The team pays players over $200 million per year.

The team gets over $225 million per year… per the revenue sharing agreement… and that number will be heading north REAL soon.

Pay the OC $5+ million per year to make his decision to leave a tough one. Give Ben Johnson his bag of cash!!!

uhhhh…. were you thinking of Goff’s fiance???

She’s hot enough to melt hell, but to the point? No…I was saying how good Goff has been.

It is so much easier to root for Dan than to try to tolerate the previous sloth that infested the head coach’s office prior to him.

Remember when Patricia talked about the real season started in November? I’m not looking it up but I did last week and he was like 3-18 in November and December. Dan Campbell is 7-6-1 in two season w the same roster at times. 3 of those losses were by a combined 7 points.

I saw this posted by a Patriots fan, and thought it was appropriate here… Mornhinweg, Mariucci, Marinelli, Schwartz, Caldwell, they were at least likable–albeit, to different degrees. 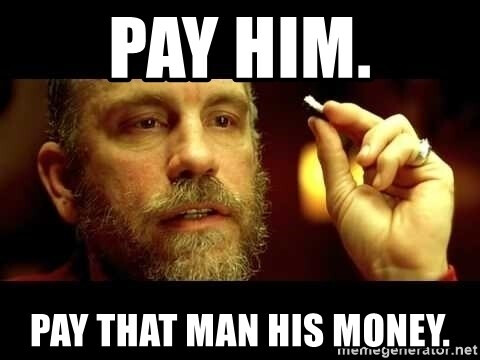 Personally I think Ben would want to stay another year and as an owner I would want him to have more experience. With 10 years in the league his highest position until this year was position coach. A completely different set of duties to being a head coach and at least one level removed from the head coach. Head coaching duties are vastly different from position coaches. Coordinators are close enough to watch and absorb some of the differences - I am not sure position coaches are. Also - nobody had to game plan against Ben until this year. How does he look next year with a full year of film on his play designs and tendencies. Does he still look as good? I think he will but as an owner I would want to know. Finally, some of the best x’s and o’s guys simply cannot translate well to the HC position. Norv Turner is a great OC but failed multiple times as HC. As an owner and personally if I were in Bens positon I would want some time to study the HC position and prep for it before jumping into the deep end. I realize that may not happen but Ben seems like a level headed guy so hopefully he thinks this way.

Lions wide receiver Amon-Ra St. Brown spoke to the media after last Sunday’s game. He revealed a goal Johnson had for the offense. (via Heavy.com).

Defense, offense, special teams. Starting as an offense, I don’t think we punted once. Coach (Ben) Johnson talked about that a few weeks ago. After every game we put up the drive chart. For the most part it’ll say touchdown, field goal, upon whatever it is throughout the whole game. He said he wants to get to a point where it’s all green which is all points and we did that today,” St. Brown said.

Never punting in a game is of course very rare. No NFL team had done it in a regular season game in four years before the Lions did it Sunday. The Lions hadn’t done it themselves since 2017, and they had not done it in a home game since 1971.

But Johnson was open with his offensive unit about wanting to have a perfect game, with points on every drive–no punts, and no turnovers. Even if it never happens again while Johnson is running the Lions’ offense, they got it done against Jacksonville to pay off his belief it could be done by this particular group. 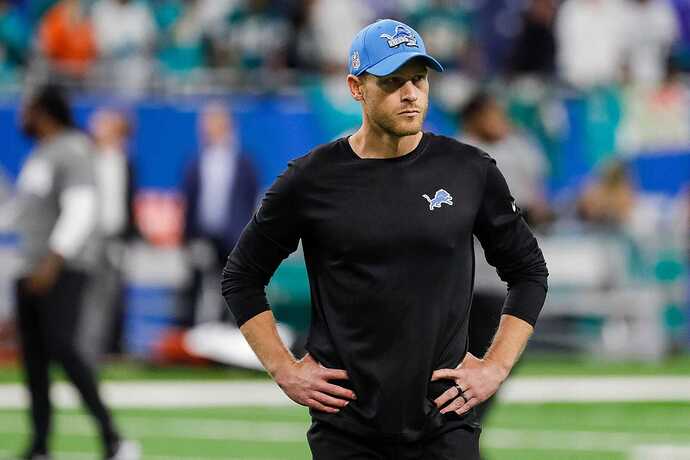 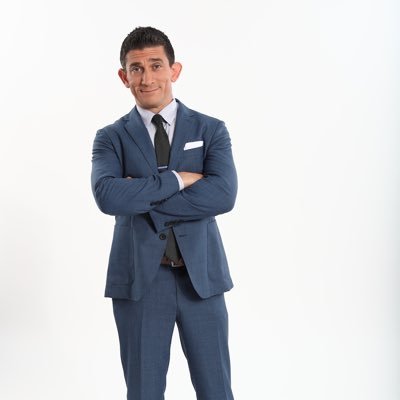 @AndrewSiciliano
Lions has 8 possessions (other than taking a knee) Sunday. Lions scored on ALL 8 possessions. No @NFL team had scored on every possession in a regular season game in 4 years. @NFLResearch
Mongoose December 10, 2022, 12:30pm #49

He’s gone, too good at his job not to get a Head Coaching opportunity this off-season

The “I love it here, etc” talk very well could be true. At the end of the day it’s all coach speak. If he gets offered the opportunity he won’t be calling plays for the Lion’s next season

No NFL team had done it in a regular season game in four years before the Lions did it Sunday.

Didn’t the Seahawks do that to us this year?

I was thinking that also but then I remembered, they didn’t score on every drive. They didn’t punt either. They missed a FG in the 3rd qtr

Who needs a head coach and who might the candidates be?

The season is almost over, which means the dark day known as Black Monday will only get closer and closer. A few head coaches will end up losing their jobs. Panthers head coach Matt Rhule and Colts head coach Frank Reich have already been let go this season and a few others could join them. Here are a few other teams that could be looking at a new head coach.

Denver Broncos: See the previous section. Watch the Thursday night game against the Colts. Or really just about any Broncos game this year. Nathaniel Hackett doesn’t appear to be the guy to coach this team past this season and the Broncos need to improve rapidly to get Russell Wilson back to playing productive football.

Arizona Cardinals: Kliff Kingsbury received a contract extension this year, but things have been trending down for too long in Arizona without any real sign of progress over the past year or so. To be fair to Kingsbury, general manager Steve Keim should be sent on his way as well if Kingsbury does get the boot.

Houston Texans: Hey man, sometimes the game is the game. Lovie Smith was set up to fail this season for a team that didn’t even really want to hire him in the first place. The Texans are lucky that NFL coaching jobs are extremely coveted and they’re likely to have the first pick in the draft because otherwise this would be a stay-away situation. They’re on the brink of having their third head coach in as many years.

New Orleans Saints: This is probably a dark horse option here, but Dennis Allen hasn’t really worked out. He’s a great defensive mind and play-caller, but at the same time, he’s failed the Saints as a head coach. Maybe the Saints can get Sean Payton back in the door with a little coaxing, but so far it appears that Allen has been a decisive downgrade for them.

There will undoubtedly be a team or two that surprise and make some cuts at the end of the season, but those seem like the clearer options for teams that will be looking for a new head man. Here are a few candidates to keep in mind as the coaching carousel picks up over the next two months in the NFL. 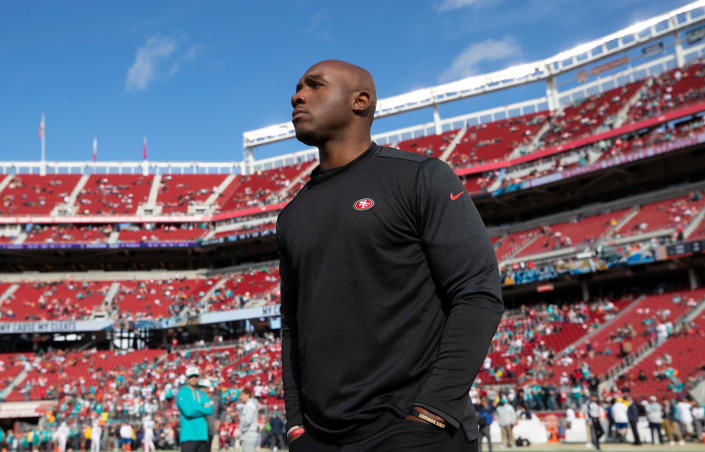 DeMeco Ryans, 49ers defensive coordinator: Ryans has arguably been the best defensive coordinator in football since he took over for Robert Saleh last season. Two years of elite production will get him hired by someone looking to bring their defense into the modern age.

Shane Steichen, Eagles offensive coordinator: Jalen Hurts has outperformed the expectations of many this season and Steichen will get a huge chunk of credit. He’ll probably end up leading someone’s team next season.

Dan Quinn, Cowboys defensive coordinator: Dan Quinn has been on these lists for a few years now and he has another strong case to re-enter the head coaching ranks after leading Dallas’ defense to another top season.

Lou Anarumo, Bengals defensive coordinator: It’s funny that Anarumo finds himself on this list because he wasn’t even the Bengals’ first or second option when they were looking at defensive coordinators. Still, he’s done a fine job as and should get a serious look at head coaching gigs after the season. 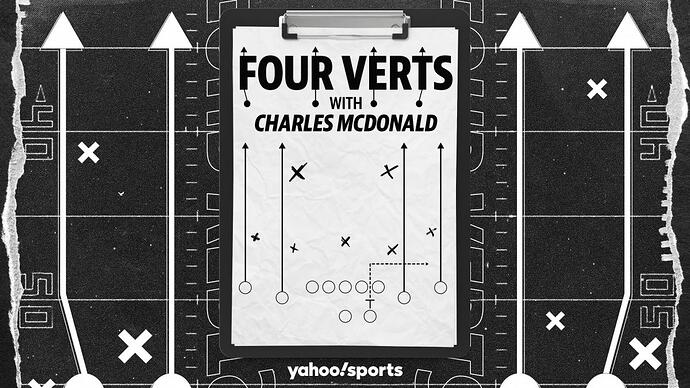 Trevor Lawrence is becoming The Guy; NFC South shouldn't be allowed a playoff...

In this week's edition of Four Verts, Charles McDonald spotlights Lawrence's improvements and delivers a stump speech in his candidacy for NFL commissioner.

The Lions tried to keep Johnson under the radar on Hard Knocks. It’s out now but I think he stays for another year or 2. You got to have a plan when you interview for HC, ie hiring assistants etc. Learning under Campbell is a plus for him.

Anarumo was Dan’s Interim DC in Miami. Zac Taylor as his OV. Even interim HC Dan puts together great staffs.

Remember when Patricia talked about the real season started in November

Every last thing out of that fool’s mouth was poser bullshit.

Honestly, I doubt it. Have it on extremely good authority he will be. If anything he will get a big raise. He loves it here. Will we eventually lose him? Yes but in like a 2 or so years. If someone throws a shit ton of money at him could he leave? Sure. But the word is 1) he loves it here…LOVES DAN. 2) wants to hone his skills…

Honestly, I doubt it. Have it on extremely good authority he will be.

One other aspect to Ben’s taking a new job could be filling out his staff. Due to Ben’s vacancy if he left, the fact that MCDC and BH are likable, and that Ben has only 1 year experience as an OC, it might have been tough for him to poach or know who to poach to effectively populate a staff. My guess is all those factors will coalesce next year if we don’t take a step back offensively.