A man on a Mission: Charles Harris

Interesting article on Harris but another nugget on the FA that the front office targeted that I’m not sure I read before. 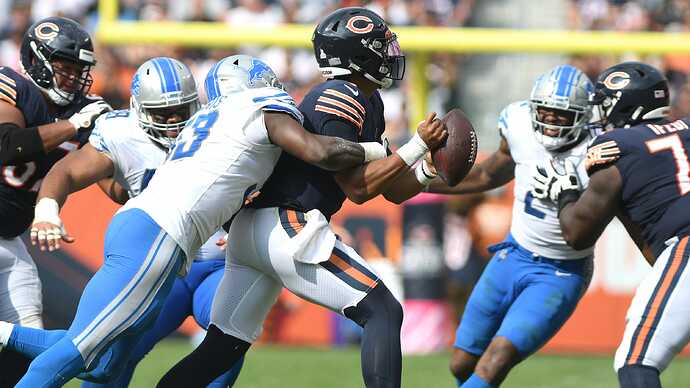 'A man on a mission': Charles Harris racks up the sacks, gets career on track...

After failing to live up to the lofty expectations that come with being a first-round pick in Miami, Harris has found himself in Detroit.

On type of players targeted, from the article:

In the earliest stages of the team’s rebuild, there was little reason to approach it any differently. But general manager Brad Holmes and coach Dan Campbell also sought a specific type of player when they were perusing the market for bargains. They targeted the misfits and rejects, players coming off injury and those who had failed to live up to outside expectations.

“Probably the best thing about all of these guys we’ve signed is I think they’ve all got something to prove," Campbell said in March. "They’ve got a little bit of a chip on their shoulder, whether it’s, ‘I’m coming off an injury’ or ‘They were trying to reduce my salary’ or ‘I’m a guy that they didn’t want anymore’ or ‘I’m a guy they think is washed up.’ All these guys have something to prove and, man, so do we.”

For one reason or another, many of those additions haven’t panned out. Wide receiver Breshad Perriman, for example, couldn’t even crack the 53-man roster out of training camp, while another veteran receiver, Tyrell Williams, hasn’t played since Week 1 because of a concussion, a year after he missed an entire season due to injury.

Others, like wide receiver Kalif Raymond, have done well with an expanded opportunity.

But no one on the roster has proven more than outside linebacker Charles Harris.

Coming out of Missouri in 2017, Harris had failed to live up to the lofty expectations that come with being a first-round pick. He flamed out in Miami — the team that selected him No. 22 overall that year — after three seasons, recording just 3½ sacks in 41 games.

On Harris use on previous teams vs now in Detroit, hopefully he can keep it up:

…Sheppard conceded the remaining 1% was about putting the player in a better position to succeed with his skill set. The coach noted previous teams had asked Harris to do things he wasn’t built for, such as play some more interior defensive line alignments.

“I think he’s fit to be a true outside linebacker, edge player,” Sheppard said. "You saw previously, guys worked him inside, five-technique, even in some systems all the way down to the 4i (technique), and that’s not what he’s built to do. He’s built, in my opinion, everybody’s different, but to play on the edge.

“He’s a very physical, quick-twitchy player. So he gets on and off the blocks well and he does things that a lot of other people — you have to have a motor to do a lot of things that Charles Harris does on tape, and it’s nonstop from the first whistle to the last.” …

I’m thinking there are a lot of these kids who probably could be labeled “busts” or flame-out when they come out of college, that could flourish a couple years later, if given a chance. Many of them, even though they have been playing the came since there were young, may not have the brain development to truly understand or process the nuances of the game, until they get a little older (25 or 26 y/o). By then, most teams have written off the off, and they never see the field again. If I had to guess, I’d say you could probably find a very solid 20% of those types of players, who are leaps and bounds better at 25 y/o than they were at 22 y/o, and could make a roster.

Often times it’s about fit as Dan explains in the quotes above.

For anyone who doesn’t understand how this happens see Kyle Van Noy.

His sack yards are up there averaging 10yard loss a sack

More yards then quite a few others who have a couple more sacks.