Aidan Hutchinson--PFT Rookie of the Week

The rookie usually does his best work when chasing the quarterback. On Sunday, he pretended to do so before dropping into coverage and made an impressive interception that sparked an upset road win over the Giants.

It came with less than seven minutes in the first half. The Giants led the game, 6-3. On the second and six play that started at the New York 31, Hutchinson started to rush and then backpedaled, snatching the all at the line to gain and returning it inside the 20.

Hutchinson also recovered a fumble. The interception made him the second player since 1982 with at least five sacks and two interceptions in his first 10 career games, joining Leslie O’Neal, who did it in 1986. 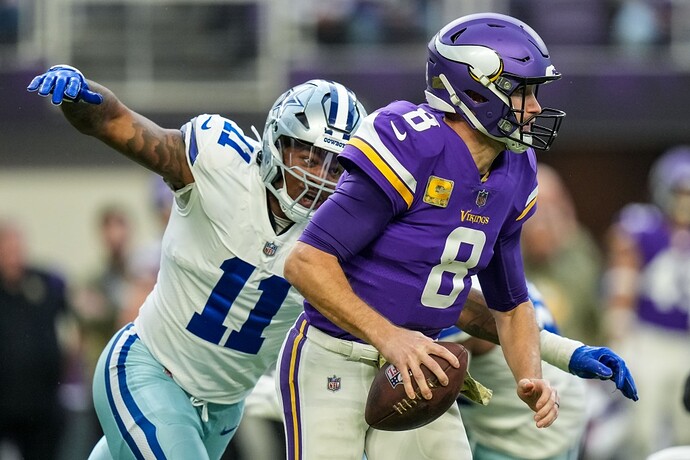 It’s awards time. It’s time for awards.This is the spot where I fill a few paragraphs explaining what the awards are. After 10 prior weeks, I don’t really need to do it.So we can get right to it. Five award winners. Plenty of other finalists for each...

Alim McNeill also gets an honorable mention for Defensive Player of the Week:

A week after being neutralized by a heavy running attack that kept the pass rush from getting going, the neo-Doomsday Defense shut down the Minnesota offense, sacking quarterback Kirk Cousins a career-high seven times. Parsons was the unquestioned leader of the pack.

It started on the opening drive. Parsons chased down Cousins and forced a fumble. Although the Cowboys scored only three points on the short field, it set the tone for what became a blowout — the biggest road win in franchise history.