Re: Hutchinson vs. Walker, I’ve spent a lot of time talking to coaches and scouts the last couple of days about the difference between the two. And there are a few takeaways I’ve gotten from those conversations.

First, Walker isn’t all traits. It’s true that many of his splash plays are in chase-down situations and that he was more consistent as a pass rusher from the inside than the outside. It’s also true, per NFL folks, that he needs to develop moves as a pass rusher if he’s going to be a dominant edge guy. But he’s got rare raw power for a player at his position, and below is one play that shows it.

Second, the arm-length/narrow-build thing with Hutchinson is a bigger deal for some teams than others. And third, the way the Georgia offensive line swallowed him up was a real problem for some coaches and scouts, worried what’ll happen when he’s being blocked by guys like that every week.

“There’s a difference between liking and loving a guy,” said one head coach without a dog in the fight. “To take him that high, you gotta love him. I like him; he’s a good player. But I don’t think he’s special, and at that position, based on who you’re going up against, you gotta be special to justify a pick that high.”

And it feels like that’s what this is about for a lot of people—can Hutchinson be special? Can Walker? It seems like if the Jags take the latter, it’ll be because they think he’s got a better chance to get there, even if there’s also a better chance that he winds up falling far short of the level a first pick should reach.

The good news, for the Jags, is that if it’s between these two, the character assessment on both seems to be spotless. Which is probably why Kayvon Thibodeaux—who’s turned some teams off through the process—really hasn’t been part of the conversation, particularly in a year when ownership has been prioritizing culture and alignment with his football folks.

• You hear a lot about owner involvement in the days leading up to the draft. So those questions have come up in my conversations: Would Jags ownership push the safe play, in Hutchinson, here? Would Jets ownership allow Joe Douglas to take an offensive lineman for the third straight year? Would Lions ownership sign off on another corner in the top three?

• I thought this line from an AFC exec sort of summed up how the league feels about the group going into tonight: “There just aren’t a lot of needle-movers. There might not be any. But there are a lot of solid guys.” 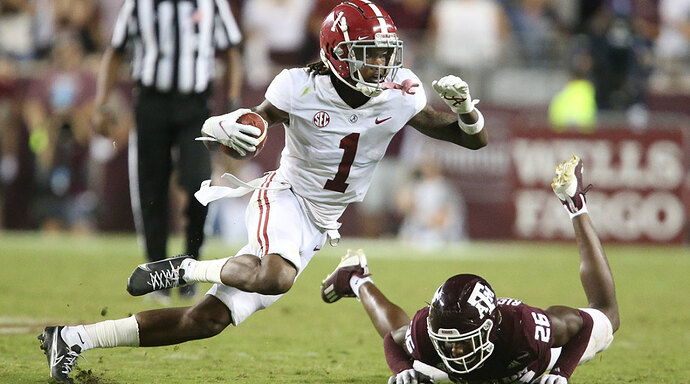 Drop-offs at certain positions could lead to trades, the speedy Alabama receiver is connected to a bunch of teams and more last-minute nuggets.