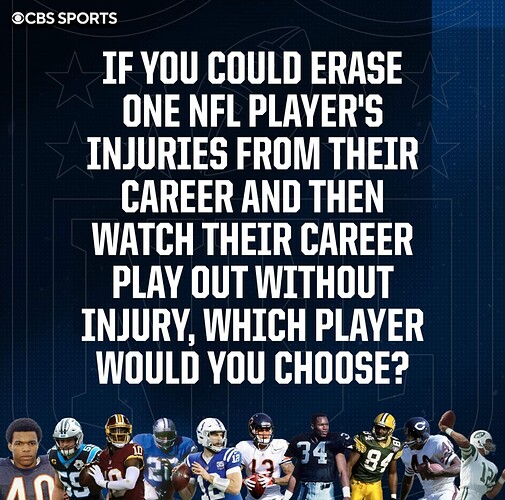 Billy Sims was my first thought for the Lions prior.
Reggie Williams and Utley are my sentimental picks

Billy Sims was my first thought for the Lions prior.

That was the first one that immediately came to mind.

My first thought was Billy Sims.

But also I would have loved to see Jahvid Best minus the concussions that ultimately ended his career.

Some other names that come to mind for me as a Lions fan:

First thought for me was Charles Rogers.

First thought for me was Charles Rogers.

My first thought was Billy Sims as well, but Rogers might be it.
The guy could have been HOF. The injuries led to opioid addiction and the rest is SAD ass history. What could have been!!

somewhat curious about chuck hughes who, in perfect detroit lions history, is the only NFL player to die on the field.

I mean look at his college records:

Hughes played college football at Texas Western College, now the University of Texas at El Paso,[2] where he is still listed in the all-time football records; his accomplishments include:

Non football but the biggest what if in Detroit sports for me was always Konstantinov. He was blossoming into one of the most feared defensemen in the league. How many championships would they have won if he got to play through his prime with him and Lidstrom back there?

I would have loved to see what mikel leshoure would have been without that Achilles injury. The guy was big fast and powerful coming out of college. He never got that burst back.

In my world
Lions still draft Barry after a healthy Billy

Possible. Billy would have been completing season 9 at age 33 in 1988. The only issue is would the team have been bad enough to draft 3rd where Barry went? KC takes Barry then and not Derrick Thomas at 3? Butterfly effect indeed.

I’m torn on this one but I’d have liked to see sterling sharpe without that injury. Same for tony boselli.

In a non football sense The two I’d pick in baseball are Joel zumaya and Mickey mantle. Mantle without that devastating knee injury would have done things never seen before. Basketball would obviously be grant hill.

Reggie Brown he was turning into a stud linebacker

So much changes
Including who lions draft over the next half of Billy’s career
But if we play the make up game
My theory is lions make a trade up nabbing Barry so he’s still a lion.

It isn’t an injury but can we go back and stop Eric andolsek from getting killed? He was a rising guard and would have made the lions very good up front playing next to Lomas and glover.

It isn’t an injury but can we go back and stop Eric andolsek from getting killed? He was a rising guard and would have made the lions very good up front playing next to Lomas and glover.

Can you imagine that line? Lomas, Andosek, Utley and Glover!! Top it off with Barry behind them