Ben Johnson is Killing It

“I mean, no one even knew I had the ball,” St. Brown said. “I don’t even think the safety that was looking at me knew I had the ball. All I hear from the defense is, ‘Oh (expletive).’ And I knew at that point it was going to be a big play.”

I fucking love that quote. That is 100% awesome playcalling and coaching. Since the duo of Campbell and Johnson took over last season this offense has been pretty damn good.

He fooled the cameraman, which happened at least twice today.

Love it! The jet sweep. Washington did that to the Lions D as well on that fourth down. 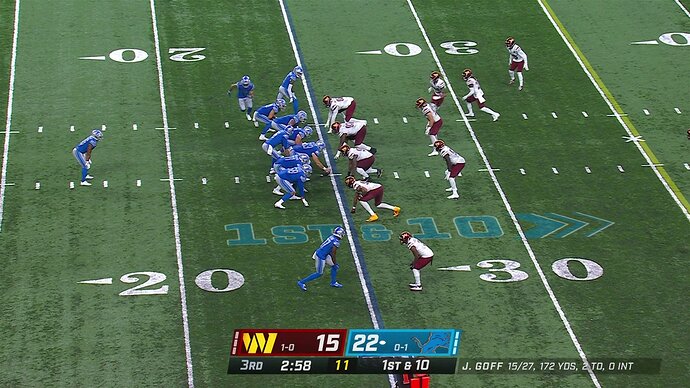 And they’re doing this with very little help from Chark. I think St Brown has to be more of a focus for the defense in the future, so that has to open up things for Chark, right? It was supposed to work in the opposite direction.

Add Jameson Williams to the mix

NFL is in trouble.

Right after that play my first thought was Jamo has that and it’s a house call and it’s not even close.

Whats crazy is we still get to see what Jameson Williams brings to this offense. Wha about if Hockenson and Chark start to come around. What about when our entire starting interior OLine get healthy. What if these guys quit dropping so many balls? This offense may be operating at 75% right now and they have been pretty damn good.

That’s without even mentioning guys on defense like Amani, Jacobs, Romeo, Levi, Paschal, and Melifonwu we are missing.

I am very encouraged by the way this team is playing and we should have major resources coming back after the bye. If we can win 2 of the next 3 and head into the bye 3-2, we have a real good chance coming out the bye strong.

Through two weeks (mostly) the Lions are:

This is despite all of the injuries and (IMO) merely passable execution.

If Jamo is this guy

Statistically we are top 5 without him. It feels like we are missing on a lot as well. Imagine if Chark catches that TD or Goff doesn’t barely overthrow him right before the half. That’s two huge plays that was there for the taking.

With Jamo and our starting interior OLine we are definitely top 5.

I don’t even think Jared has played all that well either. I mean I think he’s played fairly well outside of the awful twenty minutes week one but his ball placement isn’t what it should IMO will be. Not consistently at least.

Right after that play my first thought was Jamo has that and it’s a house call and it’s not even close.

Absolutely. Maaaaan, that would be fun to see.

OTOH, if it’s Jamo you’re staying home defensively. And that’s the beautiful thing about that kinda speed. Jamo might not be what he will be for a year or two, but the defense MUST respect that speed. Just as a decoy he’s gonna do damage.

We could potentially make a hell of a run the second half of the season if everyone actually gets healthy and plays up to their abilities.

Through two weeks (mostly) the Lions are:

This is despite all of the injuries and (IMO) merely passable execution.

If Jamo is this guy

Lions are scoring 35+ points per game…

and that is with O line injuries and no Jamo.

The rest of the NFL is hoping and praying that SOL is a legitimate issue….

Outside of just calling what it takes to score, I think what I love the most about Ben Johnson is the brand of offense he is creating. The run and pass mix is fantastic, and easily one of the more entertaining products to watch. Been like this since he took the helm last year.

Players from around the league watch other teams. I’m sure there have already been a few guys moving the Lions to the top their potential trade or signing list.

Just to put that double move in context for those that may not follow recruiting, etc.

Kelee Ringo ran a 10.43 100 in HS. He’s legit track guy fast. And Jamo just accelerates away like it’s nothing.

Just to put that double move in context for those that may not follow recruiting, etc.

Kelee Ringo ran a 10.43 100 in HS. He’s legit track guy fast. And Jamo just accelerates away like it’s nothing.