With the NFL Draft less than a week away, here is what we know. There are 4-5 teams that could clearly use a QB (Carolina, Atlanta, Seattle, Pitt, NO), but it’s a pretty darn weak QB class…. It’s possible that each of these teams would rather let “A” guy fall to them at their current pick, than trade up for “THE” guy, as there may not prove to be a single top 24 NFL starter anyway.

Then we have the top 2 most intriguing WRs and the presumed most dynamic CB unable to workout out. If Stingley put on a Patrick Peterson like display, or London ran a 4.49, or Williams ran a 4.32 with a 40” vertical, then we might well have 3 guys secured in the top 10….

The biggest challenge of this draft is that there are so many flavors, but nothing jumps out as generational… Garrett, Lawrence, Suh, Calvin, Ramsey….

I have no idea how I feel about these guys.

I really like Dotson and Watson but I think I prefer Dotson because of his outstanding hands. Really low drop percentage just like St. Brown. It would be awesome to have a group of wrs that don’t stall drives with drops.

I also really like Lloyd and have a feeling he could be there at #32.

C Cross- I could be really wrong here, but he walks a fine line between sticky and holding. I think his long light frame will be challenged when guys across from him are A Donald or Nick Bosa. His waiting for Pro Day to bench, then doing just 20 reps validates my strength concerns. A late one- early 2 guy? Sure I could see the potential, but not a day one starter and stud in the top 10…

I just can’t get behind this Cross take. He’s an elite pass-blocker, in a league where pass-blocking is by far the most important aspect of playing OL. He’s got long arms for his size but I wouldn’t call his frame overly long (hell his height falls in the 28th percentile), and even the best tackles in the league struggles with Aaron Donald and Nick Bosa. And his functional strength is fine, damn the bench reps. He’ll never be a mauler but you don’t need a mauler. I agree with Doug Farrar’s take, he’s basically David Bakhtiari 2.0, same size, very similar testing:

NFL Comparison: David Bakhtiari. Like Bakhtiari, the Packers’ three-time Pro Bowler and two-time First-Team All-Pro, Cross tends to make everything look easier than it really is with an NFL-ready quiver of skills. If your offense is pass-heavy with concepts from RPO to all-go, and you need a tackle to get freaky in space when it’s time to run the ball as an ancillary idea, there’s no better option in this draft class.

M Willis- I know the hate is coming

Boom - everyone the lions draft

Bust - the entire rest of the league and draft class, except for a handful we can sign as FA in a few years

You are definitely one of the more knowledgeable posters regarding the draft, so I have no reason to challenge your opinion.

I will say that I saw two guys in tank tops that didn’t look like the others at the combine. Hutch… and Cross… 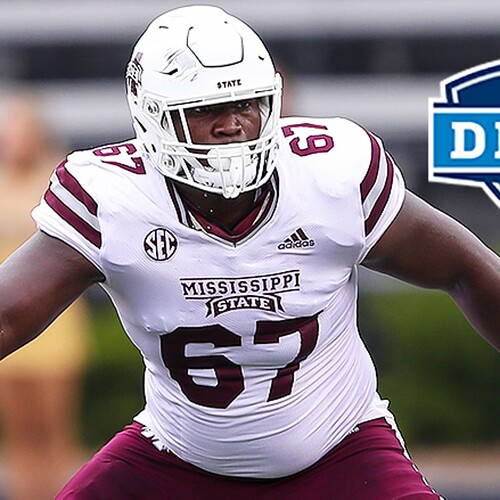 Neither look like they are very strong men standing still. So when Hutch had his strength guy rowing every rep with him, and Cross did just 20 at his pro day after skipping the combine…

I’m just connecting what I see on film, what I see in a tank top, and what the numbers say. I get that bench press isn’t a definable metric, but it’s not irrelevant.

For the record Baktiari (who looks and plus nasty) put up 28 reps at his combine, and that didn’t surprise one bit.

This is a wayyy to long winded way of saying I think he’s a bit grabby on tape now, and I think it’s because he doesn’t have the initial shock in his hands.

but it’s not irrelevant.

Devonta Smith probably can’t bench 225 once and he’s the best CFB WR of all time.

I get that. I’m saying when we are typically projecting a small school guy, it’s usually his off the charts measureables, and video game stats we are projecting success from.

Willis might have run for 878 yards, but he was grinding a lot of that out. He broke a ton of tackles, dragged defenders etc.

I truly think whoever it was that threw out Tyrod as a comp was spot on. Great leader. Big arm. Thick frame. Runs more like a RB than a QB. Willis deals with far to much contact for my liking. If he truly has 4.3 speed, and nfl level instincts, he should be jump cutting and breaking 60 yard runs.

A QB leading FBS in yards after contact is not a great stat. Especially not with just 878 yards rushing. That means he only had about 2 yards before contact and was still making the decision to run?

I feel like you go out of your way to challenge anything I say, and often do so in a sarcastic question, or a five word response.

First off- I have no idea why Devonta Smith and Charles Cross strike you as similar situations, and secondly… I’m pretty sure we are all talking about the NFL DRAFT brother???

A) I am not saying with certainty that Cross will fail, but unless he gets serious about the weight room, I think he will struggle with NFL size and power.

C) I don’t know why a guys college success is being used to project another man, at an entirely different positions pro success

I watched the highlights, he appears to me to be less powerful than other elite prospects, and while he’s not allowing sacks, he does appear to be a bit grabby.

Bailey Zappe likely can’t do 5 reps either, and it clearly didn’t stop him from throwing 60 plus TDs, but since his position requires elite arm strength, and he does t have it, he’s not going to be drafted high.

LT requires enough power to bully another big strong man. If bench didn’t matter, they wouldn’t measure it. I would never say- Raihmann should go #1 because he did 32 reps…

Willis is nowhere near the runner of Lamar or Murray.

Sure he racked up a bunch of numbers against weak competition but looked pretty average against better competition.

He had a nice 67 yard td run against Auburn but it was a garbage td. It was in the 4th quarter of a blow out.

I feel like you go out of your way to challenge anything I say, and often do so in a sarcastic question, or a five word response.

First off I’m not intending to ever come off this way. You and I just disagree on how we view a certain number of things, and given that this is a discussion board, I am voicing my opinion just like you voice yours to create discussion. There is absolutely nothing wrong with disagreement, and I am never trying to directly argue with whatever position you take. I really do appreciate the thought and insight you put into your posts, and I enjoy reading what you have to say.

Again, in the future, if this is how I am coming off, then I’ll do better to not be like that.

Ah, I see why you’re taking the position you are. The bench doesn’t matter for lineman because the drive with which you use to push someone back actually comes from your legs and hips. The arms and chest are ideally irrelevant. Now in pass protection, you use your chest more, but you aren’t supported by a bench and you aren’t pressing directly against gravity. A landmine press is a far more realistic exercise to simulate the press of pass pro.

C) I don’t know why a guys college success is being used to project another man, at an entirely different positions pro success

Again, I should have clarified. I’m not saying Devonta not pressing 225 is going to mean Cross will be successful. The two are completely independent of each other. I’m saying that a good or bad bench does not translate directly to success.

Now usually your gym rats who squat 700 pounds also spend a lot of time benching and can bench a lot too. That 700 lb squat is a lot more valuable though, and that’s what translates.

If bench didn’t matter, they wouldn’t measure it.

I disagree. They do it at the combine because it’s a “sexy” event that gets a lot of viewers for the combine. Not because it helps the teams. The teams get info from the colleges about the weight room performances to judge how strong someone is, I’d assume.

I’ve suggested this on here before. The bench needs to be replaced with a 315 lb squat. Same as the bench. How many reps can you get?

But… we put a tracker on the bar to measure the speed at which the player moves the bar. Then, adding the weight, a simple calculation tells you how many watts of power a player is putting into the bar. Teams can measure how much maximum power are they getting from someone, and how quickly or slowly does this guy fatigue?

My friend who is a strength coach at a high school here in Huntsville has purchased several of these chips and uses them for his players. They give a lot of useful information and can better prepare coaches for games.

I put very little stock into the bench. It’s a very specific test for a very specific type of strength. There’s so much more to strength on the move, standing, bent over, off-balance, etc… that the bench doesn’t test. As long as you aren’t an extreme outlier, it’s fine. I could compose a list of guys who thrived in the league despite poor bench numbers, but just at a glance, it’s way too long.

Winfrey looked like the best player on the field during the senior bowl. That may have left a more positive impression on our coaches than his full body of work

I think Mafe could have been in the discussion, and over the week Travis Jones was an animal.

Winfrey has all the tools, and he knows he was auditioning to be a millionaire.

He’s got heavy hands, twitch, and instincts to weave into the backfield. He also tends to take a lot of plays off from what I’ve seen.

I’m not a fan of drafting Willis.
The second tier competition he has faced up to now, is nothing close to what he will face in the NFL.
Keep him contained and he’s going to get hurt.
I’ll root for him if he’s a Lion, but, I rooted for Chuck Long and Andre Ware, too.

I’d like Natty to weigh in as I would presume BigNatty stands for beastly natural body builder?

These are young men who lift weights. Period!

They box squat, bench, curl, run, do medicine ball work, kettle bells, shrug, and do military press. They do all of it.

It’s not coincidental that guys who look like Bosa, Garrett and Donald wreck games.

This seems like a silly conversation. Really strong guys are often better at football, than weak lazy ones.

There is a difference between moving a guy up the board because of his bench- NEVER DO THAT- and dropping a guy because he’s not strong enough to handle guys like Suh, Donald, Etc.

I think Mafe could have been in the discussion, and over the week Travis Jones was an animal.

Mafe was in the discussion and should have been. Winfrey was apparently dominating all week as well. I’d love to have either of those cats rotating in on the line