Campbell makes questionable decisions (but they still won, so he has that going for him)

The Lions’ coaching staff again will be facing questions regarding its decision-making against the Jets.

While the early decision to go for it on fourth down was not as punitive as many will think, a decision made late in the game by Campbell will be debated.

Wilson was able to subsequently find tight end C.J. Uzomah for his second touchdown on the afternoon, giving the Jets a 17-13 lead. 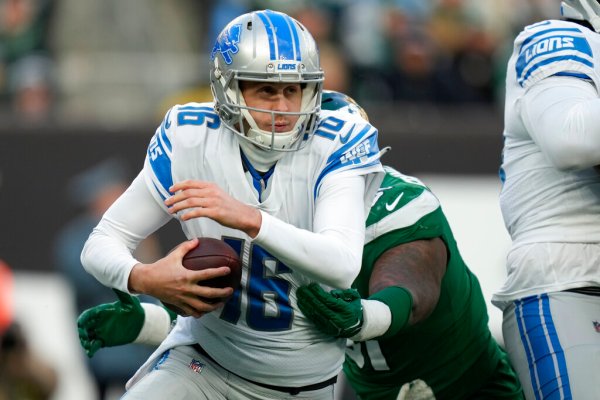 Takeaways from Lions’ win against Jets

It was billed as a matchup between two NFL teams looking to establish themselves as future franchises to be reckoned with.

Every coaching staff will have head scratching moments of you dig deep enough…look at end of Pat’s game for a prime example.

While I didn’t agree with the 54 yarder I understand it. Points were at a premium so need to try and get them when you can. I realize they ended up scoring but that was aided by the refs who missed a huge false start on the deep reception/PI.

Nobody calls a perfect game…and we can always complain because it’s not what we would have done but you can’t argue the end result.

Seriously. I’m so over boorish morons who have less footbal IQ than Dan’s bottle of screw spit piping up about “questionable” or “stupid”.

Points were at a premium so need to try and get them when you can.

Although I think it was more about the execution than the play call, taking the 3 points on the first drive might have been a good idea. However, since the Jets were pinned deep in their own end, it worked out with Raymond’s punt return.

Unless it makes the game a two score game late or to take the lead late, NEVER take 3 points when you are less than 1 yard away from the end zone.

My 15 year old son understands that the Khalid Raymond PR TD is an extension of that offensive drive and “failed” 4th down conversion. That was good football.

outside in some wind (granted not much) at the extreme range for that kicker? no, you take your pro bowl punter and pin them. had they been pinned inside the 5 wilson is crappy enough to force something.

Dan’s decisions here were NOT mistakes at all. This writer is full of shit. To beat the Jets you need to score TDs when you can and we had an opportunity to do just that. Combine that with a back up QB coming in even if we fail on 4th down Wilson is in a HUGE hole. I have ZERO issue with that decision.

Later in the game ANY points were necessary. Our kicker could not get it done. In a tight game I have no issue trying to score in that situation as the game looked like it would be very, very close and that FG may have been the difference.

That Jets defense is for real.

I’ll bet you money that’s exactly what happens this offseason.

This brings me to a much larger point. If in 2023 we expect to be a serious contender, we need to upgrade at kicker. Odds are we will need a field goal kicker to make a very critical kick to advance in the playoffs. I don’t want the reason that we get knocked out of the playoffs to be because we didn’t find a reliable kicker.

yes, we had the second best passing game agaisnt one of the best Pass Defenses in the NFL rn (the 51 yard td run was a good reason but still, very noticeable tbh)

They have to upgrade. He’s definitely the weak link on ST, although better than last year’s K options.

I’ll bet you money that’s exactly what happens this offseason.

It’s a position they should spend some money on. He should have made that kick.

My 15 year old son understands that the Khalid Raymond PR TD is an extension of that offensive drive and “failed” 4th down conversion. That was good football.

Even if he doesn’t get the PR TD its still a good football decision that plays out well for the teams that make it. Even with a fair catch, look at where our field position would have been. So we would have been marching right back down to try to score again. There are obviously situations where it doesn’t make sense. I think we all seemed to agree that Urban Meyer screwed it up against the Bengals last year on Thursday Night. He went for it on 4th and goal but he did it up 14 points and the half was about to be over. If you get the TD you are up by 3 scores…but if you kick the field goal you are also up by 3 scores. There wasn’t enough time left on the clock to be rewarded with a short field after the Bengals got the ball back, and the Bengals were receiving the 2nd half kickoff. To me going up 3 scores with the field goal was the no brainer decision there, because the potential short field on the next possession was taken out of the equation.

outside in some wind (granted not much) at the extreme range for that kicker? no, you take your pro bowl punter and pin them. had they been pinned inside the 5 wilson is crappy enough to force something.

I was thinking punt as well, but I’m told that the analytics say that’s the worst decision to make in that situation relative to chances of winning after making that decision in that situation. I thought the field goal was a little too long for those weather conditions. The ball simply doesn’t fly the same.

It wasn’t extreme temps but that doesn’t matter. The cold air impacts the ball flight. You could take a robot and have them kick the exact same ball but make one kick at Ford Field and make the other kick at Jets stadium yesterday and the one yesterday isn’t going to travel as far.

Here is a snippet from a random site, but there are many places to read up on the concepts of kicking in colder weather and what happens to the ball:

“This brings us to air pressure. The Ideal Gas Law states that as the temperature of a gas decreases and while volume remains the same, the pressure of that gas becomes lower. As many footballs are inflated indoors and then brought into cold conditions for the course of a game, the pressure in those footballs may drop over the course of the game. This drop in pressure means that more of a kicker’s force is absorbed by the give of the ball, rather than being transferred to the motion of the ball through a harder surface. This can reduce maximum kick distance by a significant amount, and must be accounted for by a team in warm-ups to prevent kicking from beyond a kicker’s maximum range given the conditions. As with kicking into the wind, a kicker must ignore the tendency to try to compensate for this, as it can lead to a breakdown of technique and inaccuracy.”

Adjustments for Kicking in Different Weather Conditions - Inside The Pylon

Going for it on 4th was the right decision. You could argue against the FG, imo.

Going for it on 4th was the right decision. You could argue against the FG, imo.

Yes this. Everything worked out, just win. Doesn’t mean the FG attempt wasn’t questionable. The way that ball came up short as well, I’d like to know wind direction & wind speed on that attempt.

Robs gripe with Campbell from yesterday below:

-hated that call on 4th and goal with misdirection and missed blocks. Looked like a counter and I hate slowing down any short yardage plays. If TE makes the block it works but I’d rather line up and go straight to the hole with nothing fancy

-didn’t like the FG. I don’t hate the call but I would have punted in that situation

Completely disagree. You don’t kick a really long FG in a defensive game in an outside stadium that is notoriously tough on kickers where field position is so important unless it’s a freak like Tucker or Prater. Pinning them deep was the right call there.

Going for it on 4th on the first possession was the right call. Running the ball into the Jets line was not.