Brad Holmes brought in the league’s best UDFA class this past year.

AJ Parker could be the best UDFA right now.

100% mentioned it in another thread. Jacobs and Parker have been balling.

too early to say anything, he had to reboot the team

it’s all noise until you’re a couple years in

too early to say anything, he had to reboot the team

it’s all noise until you’re a couple years in

Woooord!
Just hypothetical projection, both of emotions and prognostications.

I saw some flashes from CB Mark Gilbert. TE Brock Wright made some nice catches.

Kraemer is looking good… Jalen will start contributing this week.

These guys are holding their own as we are down to 6th-7th players at WR and CB and OL. 4th string LB. 6th String DL.

Best part of all the injuries is how much inexpensive depth is being built. Even if these guys are drafted over for more talent or vets get signed in 2023+, these are the guys that ensure a season doesn’t hinge on a handful of starters next year and beyond.

Best part of all the injuries is how much inexpensive depth is being built. Even if these guys are drafted over for more talent or vets get signed in 2023+, these are the guys that ensure a season doesn’t hinge on a handful of starters next year and beyond.

YES! I’ve ben soaking to this lately too.

AJ Parker could be the best UDFA right now.

I think most have noted how well the UDFAs have played. I think it will require more then just hitting on a couple UDFAs. That’s a funny way to judge your GM. QB must not matter much or your FA signings or your draft pics.

But it fits the Lions, its like having your punter being the best player on your team.

Every single draft pick is contributing… and about half the UDFA.

Not sure I’ve ever seen that kind of hit rate with a rookie class before.

Part of it is all the injuries are forcing it. Part of it is this is a losing team, so these rookies and UDFA aren’t able to compete head to head with experienced starters on other teams.

Still, I’m not sure I’ve ever seen more contribution from a rookie class before… Can someone look that up?

As to QB, It looks to me like they are going to get rid of OC before QB. I’ve only ever seen Goff play this bad one other time in 10 years and it was the 7 games with Fisher in 2016.

That 2016 rams offense was one of the worst offenses in the entire league history per DVOA (see chart/link below). Todd Gurley called it a high school offense and the TE they promoted to OC had never called a play before that season either. Btw, Case Keenum started the season and went on to have a probowl year the following year with the vikings. 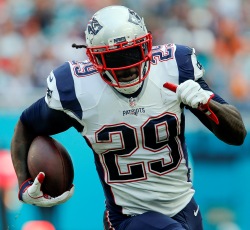 It turns out, The Year of No Great Teams may in fact have a great team. The New England Patriots head into the postseason strong as the No. 1 team in DVOA, their eighth straight year ranking sixth or higher.

I agree, but I actually liked every player Holmes drafted. I especially liked McNiel and Levi O.

However, is it Holmes fault these 2 arent blowing up backfields yet?

I asked a question in Sundays game thread:

Why does it look like our DLINE is still playing Matt Patricia 2-gap defense?

The DL isnt firing off the ball looking to blow plays up in the backfield. Instead it appears they’re one-gapping, yet reading and diagonosing the play before heading up field. At times, I’ve seen McNeil use his fantastic quickness to penetrate the backfield…but that’s about it.

Levi has yet to show the elite explosiveness he displayed on the field in college. He also has added a lot of sloppy weight and looks a lot slower on Sundays because of it.

Is it Holmes fault Levi is overweight?

Is it Holmes fault these guys arent exploding off the ball and trying to get into the backfield?

I dont know…I blame the players first. Then the DL coach AND DC.

Amon-Ra is coming along ok. Cant really evaluate him with Goff and this offense.

Jefferson looks like a solid depth RB with upside.

Sewell has done well…still has a lot of work to do to become what many predict he could be. But hes been solid.

Evan Brown came from nowhere, to looking like he may start next season.

However, is it Holmes fault these 2 arent blowing up backfields yet?

Rookie DT’s 10 games into their season. They are gassed. They have popped and shown a lot of flash, but they are def going to need to pop next year, ya know year 2 being the big leap in development year for young guys.

Yeah…I do understand it takes time to develop. But if I was the GM, HC, and DC…I’m gonna need to see more before I am ready to hang my hat on these guys for next season and the future. Especially when I see Levi O. showing up overweight and talking about who, between himself and McNiel, are gonna buy donuts or Coney Island on certain days.

Levi is a 2nd round pick, could have been a 1st rounder…hes been disappointing.

McNiel…some people had him rated higher than Levi…

I hope that isnt the case. But for that not to be the case…we are gonna need to see more from these 2 fairly highly rated DTs we just drafted fairly high.

If anything, these guys should be getting more acclimated to the pro game and start showing more.

Also…any answer why our DL looks like Matt Patricia is coaching them?

How many pressures or sacks do either of these guys have ?
There Playing because of how bad we are. The problem with Patricias defense was it got no pressure, have these 2 helped at all with that . 3 of his top FAs are not even with the team. Hell draft 2 DTs high and still don’t have a guy in the middle that can get pressure.

And last being happy there staring on a winless team. Maybe them starting is partly why we’re not very good.

The two rookies have been ok…but they’re gonna need to show more to really feel this franchise is in a good spot with the DT spot going forward.

Also…the pressure issue is a big question for mark. If we ditched the Matt Patricia 2-gap system, why does it look like we are still running it?

Maybe them starting is partly why we’re not very good.

If we ditched the Matt Patricia 2-gap system, why does it look like we are still running it?

Because we don’t have a DT that is capable of rushing the passer maybe ?

and about half the UDFA

Our high-water mark in recent history is 2013 when we got Waddle and Fauria as important contributors. So, 2 UDFA making the 53-man.

Right now we have Jacobs, Parker, Wright and Kraemer. Even if you cut out Wright and Kraemer as recent adds, we’ve still matched our best UDFA output of either of the 2 previous regimes. (Mayhew called it the 8th round, which Xanders was in charge of.)

This is why it is a little alarming they haven’t shown more by now.

Time to start wondering what is going on with these 2…

Brockers is just plain bad…but he supposedly is a good leader. However, if the perception is he is a leader…maybe that’s why Levi and McNiel havent lived up to expectation of now. The coaching staff wont cross Brockers for the fear he will turn on the coaching staff…which will start a domino effect.

And Brockers keeps getting playing despite being bad.

But… the UDFAs have been good…

Holmes has done a good job overall…I dont blame him for players that arent committing themselves, poor performance, and no pressure from the coaching staff.

Someone needs to get on Todd Washes ACE. I mean, from a players point of view I understand it is a tough season, but its crucial for McNiel and Levi to start showing more before the season ends, otherwise we dont know what the heck we have going forward and if we should draft DT in 2022. And Levi needs to stop eating all those donuts.

That doesn’t add up. They had no issue with cutting bait on Jamie Collins and his slacking and they did it in a way to preserve his image and not disrupt the locker room. They would have no problem doing the same w brockers if they felt it was necessary.

LEVI and Mcniel were not known for sack guys, they were for disruption, in fact there were scouts who were concerned about where they were taken bc of their lack of sack prowess……would just wait and see what happens NEXT year before overanalyzing…

They would have no problem doing the same w brockers if they felt it was necessary.

Agreed. I think they like Brockers as a locker room presence, but wish he was a better player. LOL