Josh Allen made a play. Heck, he made a few of them, as he should considering he’s one of the best quarterbacks in the NFL.

Sometimes the other guy is just good, and that’s the difference, and ultimately why the Buffalo Bills beat the Detroit Lions on Thursday, 28-25 — a little too much Allen.

Yeah, it stings, and it will because the Lions looked legitimate on the national stage. In fact, they looked more than that:

They looked good. And have for a month now.

It’s no longer a fluke. Not when the Lions were leading a Super Bowl contender with five minutes to go. Not when they overcame a fumble, a missed field goal, a safety, some tough injury luck and a few bad breaks to be in a position to win.

Know that before you bemoan the late clock management and the defense that gave up a 36-yard pass from Allen to Stefon Diggs with 23 seconds left — a pass that set up the game-winning, soul-crushing field goal — the Lions got the late-game lead despite not being able to run the ball because its starting guards were out with injuries.

Jonah Jackson and Evan Brown should name their price moving forward. Without them, Jamaal Williams and D’Andre Swift had nowhere to go, and Jared Goff had to deal with a blown-up pocket all afternoon.

Yet they managed 25 points.

All game, the Lions showed the kind of toughness that Campbell and Holmes keep preaching. It’s starting to look like an identity.

Yeah, the Lions lost a heartbreaker. Yeah, Austin Bryant unnecessarily threw Allen to the ground after he’d thrown an incompletion and drew a roughing-the-passer penalty that helped the Bills score a touchdown. And yeah, Williams fumbled, and Michael Badgley missed a short field goal and Goff took a safety.

But pointing out the mistakes implies that other teams don’t make them. They do. They best teams do. Buffalo did. The Bills just have Allen, that’s all. He made a couple more positive plays to offset the negative ones.

The Lions were right there anyway. Think of it as progress.

Thursday’s showing suggests more is on the way.

There’s a lot more to this opinion piece, but I thought these were the main points.

Spot on man. The young guys are stepping up. And we have a ton of draft capital. Imagine Anderson on this line, another top end CB, LB and OG. We will be winning the division within three years

I want a better QB.

Anderson on this lin

Im excited about their play, but lets see how they finish out the year before we declare they arent sol. Theyve had lots of almost big wins over the years. The benefit of the doubt is the one thing this organization does not deserve. They aren’t the sol when they prove it by winning a playoff game or a division title.

I want a better QB.

After the game, right tackle Jawaan Taylor and edge rusher Josh Allen both said the team was lacking the same energy they had against Baltimore. Quarterback Trevor Lawrence also had a stinging evaluation of the team’s effort level.

“I mean, that’s the word to describe it, it’s embarrassing,” Lawrence said, via Demetrius Harvey of the Florida Times-Union. “Everybody in that locker room feels that way too, just to – I mean, this is a playoff game for us and we go out there and laid down. Credit to them, those guys, those guys whooped us. . . . We’ve lost eight games this year, and never have I felt like we got embarrassed like we did today. That can’t happen. We’ve got more pride and work too hard to do that.” 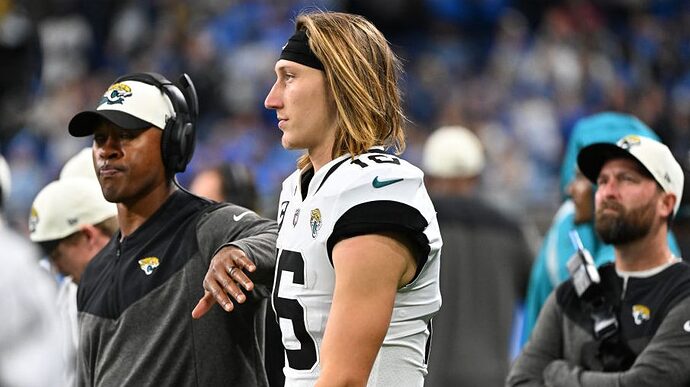 The Jaguars pulled off a last-second win over the Ravens in Week 12, but they didn’t ride that momentum into Sunday’s game against the Lions.Running back Travis Etienne lost a fumble on the first drive of the game, the Lions scored a touchdown a few...