Do coaches learn lessons? Aaron Glenn did & applied it against Kyler M

So, why didnt he remember this against the Ravens?

Also, on Amani Oruwariye INT a

Someone help me here…

However, when they rushed 3 against Kyler on the Amani INT, AG doesnt say that…

Also, Mike Zimmer when the Lions won at the buzzer…

But lets not double Justin Jefferson…

How much these clowns earning?

Seems I gotta a target on my ace…

ill suit you up, son.

Against the Ravens, it wasn’t because they were rushing three that the Ravens converted. Bobby Price was playing zone while everyone else was playing man. In other words, he wasn’t covering the guy he was supposed to: 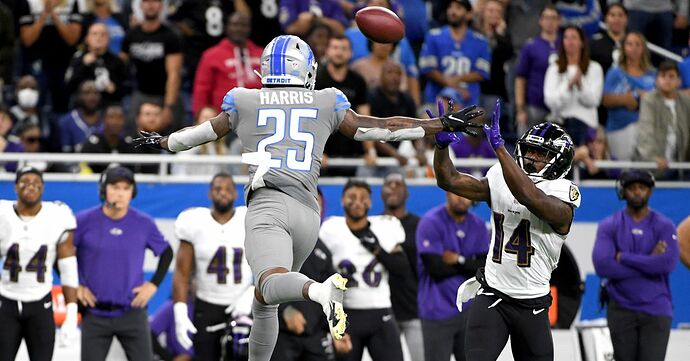 Breakdown: What went wrong on the Lions’ fourth-and-19 defense vs. Ravens

A film breakdown of why Detroit’s most important defensive call didn’t work.

Also…what about the rush 3 when Amani INT on Kyler?

Is this LIONS PR?

Dude is targeted by Stafford like 10 times a game…

Take Stafford off him right away…

And all these dudes actually get paid?

If Price plays the defense correctly, the Ravens never get close enough to even attempt a 66 yard FG. The Lions were in a game until the end that no one expected them to even be competitive.

Anyway, the Lions defense played pretty well against Lamar Jackson that day. He arguably had his worst day of the 2021 season except the Bengals game.

We all knew, going into 2021, this was a throwaway season, where the players were going to be evaluated and developed. The coaches are all pretty much learning on the job.

To paraphrase Joe Walsh, regarding the Lions 2021 season, nothing matters and what if it did.

Youre not answering the question…

AG “learned” about rushing 3 when he was with the Saints…

yet he did it against Lamar…

Also, did it agaisnt Kyler on Amari INT…

Maybe he learned when Goff won a game when Mike ZImmer rushed 3 on Lions?

ALso, my other questions still stand about Justins Jefferson…and other teams about Cooper Kupp

The criticism of rushing three on the Amani O INT of Murray is totally irrational. The defensive call worked (which was true throughout the game), the Lions crushed the Cardinals, and you’re complaining?

Im saying he is talking BS

Becuase he is contradicting his own calls on the field

A better statement would have been: “Yeah, we mixed it up…we wanted to be aggressive for the most part, but to throw off Kyler and the Cardinals, we had to mix it up here and there…”

Never rush 3 on a last second call unless you have a great cover guys…PERIOD.

Also…what about the rush 3 when Amani INT on Kyler?

While I am not a fan of a 3 man rush in most cases, and definitely not late in games while protecting a slim lead… this situation was a little different.

I wouldn’t be trying to take a victory lap on this play… because AG anticipated the play and made a great call.

The Cardinals were quite predictable with play calls based on down and distance… and they have been the last few games.

They had run short crossers on 3rd and 4th downs when it was less than 5 yards to get a 1st down. And they had run draws and screens often on 1st and 2nd downs with >5 yards to sticks.

This play was 2nd and 8… and AG showed a 4 man rush while having 2 man coverage look.
The 2 deep safeties signal to Murray to take the short read.

The Cards like to run several vertical routes to get zone defenders taking deeper drops and also have the slot WR bubble route to pull a slot DB wider… which opens up the short middle for draws, screens, and RB option routes.

When AG dropped Bryant from DE into a spy along with JRM and Barnes… they took the middle of field away, which was where Murray wanted to throw since the 2 deep look took away a deep pass. When he threw the comeback route to Green… AO was sitting on it because he had safety help deep.

AG put the defense in a great call based on the Cards tendencies.

So what about the Ravens game?

What about not doubling Justin Jefferson?

So what about the Ravens game?

Read the 1st paragraph of my response a little slower….

Says nothing about Lamar Jackson and the Ravens

Says nothing about Lamar Jackson and the Ravens

Sorry…thought you said something different

Youre not a fan… I agree

Rushing 3 is not smart

Even AG admitted it

“Smart people learn from others”

“Average people learn from their own mistakes”

“dumb people know it all”