Do the Vikings have the worst rush defense?

They have faced Aaron Jones and the Packers
and the Eagles so far, now Swift and the Lions.
They might go lower than last.

I have to post a screenshot of that tweet….
don’t get to see the Lions being called a “mismatch” in a positive way too often…. 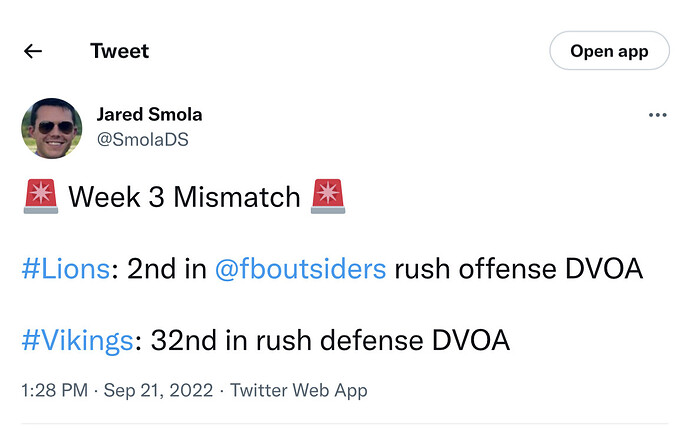 It’s worth taking the 7 or 6 point spread just on this mismatch stat. Like it’s a no brainer.

I just want to know why we’re underdog’s?
Where don’t we match up?
But, it’s cool. Respect is taken. Not given.

Probably our O line injuries and our history. But we beat them last year and lost by a 63 yard field goal.

I just want to know why we’re underdog’s?

Historically the Vikings have favored mobility at sea and quick strike ability over stout defense so I imagine that is correct. Though it’s a berserk approach if you ask me.

They are about to get tested early and often!

I just want to know why we’re underdog’s?

I think it’s two things. A. Who are The Lions , what have they done/proven? IMO nothing. we have 60 years of loss and losing culture behind us, 0-16 , 3, wins in 01, we are still rebuilding now, and have a LONG road to build to where we are winning football games, we are handling more than a few opponents that we were slated to lose to, but we won. , we have to create a winning culture around Detroit. then people won’t question us as much or count us as automatic underdogs ‘as often.’ yet we haven’t created that yet/that winning culture. B. we are not at full strength…all healthy full roster. they toss that in there to… Our opponents want to monkeystomp our asses as much as they possibly can this season and next , we are trying to be an up and coming franchise and that’s a threat, they want to eradicate the threat. So we have to play clean , play smart, be as tough as steel , do not quit, and limit injuries on top of working together to open up a can (on them) , to keep soaring .

I’d prefer to talk up an opponent

This game is so huge IMO