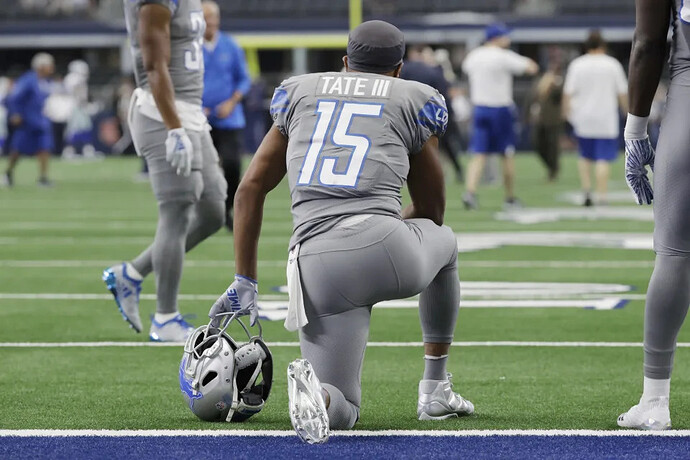 Tate was not only a fan favorite in Detroit, but also has the seventh-most receiving yards and fifth-most receptions in team history. The Tennessee native joined the Lions as a free agent in 2014 and was a major contributor on offense up until 2018 when he was traded to Philadelphia.

Tate had 416 receptions for 4,741 yards and 22 touchdowns as a Lion and also served as a punt returner and backup running back.

After playing for the Eagles and Giants, Tate failed to sign with another team until now. Hopefully, he can find a career revival with the Titans.

Strong signed with the Lions as an undrafted free agent in 2019 and has spent a majority of his career there either on the practice squad or injured reserve. He was well-liked by coaches in Matt Patricia’s staff and made the 53-man roster as a rookie. Strong played in a total of 15 games for Detroit and recorded 23 tackles and a sack.

Another former Lions player was involved in the Titans’ transactions as well, as running back Adrian Peterson was waived from the active roster.

For the record, I’m MUCH more concerned with Strong appearing in the playoffs and filling Lions fans with regret than I am Hand.

Agree. When he was in there, it seemed to me that Strong > Levi O. While I think Hand has more natural talent than either of them, you don’t magically become injury-free after years of injuries.

I wouldn’t put Strong over Levi, but you’re right about Hand. He flashed in ways that I think many of us were hoping Levi would, but availability is the #1 ability in the NFL.

I do like how quick Strong is off the line, but he needs reps to get better.

Because they’d invested in strong and reports were always good
I’m bummed he doesn’t get a chance in Detroit. I wonder if it was just numbers or if lions hoped to keep him ?

I did think Tate would sign with a contender later this year - I’d like to see him do well too.