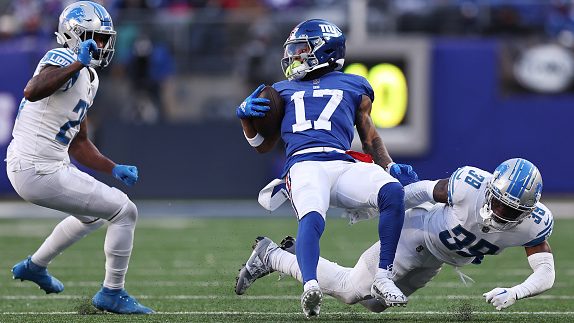 Giants wide receiver Wan'Dale Robinson is out for the season after suffering a torn ACL in yesterday’s loss to the Lions.Robinson’s injury, which was feared when he went down during the game, was confirmed today by Giants head coach Brian Daboll.The...

One wonders if the Giants will be more motivated to “out-bid” the Cowboys for OBJ or if the 40-3 smashing of the Vikings coupled with the Giants somewhat surprising loss to the Lions has separated the contender from the pretender.

It looked really bad when i saw it yessterday

100 yards on 9 receptions, honestly has been their best Reciever so far this season tbh

Damn, I feel bad for the dude. He was the only weapon they had yesterday with our defense keeping Barkley bottled up.

We need the Giants to lose for our playoff positioning.

Unfortunate for the kid, but we need to root against the Giants, Commanders, and Falcons at every chance we have.