Jared Goff has a better record, TD-to-INT ratio and QB rating than Matthew Stafford in their last 3 games.

The picks were not the biggest problem he had here IMO. It was the damn sack fumbles. I’m not sure what happens to Matt in big games where he stands there too damn long and gets sack fumbled so often. He did it to turn the tide of the game early today. Another frickin sack fumble.

I heard a crazy stat on the radio broadcast in my car. Stafford had 3 or 4 pick sixes in the past 3 games. Rodgers has had 3 pick sixes in his career.

I heard a crazy stat on the radio broadcast in my car. Stafford had 3 or 4 pick sixes in the past 3 games. Rodgers has had 3 pick sixes in his career.

I think I heard Stafford was the first QB to throw pick 6’s in 3 straight games since Matt Schaub.

In other words, both can’t win a damn game, lol.

Love Stafford, but he sucks in big games. He proves it every time he plays in one. And Goff can’t win any games, which his 0-16-1 record shows.

To further the point, Goff has the most inexperienced/ worst group of receivers I have ever seen on an NFL team. Anyone in the peanut gallery can say he sucks, but the reality is that Goff is definitely NOT the reason this offense has sucked. Goff played quite well last week in the first game with the best WR he has had all year (Reynolds).

I’d also point out that the Rams are not doing better this year even though Stafford has an upgraded team around him.

Goff will win when we put a team together here. I am quite happy with the trade.

To further the point, Goff has the most inexperienced/ worst group of receivers I have ever seen on an NFL team.

As sad as it sounds, there were some times in the early/mid 2000s that I think we were worse. We know Amon-Ra isn’t a #1 WR, but we all seem to see his value amongst the rotation. There were times where we had an UDFA like Scottie Vines that we were relying on being a #1 or #2…picked up 28 year old return man Reggie Swinton off the scrap heap mid-season and wanted him to be a go to guy.

Stafford has flat out been a mixed bag the past 3 games, as a lifelong Rams fan I didn’t like the trade, I felt Goff is somewhere between 8-12 in QB rankings, but that’s the Goff with a running game along with competent WRs

One thing I can now confirm is both QBs need to trust their line, the Rams line took a huge step forward from the past two years, Stafford is in the MVP talk, all of a sudden the Line reverts to last years pathetic level and our new MVP QB panics like a school girl throwing some of the most ridiculous pick 6s (in back to back to back) games mix in a couple of crushing fumbles and…well 3 losses in a row

Make no mistake guys, you won that trade big time

Have you been to the Rams boards? F’cking Piranhas those fans. I’d kill for 7-4.

You should link me bc I’m lazy 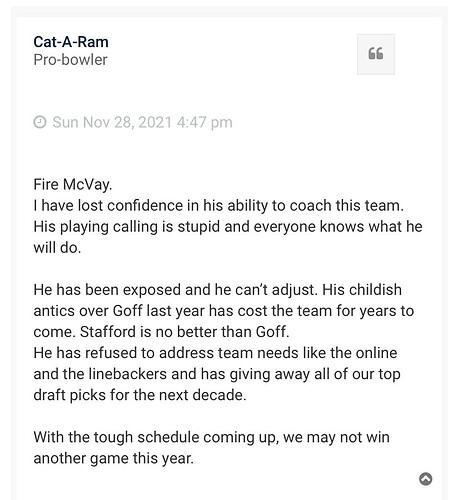 Have you been to the Rams boards? F’cking Piranhas those fans. I’d kill for 7-4.

It makes you wonder how many of them are real Rams fans who have been with the team thru the hard times vs the ones that jumped on board.

LOL - or hide in the bushes.