Ifeatu Melifonwu - Could he be the Safety that everyone was wanting?

Before the draft, I was watching some videos on Melifonwu and kind-of was wondering if he would be better-off as a Safety than Corner?

And it seems like everyone on here was calling for a Safety. I’m just wondering if you think the plan is to move him to Safety or will he be an outside CB for us? He’s 6’2.5" and 205lbs. 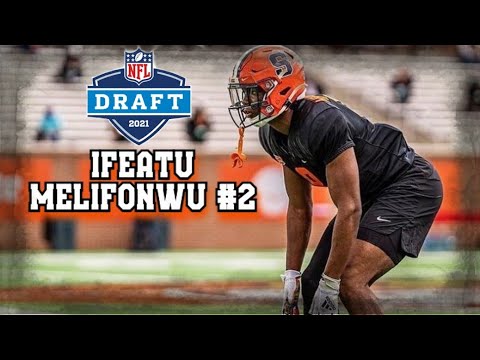 The thought did cross my mind

Upon looking up his draft profile I have s feeling he might be heading to the safety position.

ave s feeling he might be heading to the safety position.

Is he nasty enough to be the heavy nickel position? Buffalo Nickel

We gonna do any of that?
sooo much yet to be revealed

Felt obligated to comment because I just started a thread about Okudah being a safety.

There was one draft site I believe had him as a safety.

sooo much yet to be revealed

I am with you, now that we have an idea of what kind of players MCDC and Holmes are looking for, I am most interested in what the actual schemes they are going to use these players in.

There was one draft site I believe had him as a safety.

It looks like Walterfootball had him listed as a CB/S:

4/24/21: If Melifonwu’s name probably sounds familiar, it is because his older brother Obi Melifonwu was a second-round pick of the Raiders in the 2017 NFL Draft. Ifeatu Melifonwu had a solid 2020 season, recording 55 tackles with one sack, one interception and eight passes defended. It was a big jump from his previous seasons of play, but his 2020 season was good enough to earn him a Senior Bowl invitation.

Like his brother, Melinfonwu has a good skill set but is not a natural player. Obi Melifonwu was a bust in the NFL in part because of bad influences, so it will be interesting to see if his younger brother can avoid those mistakes.

He was the 13th ranked CB but the #7 Safety, interesting.