Jared Goff on 3rd down with 5+ yards to go 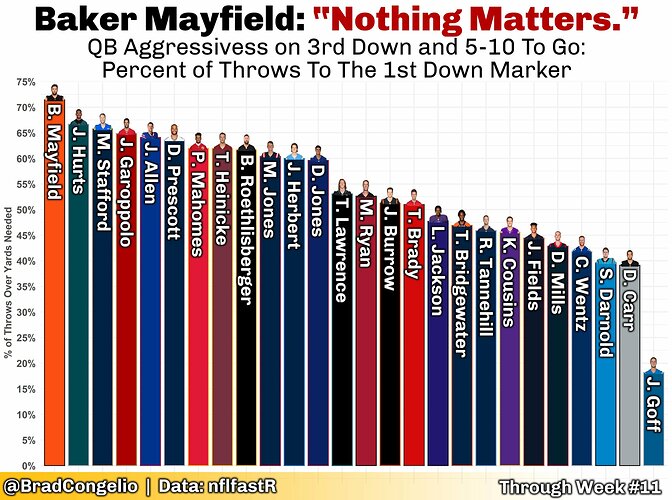 Baker Mayfield absolutely GOES for it on 3rd down with 5-10 yds. to go. (cc'ing @karnsies817). Jared Goff on the other hand? I have no words (cc'ing @JeffRisdon). Daniel Jones is surprisingly aggressive (cc'ing @StephieSmallls). Data: @nflversetweets 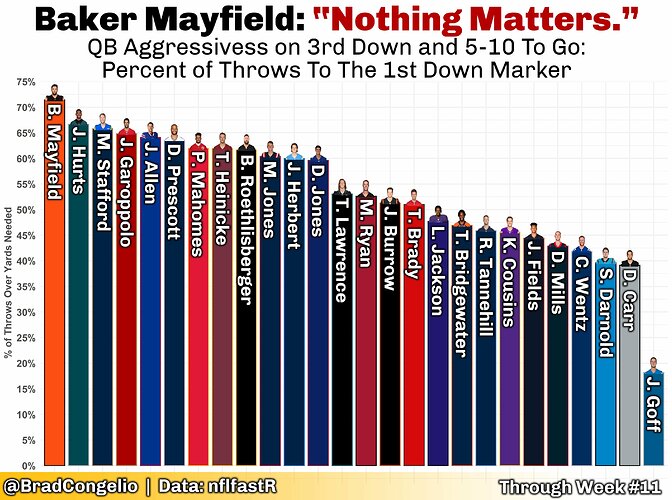 However a HS QB has a higher completion percentage on 3rd an long than any Lions QB this season. I know our WR’s suck but we have Hockenson. How hard is it to go to him on 3rd down.

Personally I think coaching is playing it way to safe in these scenarios.

Goff, Goff, Goff, did it change when Boyle was in there? With a different person doing the play calling?

Ever consider it might not all be on Goff? Or even Lynn? Maybe they’re doing what the HC wants done? Minimize turnovers. Punt and play field position for the next set of downs?

Because that’s what I’m still seeing with a different guy calling plays and qb.

Run game working more, that might have something to do with Decker coming back and as adding another lineman as a blocker. Something that could have been done with Goff as qb and Lynn calling plays. I’ll also point out, the run game has worked at times the whole season. They’ve put up some extremely long drives and run time off the clock. All with Goff at the helm and Lynn as OC.

At this point, I dont care if they throw the ball as much as possible…fuck it, not winning anyway. Dan needs to tell his QB’s and WR’s “we’re going downfield all game, if your route isnt at least to the sticks on ever play, then you’re doing it wrong. If your throws are short of the sticks, then you’re doing it wrong. Double coverage? Dont care, make a throw, make a play on the ball, fucking figure it out or gtf off the field.”…but none of that will happen.

Ever consider it might not all be on Goff? Or even Lynn? Maybe they’re doing what the HC wants done? Minimize turnovers. Punt and play field position for the next set of downs?

Naw it can’t be on Campbell he’s awesome. He has this team right where he wants it…… he just needs his guys…. It’s all on the players… that’s obvious sarcasm by me but that’s what many fans are saying. They said the same thing with MP too.

I’m shocked at how many posters are defending the HC right now. See the thread below.

Now We Know Why Dan Campbell Hasn’t Been A Coordinator

@QBHATER90 Your one of my favorite posters but I feel your missing what I’m saying. What your doing is making excuses for a winless season. There’s just no excuse to be winless. None. Your saying it’s ok because expectations are low. I’m saying that just because expectations are low it doesn’t excuse mistakes by the HC, GM and staff in general. DC has made a ton of mistakes. Even you admit this.::: see below. But I disagree in the improving dept. We are a winless team and can’t seem to clos…

A lot of the blame falls on the HC.

They’ve put up some extremely long drives and run time off the clock. All with Goff at the helm and Lynn as OC.

I think I get what your putting down. Lynn appears to be the scape goat but he’s been a respected coach in the league for some time. Herbert excelled under him just last year. So what’s different?

Some blame the QB but when Boyle came in we had the same problems. In fact they got worse.

Campbell admitted in his press conference that he wanted to play conservative football. He thinks that’s what’s best.

This conservative offense is all on DC. It’s what he wants.

Hes had no time in the pocket and when it’s collapsing from left right and front, it’s pretty hard to convert those 3rd and longs.

Hopefully with Decker back this starts to change.

Yes, the pass blocking without Decker has been terrible.

The Athletic had a breakdown last week or so about the best and worst o-lines. Nelson was one of the worst pass blocking tackles and Sewell wasn’t too far behind. J “Yo Mama” Jackson was also terrible.

Those 3 guys have given up more pressures than the Rams entire o-line this year.

It’d be nice to see the Lions show some promise with Decker back & Sewell showing some improvement.

All I can say is Goff has a rating of 116.9 on 3rd & 4-6 .That’s slightly better than BM on a similar number of throws. Don’t give a flying fart if that’s achieved through the air or by YAC. You want style points to count, go watch Project Runway or figure skating.

Btw, who clumps plays for 3rd/5 up to 3rd/10 ? Nerd economists who live in Mom’s basement, that’s who, Brad…lol. Insanely wide range of situations in a game that is all about very specific situations.

Brad does a nice graphic in a USAToday-pie-chart-for-the-mentally-deficient and/or-lazy-kinda way. That’s about it, imo.

The truth vs truthiness: 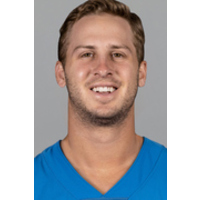 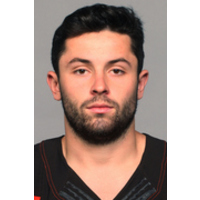 I have few problems with folks who want to defend the current regime. Lord knows I’ll argue over the Caldwell era, so I’m no better.

I don’t even have a problem (too much) with the winless season. They allocated the resources they had. Hoped to find something from some places that didn’t materialize. It happens. This year was always going to be ugly to me, just didn’t think this ugly. But this can’t extend beyond this season.

If they want to defend, go ahead. Just don’t expect me or some others to gleefully go along. Expect some of the warts to be pointed out.

Would be curious to see what Goffs numbers have been in the past. I think Goff May have a good game against the Bears.

That’s just a sad stat, but anyone watching already knew that. And if Dan’s idea is to run a conservative offense he needs to go, that shit will not work in today’s NFL, I understand why he might be that way this year ,but if that his philosophy then he never reach even Patricia good.

One of the dumbest things I’ve seen is taking on Jared Goff with his contract, how can anyone want to pay him 24 million a year for his play, Rams sure didn’t they gave up a first rd pic to get rid of his contract Holmes thought he out smarted them. But Snead and McVay are sitting back laughing there ass off. Goffs play is more of a vet min then 24 million a year. Holmes got dupped.

They allocated the resources they had. Hoped to find something from some places that didn’t materialize. It happens. This year was always going to be ugly to me, just didn’t think this ugly. But this can’t extend beyond this season.

This plus injuries. No doubt, ugly. Like you said, there needs to be massive improvement next year.

The Lions will be adding two more good, cheapish prospects the next two years with the picks they got from trading Stafford.

The Rams, meanwhile, are close to the same position they were in last year with Goff as they sit in 2nd place with a two game losing streak and some tough remaining games.

If the Rams are laughing, I want some of want they are smoking

That cause your a cal guy trying to turn it into Goff vs Stafford. And while your laughing about them 2’first remember with Goff bombing out so badly you now have to use one of them pics on a QB and the pic you get from the Rams won’t be high enough to even get that QB so your not a head, plus now you have his hudge contract you have to dispose of. In the end you really only got one 1st and the 3rd.