Jeremiah on Sewell and Slater 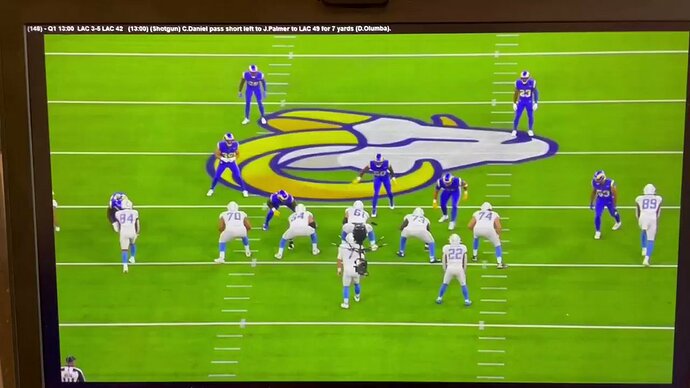 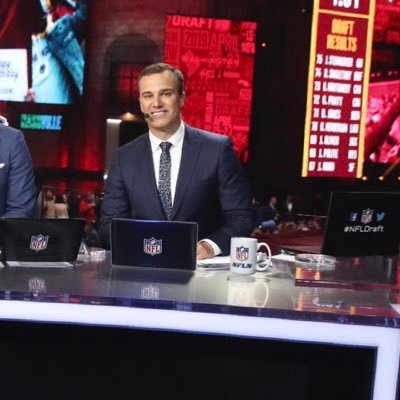 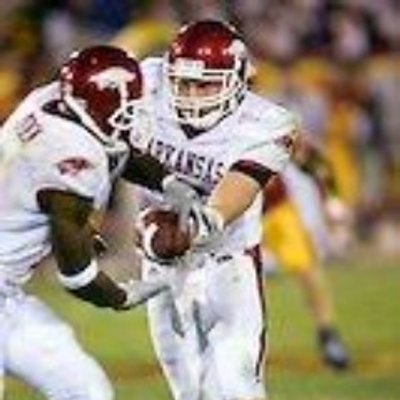 @MoveTheSticks Are you surprised? 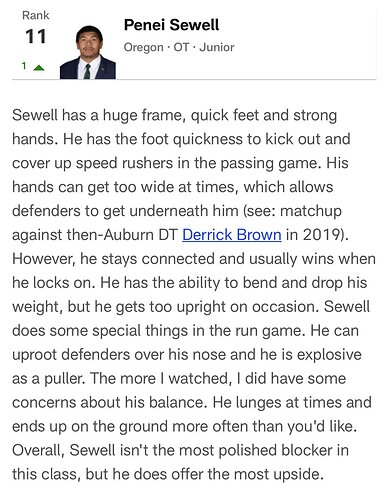 We should have drafted Slater!!!

OMG I think I will go jump off a bridge now.

Sewell will be fine.

All Jerimiah is doing is trying to confirm his own pre-draft observation. Jesus its amazing how starved we are for football. Preseason is basically practice. The Lions had no concerns about winning the game against the Steelers. And lets not forget he’s moved positions and the Lions were sitting Decker and Ragnow.

Jeremiah is also the Chargers color guy. He’s of course going to be bullish on Slater (who is also going to be really, really good. Both are going to be terrific O-Lineman.

So was it smart to draft a guy top 10 and move him to a different position?

I still think it could all work out, but you know, I’ve been a Lions fan until I’ve gotten gray hairs. I know how this usually plays out. We get a bunch of fans making excuses for what we’ve done, then when opposite information comes to light we poo-poo it until we have to face reality. Been there; done that. I will be critical until the Lions brass proves they know what they are doing for once. I’ve seen one GM in the last 20 years that actually got us to somewhat, occasionally competitive and he’s is the GM with Washington now (and I am very curious to see how it plays out - it looks like he had a good draft).

Sewell is young, he’s changed positions. No arguing that. But this is where were at right now. No way around it.

Here is a good cut up of some of Sewell’s plays from last night. While I don’t necessarily agree with everything the author says, I appreciate the edit and focus on Sewell Note, author doesn’t think he is bad, just adjusting to the NFL. He says that hand placement in pass blocking is the biggest shortcoming of Sewell at this point.

I don’t get why I’m supposed to be overwhelmed by the two Slater clips. Nice feet on the first (definitely impressive agility) but it’s a three step drop out of shotgun. In the second one Jaimes (who was a steal) does the heavy lifting.

Sewell is learning a new position and that was his 2nd game in two years.

If I haven’t seen major improvement by game 17, I’ll start to get concerned. But it will take time.

And only played 11 of those snaps with any starters in the OL. And Tim Boyle is simply putrid.

Slater is gonna make mistakes and get beat, so is Sewell. They’ll be compared their whole careers. They’re both gonna be really really good

I’ve seen one GM in the last 20 years that actually got us to somewhat, occasionally competitive and he’s is the GM with Washington now (

… and he has the second worst record of all time as GM. Of course, the only chump worse than him is the one he was the right hand man for.

Next time somebody links this guy, please dub it for me. 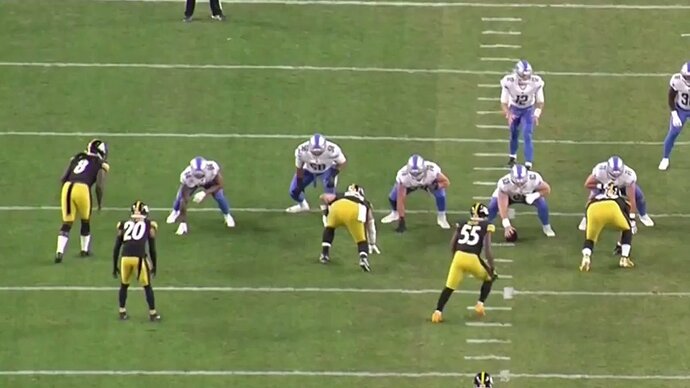 What's with the lack of depth on Sewell's pass sets?! @geoffschwartz @BigDuke50 ...I like this example because his foot is right on the yard line for visual reference Also turning to sideline often - I thought Melvin Ingram worked him inside/outside https://t.co/DRziHJroaM 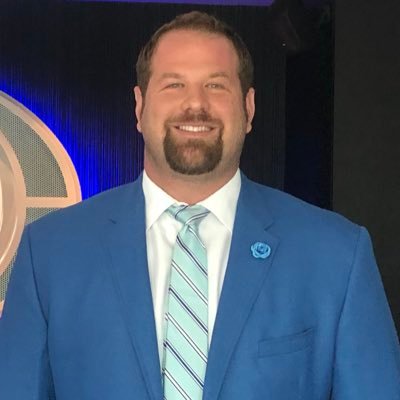 @BenFennell_NFL @BigDuke50 Lost might be too strong of a word. But he’s lacking confidence. And when you lack confidence and then start a game slow, it just snowballs from there. And when you don’t have a tool box of fixes because he’s new at RT, you get into panic mode.

Best line of the week. #Packers OT Billy Turner asked what's it like switching from right tackle to left tackle in the middle of a game? "It's like something I heard Packers legend Josh Sitton say a few years ago in Miami - it's like wiping your ass with the opposite hand." pic.twitter.com/aReIXZ9gm7
CuriousHusker August 22, 2021, 7:53pm #15

I just watched all 21 plays of his again in slow motion. I did so prior to watching the above video. I do agree with some of his observations though

1:) hand placement is clearly an issue for him right now. He has mentioned as much to the media. 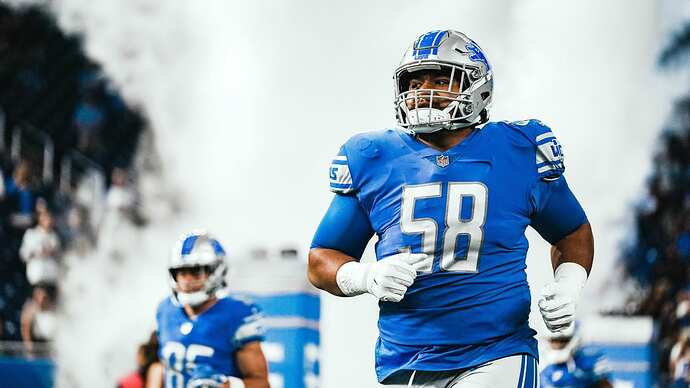 Rookie tackle Penei Sewell talked to the media about his NFL debut last week and what he wants to work on moving forward.

2:) Ingram seemed to have him really flummoxed with the two way go. I don’t know if Ingram is doing something with his feet or hips or whatever but it seems to me that he is setting up Sewell in some way. On the first Ingram speed rush he seems to be expecting a bull rush/counter move. The next time he’s beat with the rip move as he overcompensates and kicks out too wide. Then later on the throw to Cephus (IIRC) against cover 2, he doesn’t really kick slide much at all. I agree with the guy on the video. That was the most perplexing rep. Was he expecting a bull rush or something

3:) he does make adjustments though. Out of the 5 or so reps all but one were in the first 7 or 8 plays. He did get better as the half went along (sans that one terrible rep)

So while it was definitely not an inspiring performance I don’t see anything overly worrisome. Is he ready to handle Nick Bosa or Khalil Mack right now? Nope. But I think he’s still going to be an impactful player for us this year.

Honestly hard for anyone on offense to look good in the first half. Everything about that game was ugly. With the way we’re playing preseason it really does look like we’re in a rebuild and trying to see who we have on the roster. Unfortunately I think this teams needs its starters to play more so they can get prepared for the regular season.

Some of us here thought Slater might be the better tackle. But everyone thought Sewell has more upside

I was firmly on the trade down and take Slater train. I wanted the extra 2nd rounder that could have been T Marshall- also a guy I begged for along with E Moore and Nick Bolton.

We’d sure feel better about WR or LB, while feeling almost as good about RT

I wanted Parsons … didn’t really look into Sewell much, because it seemed like he was going to Cincy.

I wanted Parsons … didn’t really look into Sewell much, because it seemed like he was going to Cincy.

A couple of us here were in the Parsons camp. Although I was happy about the Sewell pick, Parsons was my favorite player in the draft. And made more sense on a lot of ways to get a leader on a terrible defense than a LT to start out of position when we already have a top ten LT

As far as the two tackles, I started a thread asking if I was crazy that I wanted Slater over Sewell. Consensus was that I am crazy. Which I fully embrace