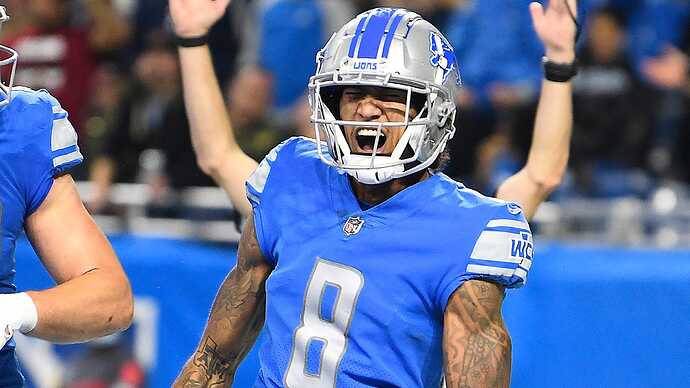 The Lions agreed to a two-year deal with wide receiver Josh Reynolds in deal reportedly worth up to $12 million with its incentives.

I am interested to see what “up to 12M” means. I would love this if were 6M guaranteed with escalators for performance that capped it at 12M… He’s a big, fast enough, younger guy who Goff has chemistry with. So I have zero issues with him as our #3 option and Cephus as our #4, and Brown as our #2 so long as we get some depth at TE and at least 1 game changer.

I want St Brown as our 3. Reynolds as 4. Cepheus as 5. And 6 being a Khalif Raymond type special teams guy.

I think expecting Brown to be a #3 is a bit optimistic? I mean it could happen, but I think given we have a solid receiving TE, and RB, and what Brown accomplished as a rookie, I would say we have 3 of our top 4 receiving targets already in the fold. Having Cephus back and Reynolds as insurance is awesome. Don’t get me wrong, I would love to see us sign JuJu and draft a guy like C Watson to round it out. Im just glad to see us land a culture fit and at least raise the floor or the WR room a bit.

I like the signing but 6 mil a year is more than I thought he would get. So I’m assuming this is an incentive laden deal?

Which I am very much ok with. I wonder what his base pay is?

Curious to see the contract breakdown of this one.

Curious though, he only signed a 1yr $1.75M deal last year and didn’t put up great numbers.

That seems like a ton of money for a number 3 or 4 wr.

The escalators are probably inline with WR1 or 2 (at worst). If he performs to get it all, them no issue for me. He literally has to earn it.

That seems like a ton of money for a number 3 or 4 wr.

It is right in line with guys like Keelan Cole and Kendrick Bourne… and they signed last year when the cap took that dip that hurt lower level free agents.

I also would guess the incentives might be harder to reach after they draft at least 1 WR.

Every year the cap goes up… and so do new contracts. Every year people are shocked at how much free agents get paid. I bet this falls right in line with other second contract #3-4 wr with starting experience signed this year.

I am glad that the Lions are giving him another contract. I am also glad that it does not sound like a big one. I agree with Deadstroke on what the contract might look like. It will be interesting now to see if the Lions go for #1 in FA or one in the draft.

Curious though, he only signed a 1yr $1.75M deal last year and didn’t put up great numbers.

I was expecting him to get somewhere between 3&4 mil a year which nearly doubles what he got last year.

But 6 mil a year is a heck of a jump. The cap didn’t go up that much. So I’m assuming this is an incentive laden deal.

Really makes me wonder what Walker and Harris will get.

Seems like alot for a guy that got cut mid season.

Same people who question this want to pay really big for few who did less than that last season an who are 3 or 4 years older.

If like Dead’s idea its easy to get out of next season. Or we can pay 16 to 18 million per year for few FA posters have got all excited about. Who had poor years or worse one being a X Lion who sign a major 16 plus deal last year ,how did that work out for Giants.

I like deal an bet will be cheap out if he doesn’t do what they hope he will.

Witch one of them top guys were worse the Reynolds ? The guy was cut mid season. He look ok here because he only had to compete with St. Brown a rookie and couldn’t out prefrom him either when there really wasn’t any other option s to throw too

As others have said, I’m sure it’s incentive laden. It’s why we’re not hearing any details right now.

Regardless I’m sure it’s more money than I expected, however that seems to be the case in general. The FA market is barren this offseason.

Says the guy who loved the Trey Flower’s and justin Coleman signings. Its over priced deal for a number 3 wr.

Seems like alot for a guy that got cut mid season.

He didn’t get cut because he wasn’t worthy of staying on the roster.

He asked for his release because he wasn’t getting as many snaps as he had hoped for when he signed with them… because they traded for Julio Jones after he signed his deal.

$3mm/year + performance incentives seems an ok deal to me. He’s hot and cold but sure added a lot when he joined and has proven experience with Goff. He can do most of the route trees so he’s a good #2 at just about any spot in case of injuries.

I still think they draft 2 WRs hoping that one is a solid contributor and one more developmental. May still look for another FA as things change through the off-season.

IF the lions are showing to be contenders, maybe they trade a future pick by week 8 for an elite proven WR with time left on the contract.

The two Reynolds signing threads should probably be merged, but as I said in the other one:

You don’t like it find your opinion I like signing name a couple for that price you think are better. * REC 29 YDS396 AVG13.7 TDS2

Name you FA WR I like this Reynolds signing an his numbers with Lions show it. I showed you another I like if the signed others some have name I think are not worth the cost.

You complained last season we never had any WR now we have another that did ok after getting here an you complain we have 3 i like so far heading into season. Last year we just a Cephus