Anyone hear if that ball was lost in the sun, or he quit route?

That was a TD.

Maybe he thought he heard a whistle?

I don’t think he ever saw the ball.

Really bad look on that one. Everyone makes mistakes, but if he finishes that route and looks for the ball it was a likely TD.

And somehow they won!

They don’t have Aaron Glenn at DC, so you can win without having to score 38 points.

They had the roof open. He lost it in the sun.

They don’t have Aaron Glenn at DC, so you can win without having to score 38 points.

Ok, come on. You don’t really believe that.
Glenn is a good coach.
The Dline interior has Alim. Name another who would start on another team.
LB, Anzalone and Rodrigo. That’s it. Rodrigo is a rookie, and Anzalone plays like one.
Now, look at IR.

They had the roof open. He lost it in the sun.

Your guess or did Reynolds say this?

Check out Jamo after the play: 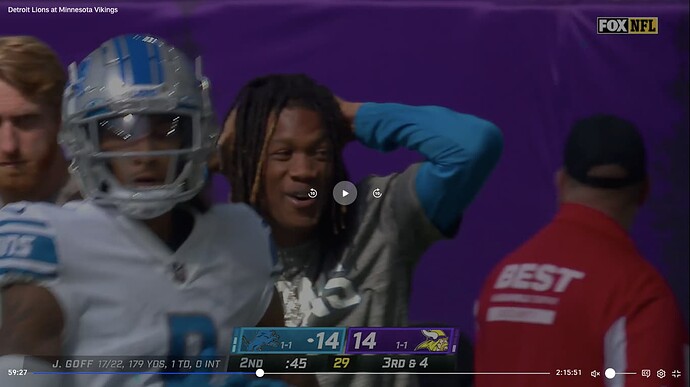 NEVER would have happened to Jamo! 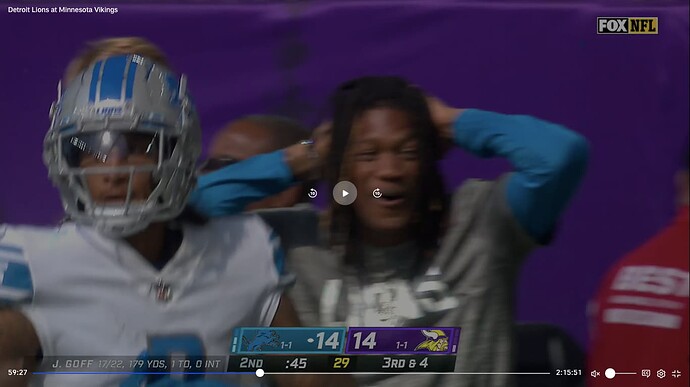 Your guess or did Reynolds say this?

The announcers said it, but, that’s exactly what it looked like happened.

Josh has the Vikings defense on his fantasy team. Its the only reasonable explanation.

That makes sense but why just stop running? If he just finishes his route there’s a chance that pass just drops in his hands

Glenn is a good coach.
The Dline interior has Alim. Name another who would start on another team.

Kinda crazy because alim would probably be the best lineman in Caldwell’s defense and people still to this day act like we should have won the Super Bowl with that roster.

So what makes Aaron Glenn a good coach? The fact he has the 32nd ranked defense in scoring?
If the defense was ranked in the 20’s then sure he is a good coach making good with what he has. But the fact is this defense is giving up scores at a rate of 31/game, last year it was only 27.5 per game. So tell me what is it that he has done so special?

We could have really used that TD.

I did read that MCDC said that Josh just lost sight of the ball. I agree with others in this thread that he should have just kept running - that ball was right on target!