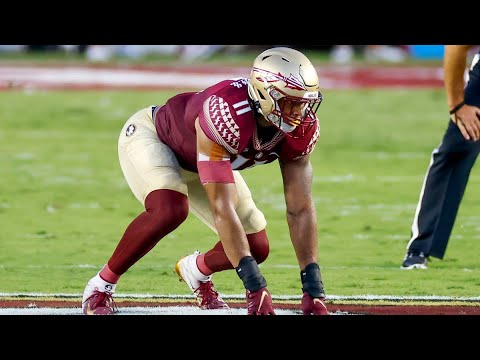 These are highlights that represent the high end of what each player can do, right? Both look promising of course. However…

I know this is blasphemy but I think I’d take Johnson over Thibodeaux. Obviously we have combine to see how each tests etc. On the field though - the thing that strikes me watching both is that they are both listed at 265 but Johnson appears much more stout. One could argue too that Johnson went up against tougher competition. One drawback I did notice was that Johnson was often lined up against the right and not left tackle. 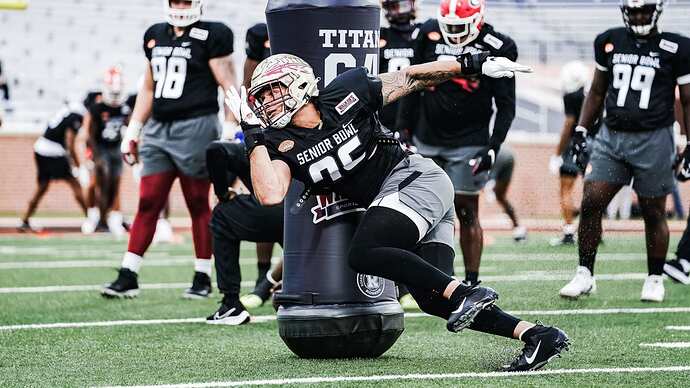 I think Jermaine is going to be the best DE in the class.

I love Johnson, I’ve been hyping him up as a top ten pick and my #3 edge for awhile now. That said, I’d still take Thibs over him. Johnson’s just not as good an athlete. He’s explosive and great going forward but he lacks flexibility, which is pretty important for an edge getting the corner (Hutch has some of these same concerns). Now he overcomes it with strength, length and motor and that can work, but it will be far more difficult in the NFL.

The more I watch and read on KT, the more I think I thought he was something he wasn’t. Which is a bendy/flexible type EDGE. His first step is great, but I don’t see the flexibility.

Looking forward to the combine more than normal this year though.

All Combine and Draft-Related Analysis, News, Video, and Biographical Information for Kayvon Thibodeaux

I agree that Thibs’ flexibility isn’t on the level of say a Garrett or Chase Young, but it’s OK. Much better than Hutch or Johnson. The Bosa bros aren’t crazy flexible/bendy either, but they’re good enough.

But he combines elite burst with above average lateral agility to win the corner anyway, and with strength that belies his frame, wreaks havoc. Like Zierlein said in that scouting report, he’s gonna live in the backfield.

Detroit has a number of Nigerian born players and Ojabo could be the next on the list if Aiden goes #1 and Detroit trades down. I think he’s more of a push rushing specialist at this point but I expect him to grow into a full time 3 down player in the future.

I don’t expect him to get drafted before KT but he’d be higher on my list than KT.

I think its an interesting question for the Lions because the Lions have some choices to make at 2 if Hutch is taken by the Jags. Even if you like Kayvon better, a trade down could net us Johnson plus a pick (or two).

Johnson has a really interesting backstory as one of the players in Last Chance U on Netflix who took the hard road to D1 at Community College then transferred to UGA then to Florida St.

I also like Johnson and he’s the biggest reason I’d be ok with passing on KT and trading down if the option presented itself.

However if Hutch is there I’d take him.

If Hutch is gone and no trade presents itself than I’d take KT. 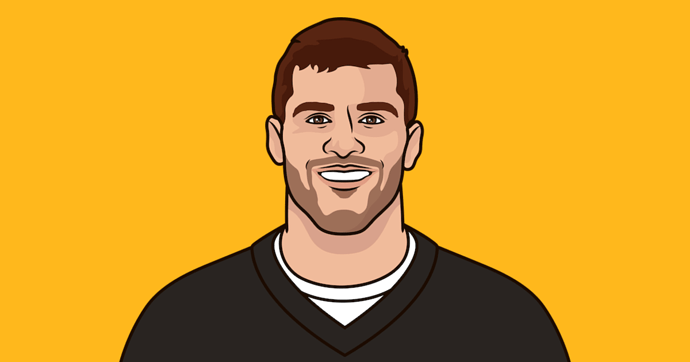 Most sacks over last 5 seasons…

So you have 5 edge guys in 3-4 systems in Watt, Chandler Jones, Barrett, Quinn and Judon

You have 3 interior DL guys in Donald, Chris Jones and Heyward.

You have 5 hand in the dirt DEs in C Jordan, Bosa, Garrett, Mack and Yannick

Ironically 6 of the 13 aren’t on their original teams!

More eye popping is that 15 of the top 25 (see link) are not with their original team!!!

By comparison - 15 of the top 25 receiving yards leaders from 2017 to now ARE on their original teams. Of the 10 that aren’t- D Hop, Cooks, Julio, Cooper and Diggs not only produced really well for their drafting teams, but also brought back a bunch of draft capital to their original teams when they were traded.

So edge rushers have a high bust rate, inconsistent sack production from year to year, and tend to either get record contracts or leave via free agency within 4-5 years of being drafted.

So the historical success of taking a rush guy top 1-3 and A) winning consistently B) him be a key piece, and C) keeping him long term…. IS VERY CLOSE TO ZERO!!!

3 hall of famers… for sure
3 other borderline guys
3 too young to Telekom, but great starts

There are 10 who never had one decent season between them…

And the last 8 are guys like Watkins, M Williams, R Williams, Cooper, Crabtree and Braylon who had some success but mother like what was expected

Again this is why we trade down. No matter what, regardless of how shitty of a deal we get…

We could do the same drill at DE…. 15 of the last 33 edge rushers be it 3-4 or 4-3 have been solid picks. I was liberal in counting guys like Ziggy in the successful 15…. You could argue he wasn’t the ideal ROI on a top 5 pick, but compared to the rest?

The more I watch and read on KT, the more I think I thought he was something he wasn’t. Which is a bendy/flexible type EDGE. His first step is great, but I don’t see the flexibility.

I’ve been mentioning this. Guys get it done different ways. Watch Josh Allen from Jax. He looks like KT looks. Sort of Ziggy Ansah like. Really heavy hands with some good straight line instincts to get through cracks in the line. KT and those guys play really strong, and with great leverage and explosion. They are all athletic, but… Then there are the what I call Gumbys. That have elite flexibility and explosion. I go back to Robert Quinn coming out of NC, he’s old as dirt now, and I haven’t watched much. Still getting it done I think, but I don’t know if he still has what he used to in that way. Brian Burns was really bendy and he’s done well. I really wanted to trade down for him that year. But we went Hock instead.

Anyway I like the bend / explosion I see with Johnson. I do think he’ll go after KT, but if we trade down, he’d definitely be a guy I’d be interested in. Another guy is the Ebiketie kid out of Penn State. Ojabo has a little of that ability to really come back into the pocket quickly. You aren’t really getting that from Hutch or KT at an elite level. But there are more than one way to skin a cat and it’s those other traits and that they still get to the QB that will make Hutch / KT 1-2 one way or the other.

I would rather have Johnson and someone’s 2nd or 3rd round pick than Tibbydough any day.

Another point worth mentioning is that all three of these players (Hutch, KT, JJ) do a nice job of setting a run edge.

But being bendy isn’t a requirement for succeeding on the edge. In fact I’d put it pretty far down the list, especially with the way QBs step up in the pocket nowadays.

The Bosa bros don’t have great bend. Trey Hendricksen has virtually no bend, same for Cam Jordan, Arik Armstead. TJ Watt’s is average, same with Za’Darius Smith, Matt Judon, Shaq Barrett, Arik Armstead. All of them win other ways than with bend.

On the flip side Harold Landry’s as bendy as anyone in the league and before this year (a contract year) had been meh. He’s still a liability versus the run. Vic Beasley, Dante Fowler, Shane Ray, Barkevious Mingo, all bendy guys who disappointed pretty heavily. Dee Ford’s been decent, so has Bruce Irvin.

Bend without strength doesn’t really work. Those guys tend to be 3rd down, designated pass rushers their whole career. Von Miller, Myles Garrett, prime Khalil Mack, those guys are strong as well as bendy. Burns is too. He doesn’t look like he’d be, but he is.

I would rather have Johnson

Some really great information in this thread guys. Thank you.

Hutch is different in that he played 4 college seasons. That matters to me in that he has played a LOT more snaps overall. Hutch’s sack numbers SUCK overall BUT MI only played 2 games in 2020. Hutch played 14 games in 2021 and he had sacks in 9 of those games. 9/14 is a 64% sack rate. Solid. Hutch had HUGE days versus two of the best teams they faced in Penn State and OSU. I like that. Aidan didn’t really play as a freshman and he had a respectable 4.5 sacks in 2019 and he lost his 2020.

All things considered I take Hutch first (agreeing with Air). But after that JJ and Thibs are tied for me.

It’s a trait. I probably got too wordy before, but I’m putting both Hutch and KT above the more bendy guys. More than one way to skin a cat.

I want Hutch bad, his drive, work ethic, and leadership would be a perfect fit, and continue the culture shift MC/DC is trying to build.

His strength and athleticism will surprise some. He has a very high floor, and I see a lot of JJ Watt in him. I think his ceiling is high as well. I think some sell it short because he’s not as bendy as Quinn, but like you’ve pointed out, his hand usage is already terrific, he never stops, he also has good ankle flex, and power, and knows how to set people up and counter. I think he’s the best player in the draft. He should go 1 OA, just hoping the Jags do the smart thing and decide to protect their franchise QB

His strength and athleticism will surprise some. He has a very high floor, and I see a lot of JJ Watt in him

You know who he reminds me of…… Jared Allen.