Be cool if the Bears did this but went OT instead of Carter. Their o-line is a disaster and tackle is a premium position. They have a lot of money to spend. Much easier to get DT help in FA. Then we can take Carter

Is it really? Or is Fields just a WR playing QB?

Wut? The Chicago Bears Apparently Have a Top-10 Offensive Line

It's a surprise, to be sure. But the Bears ranking as a top 10 offensive line is a welcome one!

Not buying what they are selling. I have family that are avid Bears fans. Ask them if they have a top 10 offensive line. Fields just hides a lot of the bad. Even with his athleticism he was sacked the most:

Justin Fields has been sacked the most by a quarterback this season, with 55 sacks.

So to answer to your question - Yes, I think they need offensive line help and it should be a top priority for them. They may feel differently. We can only hope This is my sleeper DT in the draft

His motor is the biggest red flag for me. Especially when his own teammates are telling him how good he can be if he played hard all the time.

Here is a simulated mock that I did using PFF. What do you folks think of this first round. 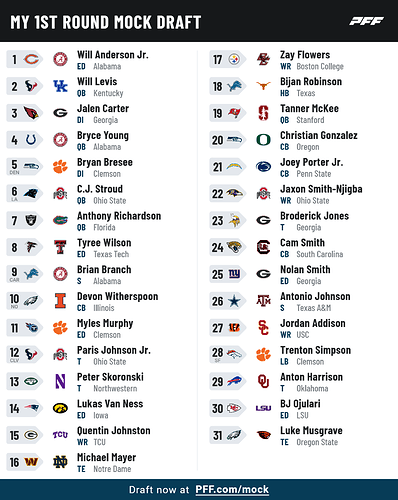 I wouldn’t hate it. Everyone knows I’m not a RB in the 1st guy so I won’t belabor that one, definitely would have taken Gonzalez there (I also don’t think he falls that far).

Branch is tricky to figure out. On the one hand he’s sort of a 1 of 1 player (though Sydney Brown is giving me pause, that guy is great too) which makes him more valuable due to scarcity. On the other hand we always overrate the lower value positions. If the guy doesn’t test/measure like a badass, they usually doesn’t go anywhere near as high as we project (Nakobe Dean, Moehrig, Linderbaum, Owusu-Koromoah, Delpit, etc…).

For as good as Branch is, I don’t think anyone expects him to test like a freak. If he’s lucky he’ll hit Pitre’s numbers from last year, and he didn’t go until the 2nd. Most mocks have Branch going to us or the Jets or the Packers, but I could see him falling to the latter part of the 1st round for sure.

I get what you are saying, though I will say that both Branch and Robison were at the top of the board when the picks came up. Since they fill holes I just took them. Though I did have to decide between Branch and Witherspoon, would love to see Holmes have to make that choice.

Yeah and I should have made that clear, my beef with Branch would be how highly they have him rated since low value positions don’t tend to go that high unless they test like crazy. If you hadn’t picked him for us he was coming off the board really soon anyway, and I’m just not sure it happens that way.

Branch is tricky to figure out.

I’m glad I’m not the only one not in love with him, although he’s the best positional fit for us.
From what I’ve seen, as far as DB’s go, I rank them as:
Gonzalez, Witherspoon, Smith tier 1
Branch, Phillips (I know he’s small, but…), Porter tier 2
But I’ve only watched highlights, not full games, so it probably means little.

Oh I really like Branch, it’s just I think he’s gonna go much later than he’s being mocked. And do I like him that much more than Sydney Brown, who plays roughly the same position? Not really, but then I love Sydney Brown.

would Branch be your first DB off the board (S and CB)? At 6 with no TD?

No. I’d take Gonzalez and Witherspoon over him, and I’d take other positions before I drafted him at 6. I’m not sure I would even draft him at 18, not now that there’s more palatable options later. It would depend how the board fell. I do have him ranked that high overall though, it’s just the positional value that makes me think he could be had later.

Gonna have to do some Sydney Brown research now.

He’ll be at the Senior Bowl next week, good chance to take a look at him.