I know the Lions attended the South Dakota state pro day but I haven’t heard who they sent. Anyone know?

I’m curious who we were there to see. Who do you think we were scouting?

The biggest name was RB - Pierre Strong. He ran a 4.37 at the combine and NFL teams are drooling over his speed.

He’s probably a mid round pick and I have to think we view him as a KR/PR/Gadget player type. He’s kinda small and isn’t really that elusive. But he gets up field fast. He’s built perfectly to be a return guy and a role player type.

I do think the Lions are looking at potential gadget player / return guys in this draft. Rumor is we’ve shown serious interest in WR Wan’Dale Robinson.

Another possibility is we were interested in CB Don Gardner. He’s coming off injury and could be a steal in the later rounds.

Or maybe S Micheal Griffin. He’s the size teams cover at Safety. His vertical jump was so high that he exceeded the measuring device so they had to extend it and have him jump again. His vertical was a whopping 43.5 inches which would be one of the best in NFL history.

Or maybe they just wanted to visit Zach Zenner who was in attendance at his new job as a players agent. 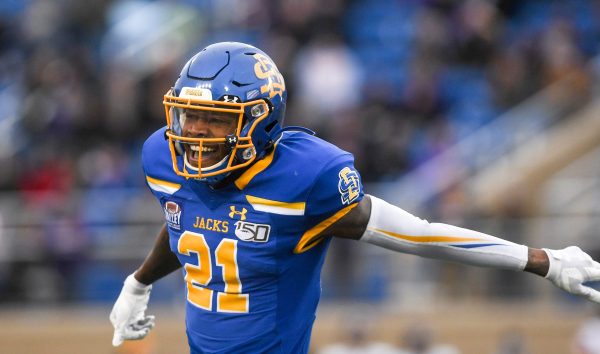 The Detroit Lions checked out a draft sleeper RB and a pair of very athletic DBs at South Dakota State pro day, with former Lions RB Zach Zenner in the house too

I thought Zenner was going to be a doctor?

In my initial mock in January I had us taking Strong and fellow Missouri Valley Conference player Isaiah Weston, (Northern Iowa), in the 6th. I was surprised that both of them were invited to the combine but they didn’t disappoint. Strong caught 63 passes out of the backfield at SDSU, for me his chance here would be a 3rd down back and depth. Think a bigger version of Theo Riddick with more speed.

I thought Zenner was going to be a doctor?

My daughter went to school to be a nurse. They have so many nurses, they wouldn’t let her do clinicals without the jab(s).
Maybe Zack is in the same boat?

Maybe they require more burst to be a doctor

Maybe they require more burst to be a docto

I think we’ve at least had someone attend every pro day, right? Sometimes it’s just a scout/personnel guy, sometimes it’s a coach like Staley or Sheppard, but pretty sure we’ve been at essentially all of them.