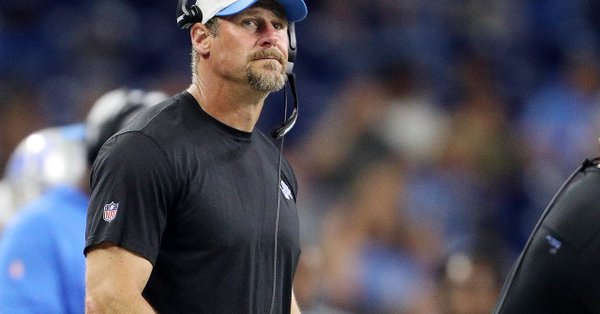 There's talent in some pockets of this roster, but there's just too many holes and not enough depth for the Lions to compete this season. I've got them with ... 3 wins: https://t.co/ya8jSUKowU

My prediction Is Wes is going to reply right…now

I’ve said it previously. A 3 win year is a dumpster fire of a year. For Campbell it would take a string of injuries including losing Goff and possibly Blough on top of it. Patricia couldn’t win with anyone but Stafford (and barely won with Staff) but I think Campbell can win with his backup QB.

If the Lions win only 3 games (and Goff is healthy for 14-17 those games), then I think we have a conundrum on our hands fully believing in this staff going into year two. It would be a rough way to start the new regime.

That said, I think this staff finds a way to pull the ship out of the almost-certain rough start at 1-5 or so (considering the schedule). I do expect them to beat the Bears once if not twice. The Bengals, the Falcons, and one or two other teams (Eagles? Broncos? Cards? Vikes?)

In my mind 5-12 or better is an achievement and something the organization can build on year two. 3-14 would have to be considered a disappointment and make things pretty tough to dig out from underneath in 2022.

I think 5 wins is their ceiling. With or without Goff. I look forward to being wrong.

As I stated in another post his guess is fine, but the fact is that none of us know how any of these teams will look when they meet. So with that said, I think 3 wins these season would be demoralizing for the team and us fans. In addition I would add I believe the Lions will look alot better then some of the media is willing to believe. I base this completely on how bad the coaching and schemes were the last few seasons.( hello rushing 3 on 3rd and long)

So true. The Lions aren’t deep enough to endure significant injuries, especially on the O line. Maybe Stenberg could replace Vaitai, but Goff isn’t eager to find out.

Changing head coaches is worth 3-5 wins in my opinion. It was obvious from game 1 that teams under MP would underperform. With Caldwell teams tended to overperform slightly and that was with a dumpster fire of a staff in many places. DC has a superstar staff. I expect the team to overperform talent level. While that may not translate into early wins as the year goes on I think it will. A 3 win season would be a disaster. IF this team only wins 3 games then DC and staff are simply not what many here think he is. Personally I think this team has more talent than given credit for. It is young and unproven and many of the younger guys were learning under MP. We will see but I think 5-6 wins is the floor for these guys.

I think 3-14 is possible. They’ve downgraded fairly significantly at QB, their receiver group is likely the worst in the NFL so the lesser QB will have fewer weapons to work with, I’ll believe that they can run the ball when I see it, Swift is still very unproven, Williams is a #2 RB at best, the offensive line is still relatively unproven as well. The defensive line should be improved but that’s also depending on a lot of youth, the pass rush should be improved but the LBs are one of the worst units in the league and the secondary is full of young guys so it might not matter much that they put more pressure on the QB if they can’t cover.

On paper, this is one of the worst Lions rosters I’ve seen in my lifetime and there’s a lot of shit rosters to choose from but part of that is all the unproven players they’ll have as starters so there’s plenty of room for growth and a coaching staff that seems capable of molding that youth into better players.
As I’ve said previously, this team will almost certainly lose a lot of games but what we want to see is a team that develops an identity of being tough to play against and a team that grows throughout the year and is better to end the year than they were to start.

They’ll have an opportunity to really upgrade the talent level next offseason with a lot of high draft picks and a lot more cap space to work with but for now, lay that foundation so that there’s something to build off of next season because right now, it’s a bare cupboard.

He’s not out of line considering what they were left with. Can’t remember who said it, but was pretty much spot on with “Its not a rebuild, a rebuild is that you have something to build on, which is absent here”. Hence why I laid a futures bet on the under 5 1/2 wins.

I think 3 wins is overly optimistic.

If this team only wins 3 games then there is no buy in to the new regime and literally no fight in this team. It would be time to consider cleaning house. That said I think 6 or 7 is more likely. I would hope they would at least be competitive in the rest. This team still needs a talent upgrade, but I expect them to have more fight in them than a 3 win team.

They should be able to handle 5 wins. Hopefully not winning the last two, when the other teams are tanking for draft.

I’m okay with 5, as long as we are competitive, and the defense is causing some real issues for the other team. I don’t know a lot about Anthony Lynn, but I’m not that optimistic about the offense as a whole. I think Goff may have the fewest legit weapons of anyone in the league. Not good.

Not all losses are created equal when you are trying to create some confidence and swag going into next year. As long as we are within 7-10 points, and fighting, there is something to build on.

Talent wise I got the Lions as a 2 win team.

Talent wise I got the Lions as a 2 win team.

Are you kidding me?! This WR room is going to take the world by storm. Anthony Lynn dude.

I don’t see how you could blame this staff for a bad season with the roster they were left with.

This isn’t a Caldwell—>Patricia situation where you’ve got a solid roster and then the wheels fall off under a new regime.

What big-name playmaker exists on this team on either side of the ball at this point? It’s a mess because of Quinn. Blaming Campbell would be asinine. He got stuck with a roster that needs three offseasons to fix.

Hate to say it but i see 5 tops as well id love to be wrong.