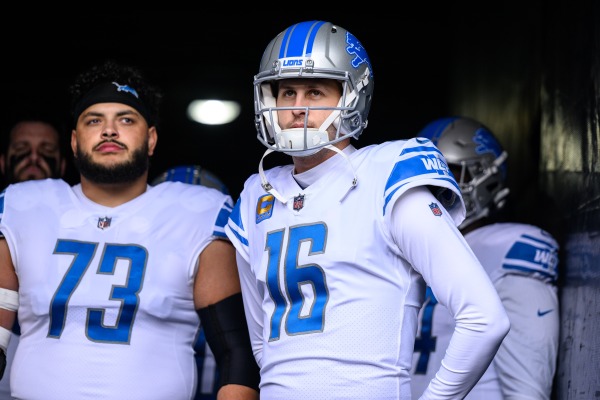 I agree with the MVP guy. Goff is the least of the problems with this team and one of the main reasons they have won or been in nearly every game this year. Goff IMO is much better then people think since McVay labeled him the reason they couldn’t win that super bowl or the reason the next 2 seasoned sucked. McVay layed his piss poor coaching and drafting on him and now everyone without a brain thinks Goff sucks. Stigma is a funny thing.

There’s context to “The MVP guy” opinion. He said that Goff would be in the MVP convo if he “only played games at Ford Field”.

All those opinions illustrate is what we already know, that Goff is a very divisive figure which generally means that taking a middle ground is likely the most accurate take basically meaning that he’s fine but certainly replaceable if a better option comes along.

My opinion on Goff is that he’s had a pretty good year overall but he struggles to make that key throw in key moments, it’s happened several times this season, and it’s what separates the merely average to above average from the top tier.
Are we ok with simply a bit above average? It might be good enough to compete for a championship eventually but it lowers your room for error.

It might be good enough to compete for a championship eventually but it lowers your room for error.

Yup.
I predicted Goff would do very well here, and he has.
I predicted that he’d do well enough to create massive controversy…he has.
I DO think getting him his Gurley man is the best option, if we’re truly rolling w/Goff long term.
I’d LOVE to upgrade form him, but it is VERY difficult to do.
There’s only one Josh Allen…Right now, there are 31 teams saying they need a punter like Jack Fox…not…gonna…happen

My opinion on Goff is that he’s had a pretty good year overall but he struggles to make that key throw in key moments,

This wasn’t true when he had key WRs in key moments… That is why Goff should have gone to a proven St Brown on 3rd and 1 instead of a very unproven Chark. I think the TD they got earlier in the game gave Goff the confidence to go for the jugular (something fans have been asking for for 2 years)…

I predicted Goff would do very well here, and he has.
I predicted that he’d do well enough to create massive controversy…he has.
I DO think getting him his Gurley man is the best option, if we’re truly rolling w/Goff long term.

The talent is getting better and so if Goff and his confidence.

I think people forget that Goff was a 4 time winning QB with the rams and won 3 playoff games. That is the minimum bar and if that is not being hit, it’s likely deficiencies on the Lions and not with Goff. If anything he is getting better with time and experience. He is doing this without McVay which proves it wasn’t all McVay.

The Lions offense is playing better than the 2019 and 2020 rams offense (when they lost Gurley) but the defense is worse.

The defense has been much better but what does it rank the last 3 weeks? That will start to suggest what the Lions to be ranked and how many wins they could have had if they played this way all season.

There isn’t a QB in this league that likes pressure! Very few handle the blitz extremely well on a consistent basis. Unfortunately for Goff, he might be putting the nails in his own coffin. The team has shown signs of life and are playing better than ok. This means we will not be drafting in the top 5 soon and as a result the cost to get a QB after this year would cost TOO many beans.

So because they will be drafting in the middle of the pack and the LA pick looks good the LIONS are almost forced to take a QB with that pick. Also the 5th year option comes into play and with the relatively low cap hit you can still keep Goff. His decent play has almost forced the Lions to go QB this upcoming draft.

I think this week will be a big game for Goff lost a tuff one I wanna see how he plays this week. Jacksonville isn’t a give me. But a win would say a lot in my book.

If Holmes and Campbell don’t think there is an absolute stud QB available with their highest pick, they should pass. Because if all you get is a QB to develop who might or might not be better than they have, get one later with a cheaper pick.
If there is “The guy” then take him.
Getting the Lions out of the muck and mire was never going to be easy.

If a top pick to draft a quarterback is worth X, then it’s worth X whether the Lions hold that pick or need to trade for it. It’s no cheaper or no more expensive. The opportunity cost is the same.

The exact comp isn’t important. The point is that by exercising the pick, the Lions are turning down the 2200ish Johnson points worth of trade compensation from whomever. If they couldn’t afford to trade up for a high pick, how can they afford to not trade down?

In fact, the two most oft-cited “draft a QB” examples, Allen and Mahomes, were both drafted by teams who traded up to get them. It seems logical that a better team could afford to blow 2200 JJ points on one dude rather than across several picks.

Good point, but we could also use those JJ beans to add more talent (for our potential franchise QQ) rather than just one player.

He can have moments of toughness…and moments of panic.
OL is getting better.
One thing’s for sure, when Swift was scorching ppl for 10 YPC, the defense was shittingthier pants over the run game, and Goff didn’t have to worry about it.

IMO, Run game is a massive Key to making the offense trustworthy.

Defense WILL come (that’s what she said).
I completely trust Holmes to easily acquire talent.
QB is the hardest by a mile to get right.
He is doing fantastically with the trenches…and the other positions seem to be coming along nicely.

I say get Honey Mustard or Gibby (please be Sproles) to alleviate QB pressure and open it up for JaMoss.

Ra is support that is also good enough to make you pay. He has a very Golden Tate-like energy to him. I love how scared he ISN’T.
J-Moss - strikes fear into them…period. Can score at any moment on any play.
I want a RB that makes you pay too. Swift is that, but never available. Swift on a pitch count. Our RBs suck for FF. LOL. Too many of 'em.

Goff is a good player when not pressured, and is sporadically good when pressured. Let us reduce the amount of time he is pressured and boost the team’s chances.

lest I remind you that Goff had a broken asf team all season to play with , A depleted WR group, didn’t have Swift most the time, we switched play callers early on when we was losing every damn game, and Goff has no time in the pocket TO step up into it, and despite all the other horse crap --our offense has been 6th best. I am not worried about Goff , I am worried about health and talent we add besides QB “right-now” anyway.

With what Brad Holmes has done the last 2 years, I really can’t see a QB in round 1.

Can’t see Brad feeling like he is in a position to be “forced” to take a QB.

He has been steady, steady, process and plan oriented. If they do take a QB, it absolutely won’t be because he is forced to. It will be because that’s BPA at their pick.

Not buying that crypto…

This guy said it best in the comments:

Incredible. On one side of the ball you have a QB who ranks in the top-half of NFL QB’s despite missing his presumed #1 outside receiver all year and having his #2 outside WR playing only a few games (and playing badly when he does). Swift out and ow underperforming; Reynolds out a ton. Hock gone. The guy has played with ONE quality receiver all year. Injuries and underperformance mean that his OL have been "one of the best" ONLY on paper, which ain’t where the game is played.

On the other side of the ball, you have the WORST DEFENSE IN THE NFL for two seasons now - a.k.a., the entire time Goff has been in Detroit. A defense so miserable that even when the Lions had the highest scoring offense in the league, they still had a losing record the defense was even worse than the offense was good.

And some analysts think GOFF needs to be replaced for the Lions to be a playoff team? I’m noon saying Jared Goff is a top-5 QB or that it wouldn’t be awesome for the Lions to get one. But given that Goff already has a SB and two Pro Bowl appearances to his resume at age 28, the suggestion that the Lions need better at the QB position is pretty ludicrous. Second, how about shoring up the side of the ball that’s league-worst before pointing fingers at the side that’s well-above-average even with all the injuries?

With what Brad Holmes has done the last 2 years, I really can’t see a QB in round 1.

Can’t see Brad feeling like he is in a position to be “forced” to take a QB.

He has been steady, steady, process and plan oriented. If they do take a QB, it absolutely won’t be because he is forced to. It will be because that’s BPA at their pick.

He really has “walked down the hill”…he really has ignored the noise and moved forward in a methodical noise…listening ot himself and his inner circle.
He’s very committed to his plan, and he’s executing it beautifully so far.
2 years in…this looks to be a lot more than luck.