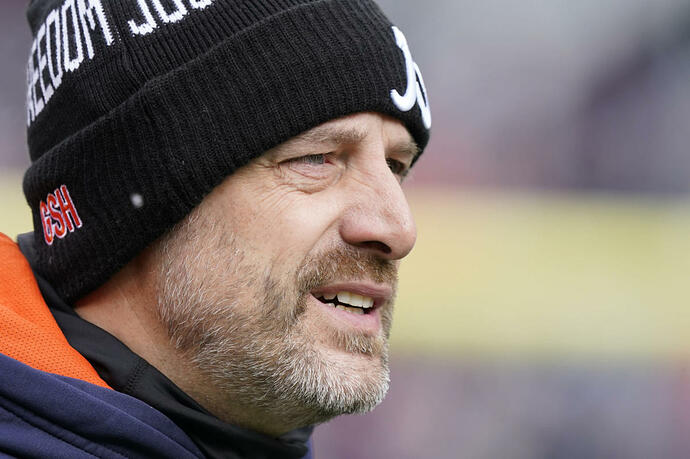 Report: Matt Nagy has been told he won’t return as Bears head coach

According to Boomer Esiason, Matt Nagy has been informed that he won't return as Bears head coach next season.

Chicago has to be the favorite to land Harbaugh if he goes back to the NFL, right?

It’s my wish come true if they do.

I wished they kept Nagy. Fields may have a chance with a new coach

I wished they kept Nagy. Fields may have a chance with a new coach

Exactly. I was hoping he could somehow hold on for another year. Also, I don’t want Harbaugh going there either. It would be a massive upgrade for them.

If Fields gets a good offensive coordinator/offensive head coach, and they draft a bunch of lineman…

IMO, this is going to happen. Chicago has been down too long and now the big market has a QB it can get ratings with.

2021 Bears took OT Tevin Jenkins in the 2nd and OT Larry Borom in the 5th. They don’t have much draft capital to do anything on OL. No first, no fourth, I’m not sure that this season is the right one to try and go down that road.

I don’t think so. Harbaugh is a naughty little boy. DC is a REAL alpha. DC knows who his is and doesn’t GAF about what Harbaugh thinks.

Shorts was offended, because he seeks validation from outside himself. He was quoted as saying “I thought I’d lose my Detroit card if I didn’t say something.”

Campbell might punch him in the mouth, if things went too far, but most likely would just perceive Harbaugh as a petulant child. Harbaugh did what he did because he could get away with it. Energy matters.
Shorts is a little boy trying to prove his worth. If he was in high school, he’d be an easy target for an insecure big guy, who is showing up like a naughty little boy.

Think of it this way…Harbaugh is a naughty, little boy, who has lots of control patterns. He happens to be a much larger little boy than Shorts.
Shorts is a little boy who doesn’t feel worthy and is trying to prove his worth.
Shorts is a prime candidate to be mocked and ridiculed by the bully.

Dan wouldn’t care what anyone thought. He’d view Harbaugh as an unprofessional child, and wouldn’t lose 7 seconds of sleep over it.

Energetically, Harbuagh wouldn’t even attempt this with Dan, because he would innately sense that Dan is the alpha. Not in a million years would he try that with Dan.

I really appreciate what Schwartz did in that exchange.

Schwartz has my respect as he helped bring us up out of the doledrums.

Loved his enthusiasm and fist pumps. While his teams did step over the line from time to time I will always appreciate how he fought for our team.

I actually have even more respect for Marinelli, but that’s a post for another day lol.

And Campbell, well I really like what he is doing here so far.

Natty, not that Dan Campbell would need any backup with Harbaugh but if he did, Fox would be the guy.

Fox would have put fear into Iron Mike in his heyday.

Did Nagy have to deal with Tribiski as a rookie and Fields?

LOL. Harbaugh will be a shrinking violet when he encounters MCDC.

Harbaugh will be a shrinking violet

Natty, not that Dan Campbell would need any backup with Harbaugh but if he did, Fox would be the guy.

Fox would have put fear into Iron Mike in his heyday.

Y E S
DC just looks to fox and gives him the wink. Jimbo pisses on himself as he scrambles to get to security.

No, Mitch was already there but didn’t start in 2017 until they started out 1-3. So Mitch was in his 2nd season.

How is Ryan Pace not on the hot seat too?

How is Ryan Pace not on the hot seat too?

I think he very much is, though there’s nothing official.