NFL Thanksgiving grades: Vikings, get a prime-time 'A-'; Cowboys, Bills shine in comebacks

Bills
The Bills weren’t perfect on this day, but Josh Allen made sure Buffalo wasn’t losing to the upset-minded Lions. Allen was excellent in the fourth quarter, going 10 of 14 for 90 yards with a touchdown pass (112.2 rating) along with five carries for 37 yards. When the Bills needed Allen to step up, he made sure Stefon Diggs was involved in the offense (Diggs had five catches for 65 yards and a touchdown in the final quarter), hitting him on the touchdown pass with 2:40 left and the 36-yard strike with 23 seconds to go.

Allen started the game only 16 of 33 before going 8 of 9 on the final two possessions. The Bills were able to counter that slow start by running for 164 yards and averaging 5.7 yards per carry (Allen had 10 of the 29 carries). Tyler Bass missed an extra point that could have cost Buffalo with 2:40 left in the game, keeping the Lions down by only a field goal, but made up for it with the winning 45-yard kick. He also made a 47-yarder before halftime.

Overall, the Bills win another one-score game and keep pace in the AFC East race. This was a massive win for Buffalo.
B+

Lions
The Lions certainly aren’t a pushover anymore, as they had a golden opportunity to end their five-game losing streak on Thanksgiving Day while extending their three-game winning streak. Dan Campbell and offensive coordinator Ben Johnson had an excellent game plan and were creative in the play-calling throughout the contest. Four fumbles (two lost) hurt the Lions, yet they still held a lead in the fourth quarter against one of the best teams in the NFL.

Clock management did the Lions in, costing Detroit the opportunity at the upset. Campbell didn’t take a timeout right away after a 15-yard reception by Amon-Ra St. Brown with 37 seconds left in a 25-25 game – letting the clock run 10 seconds before a review was made by the officials to determine if the Lions got a first down. Detroit didn’t get a first down on the play, as Lions quarterback Jared Goff then decided to throw a deep pass to D.J. Chark on third-and-1 from the Bills’ 33-yard line with 32 seconds left. The Lions could have ran a play, got the first down, called a timeout, and had another set of downs for a closer field goal situation – or go for the winning touchdown – and kept time from running off the clock.

Campbell could have called a run play on third-and-1 or have Goff go underneath and get the first down (the Lions still had two timeouts left). There was no need for Goff to go deep on third-and-1, even if Chark appeared to be open on the route. The poor clock management and failure to use the timeouts cost Detroit – allowing Allen and the Bills offense to win the game in the final 30 seconds.

The Lions can compete with the best teams in the NFL. They just have to learn how to finish them. 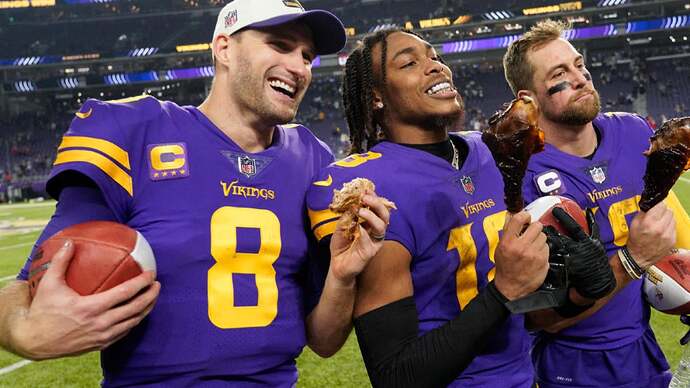 NFL Thanksgiving grades: Vikings, Kirk Cousins get a prime-time 'A-';...

Here are our grades for every team that played on Thanksgiving