There is still a ton of mystery about what the Jacksonville Jaguars will do with the first pick, and that means Aidan Hutchinson is still a possibility for the Detroit Lions. 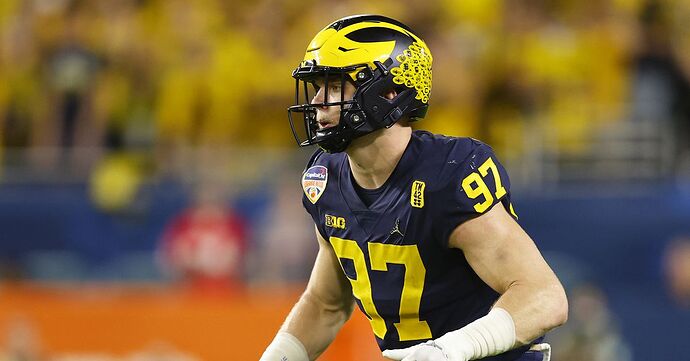 There is still a ton of mystery about what the Jacksonville Jaguars will do with the first pick, and that means Aidan Hutchinson is still a possibility for the Detroit Lions.

I would think it would make trading out of #2 a more difficult decision if Hutch was there.

Agree. But just by a little.
If we stay at 2 and Hutch is there, it will be OK. Just OK.

All this talk about the Jags going defense bla bla bla.
Pederson will get his way and they will draft an Offensive lineman.
Jags are going to go full Jags and take Linderbaum #1

there’s an Amon Ra link below, where our WR coach says “we always talk about will over skill.”

I love our coaches.

Hutch @2, and trade up for Davis…NIIIICE!
Complete overhaal for the D on that alone.

Add a late round Safety.

I’m kind of beginning to just want the lions to take Jermaine Johnson. None of the Thibodaux issues. No lack of production like Walker.

I know I’m not a pro scout, but when i compare these guys via their YouTube videos i feel like he’s the best of the bunch as far as the tape goes. (Assuming Hutchinson does end up going #1)

Not sure you can get high enough and keep 34… i like davis am just real concerned about his willingness to get down to 330 or so, or just get/keep his body right. Guy has had weight issues through his college career, now that you pay him a few million to get his body right does he do it? Guy is a beast but would love to see what he could be if he cleans it up some more.

The front 7 would go from a weakness to a strength with those 2 players.

I’d rather take a guy like Mafe, Ebiketie, or Bonitto who I think would all be great 7-10 sack rotational edge guys with good win rates.

Yeah, id love that for the lions. Id prefer they trade down over anything, i just don’t think there’s a lot of interest in moving up to #2 for most teams.

I’m curious why he feels his sources have Corral going to the Lions at 32. He’s the one QB I haven’t read about them meeting up with, unless I missed it.

There’s a ton of talk about them trying to trade out. They clearly want to move down.

The trade chart difference between the first and second pick is 400 points, which is worth additional 3 thru 7 picks and then some. Same is true for 2 and 3 and 3 and 4, 400 points. Difference between 4th and 5th is only 100 points. By the time you get to 9-10 it’s only 50 points. Not sure what scenario exists where any team would trade up into the top 4. NO could move up to 5 with their first round picks and their 6th and also get the Giants 3rd. If NO trades us to move up to #2 it would cost them 16 and 19 , their 2nd,4th,5th and 6th and a 2nd next year. 3 picks difference and it adds up to an entire draft even after giving up 2 firsts. I don’t see the move into the top 4 being worth it for any team this year.

I don’t see the move into the top 4 being worth it for any team this year.

That is the problem right there and why your not hearing Jax is dialed into any one player.

Jax needs to get past the bad look they’ve been putting out lately. They know they need to make a solid pick. They really do not want to be picking 1OA and have that pick bust.

With that in mind I think they maybe willing to trade out of spot for less than normal trade value.

For a team to trade up I think they would probably be targeting one of the top pass rushers, Willis or one of the top OT’s. Both Hou and the NYJ could go OT.

But to trade out of 1OA or 2OA the team doing it is not likely getting too trade value to do so.