Just saw on Mlive and didn’t see it posted here. 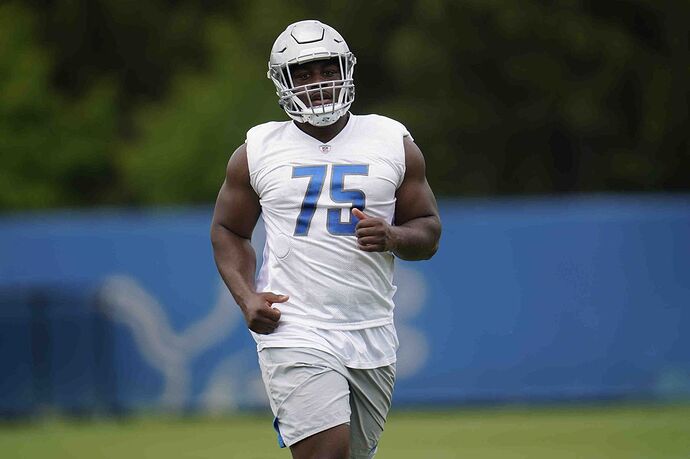 Onwuzurike will miss at least the first four games of the season as he tries to shake the back issues that have plagued him throughout his career.

Shut him down…get him surgery already and maybe next year he surprises us. Many of us have been saying this for weeks now.

The Den needs to start being phoned in to make second round picks. We have been so bad for the last ten years

With this open roster spot now we can sign Malcom Brown!

Who would have thought drafting an undersized DT that was injured and hadn’t played football for over a year was a bad idea?

With this open roster spot now we can sign Malcom Brown!

I don’t understand the fascination him with signing him. He could be slightly better than Isaiah Buggs, but I’m not sure of that, and I think Benito Jones is superior and fits our system better.

Half full part is this:

“The Lions elevated running back Justin Jackson and linebacker Anthony Pittman from the practice squad for the Eagles game. Pittman was one of the Lions’ best special teams players last season, and Jackson had a strong camp as the team’s No. 4 running back.”

Send him to Tijuana for some stem cell injections. Rest him up for 2 months and maybe he will be ready for the 2nd half of the season.

Too bad Barmore went three picks prior. Though I’m not so sure that Levi wasn’t Brad’s DT1.

I thought there was plenty of logic to the pick. We needed iDL, Brad wanted a pressure guy which was Levi’s strength, he plays hard. I didn’t love the pick myself but I understood it. It hasn’t worked out.

Honestly I’d blame our doctors more than Brad, they undoubtedly told him the injury wasn’t a long-term issue. No GM would draft a guy with a degenerative back issue. Or it could be Levi’s simply been unlucky.

Anyway I don’t blame Brad for it, every GM misses now and again, but I thought his logic/process was fine.

Brad took a shot on a guy at a position where we were terrible in rd. 2. I don’t have an issue with that but this is frustrating.

This sucks. The thing is I liked the pick

I liked the Pascal pick, too.
Getting a little discouraged. We haven’t seen Levi play a game that counts, yet.

Yep. Tough on the rebuild when two two’s and a one are contributing zero this year at this point.

I guess a win would make me forget all about it. Lol

Thankfully, they seem to draft really well in the 4th.
Thinking maybe should trade next years second for 2 4ths?