This idea came up in a different thread. Not sure how far I will go with it but it interests me.

Every position will have a slightly different peak age. A 30 year old quarterback is not nearly as old as a 30 year old running back. Further though, every player is different. Some running backs play are effective into their 30s. Some quarterbacks have high peaks and short arcs.

There are surprisingly few resources online (that I can find) that informs this question.

So I thought I would take a little stab.

Easiest to do is to look at positions that rely on counting stats, and thanks to fantasy this has been done. Here’s a graph for WR: 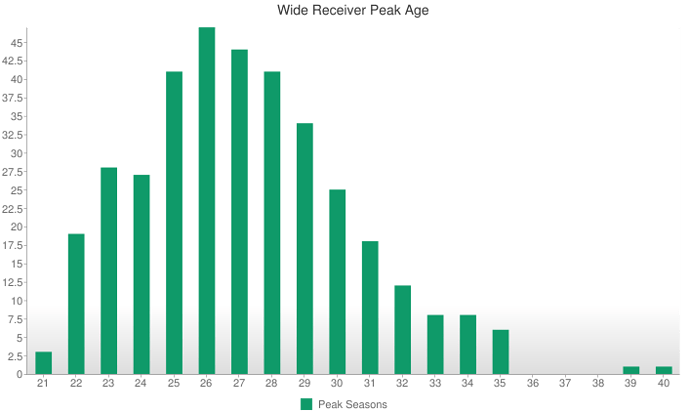 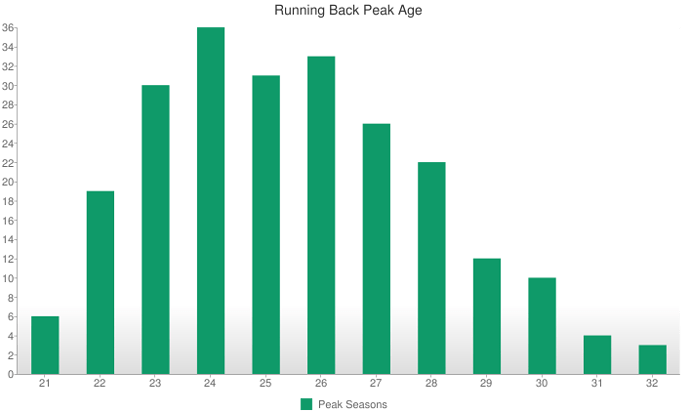 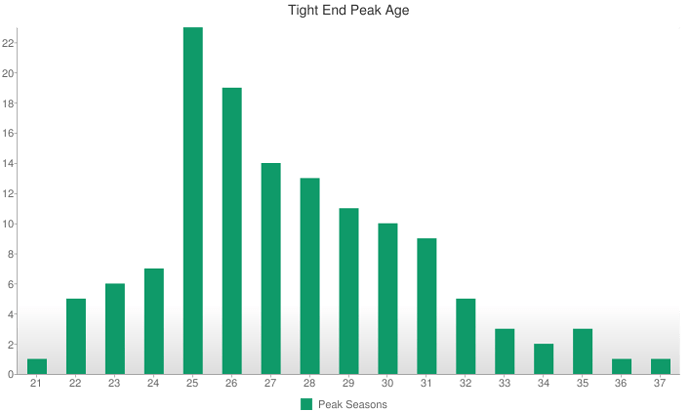 These graphs are all from https://apexfantasyleagues.com/

For other positions maybe trickier. One method is to look at ages of All Pros although that will be a bit biased toward older players. Alternatively, looking at PFF grades or DVOA year-by-year might be a better, more objective method.

Quickly looking at the last 15 years DVOA leaders for QB we get this spread of ages:

which puts the median at 31. This is confounded by a lot of duplication. One player is on this list 4 times (Rodgers), another 3 (Brady) which suggests that age isn’t the most important factor.

Mow resigning one of your own for another year or two that i can understand the coaches see his play an practice an would see a big drop off.

I feel same with WR

There are always outliners but when your talking the big cap hit I just like most to be under 30.
Interesting topic

I think some like any graph you should remove the say 2 youngest an 2 oldest to get a proper mean .

Juts my way of looking at it

For other positions maybe trickier. One method is to look at ages of All Pros although that will be a bit biased toward older players

All Pro will be biased towards name recognition. That will come from being an earlier pick, putting up a signature highlight play, or team success. When trying to judge players by how they actually play, I wouldn’t use All Pro status. A guy like Tyron Smith can miss half a season and still be named All Pro, for instance.

Really, some crazy stat guy could do total games started or games played by position, by age over 3-5 seasons and get a quality result. They do not have to be all pros or pro bowlers to be productive players.

Peak ages would flow from the results of all players just as well no?

Definitely a topic of interest

Nice breakdown, wish they had stuff on OL and defense, but fantasy don’t need it, lol