Caps son did pretty well. Levi is looking like a bust. Maybe we should just trade always trade down from the second round from now on

Levi is actually trash, and Barnes was all over the field.

This is what Boyle saw ahead of the interception. Raymond has inside leverage and Oluokun’s (54) initial step was to his right. Ultimately, the throw came late, the LB made an excellent recovery and Sewell was pushed back into the QB further compounding the play’s failure. 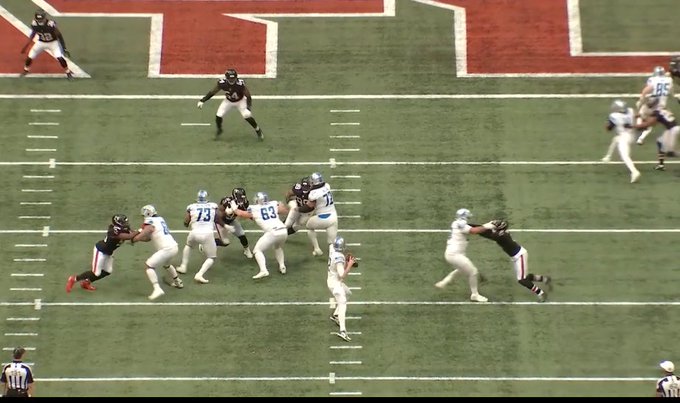 Levi is very inconsistent. When he fires off the ball hard he’s very good. When he stands up and dances trying to see where the ball is going he’s awful. I’m hoping age and coaching correct that next season.

Agreed, he’s flashed a bit. Got a sack, blocked a kick in recent weeks. Calling a rookie DT a bust already isn’t fair to the kid.

Alim has been a mix bag as well. Both rookie DT’s have been inconsistent, so has Barnes. They are all rookies, it’s tough to just jump in and perform in the NFL. All 3 of those guys need a true NFL offseason in the weight room and get mentally prepared for important 2nd seasons for them. the 17 game season must feel like forever for the rooks who might have played 11 or 12 in college.

Agreed, he’s flashed a bit. Got a sack, blocked a kick in recent weeks. Calling a rookie DT a bust already isn’t fair to the kid.

Good point. Was just being a bit reactionary.

2 of my favorite Lions D-lineman ever. Robert Porcher - Rookie season 1 Sack, Luther Elllis Rookie season 0 sacks. A full offseason with an NFL team, hitting the weight room hard will be big for these guys. They got their feet wet this year, got some experience, now they gotta step it up a notch in season 2! Same goes for Barnes.

Not everyone can dominate as a rookie like Penei!!

Shaun Rogers too. He wasn’t great his first several years. Then suddenly the lights went on and he was dominant. Sometimes it just takes time. Some of these kids just need to grow up a bit. Big difference between 20-21 and 25-26.

Especially in the trenches. Man strength is real. And the NFL vet o-lineman know all the tricks.

And that is what is exciting about Sewell, he’s a monster @ 21. Just imagine when he refines his technique and gets more experience. Sky is the limit for him.

Old man strength is even more real. My dad taught me that lesson more than a couple times. Lol

Wright and Zylstra are awful. The Lions need real TE depth next year.

The great thing about Sewell is I can see a Larry Allen like career for him. Plays at tackle for several years at a high level and later moves inside to guard and still dominates.

Yep. We need both a stud blocking TE and a talented pass catching specialist backup.

Levi is very inconsistent. When he fires off the ball hard he’s very good. When he stands up and dances trying to see where the ball is going he’s awful. I’m hoping age and coaching correct that next season.

Dude’s gonna get stronger and smarter…better instincts, etc. Hope he can be good. So far, I’m not seeing what I had hoped for.
I have faith in McNeil, for some reason…I see some improvement, but think he’s gonna improve a lot next year.

Levi and McNeil look nothing like that did in college. You see it at times, but it’s becoming a concern.

We passed on Christion Barmore for Levi. Wow that is stinging right now.

Btw…I liked Levi more than Barmore in the draft.

Levi is actually trash, and Barnes was all over the field.

He’s really struggling and so far has been a disappointment.

His play is the biggest reason why I think DT will be a priority come draft time.

I dunno but I’m not as concerned as others with Levi.

Call it a hunch, but I think he is improving. He missed a LOT of time earlier this year. He’s playing next to another rookie. He’s being asked to do things he never was in college. He’s also realizing he isn’t as strong as he thought he was.

The skills are there however. I just get the sense he will put it together.

Our defense as a whole has ‘Aubrey’ pleasantly surprised me this year. I thought we would be a five alarm dumpster fire. At times we have been at about a 2 alarm (Bengals game comes to mind). Otherwise for the most part we have been competitive. I think as the team gains experience Levi will grow.

Sometimes it also comes down to getting comfortable in a new scheme and learning to trust your teammates. Don’t try and do more than what’s asked of you. Not as a rookie anyway.

What bothers me with both Levi and Sewell is they let off the gas during the play. Neither are doing a good job of finishing consistently right now. Play through the whistle boys!