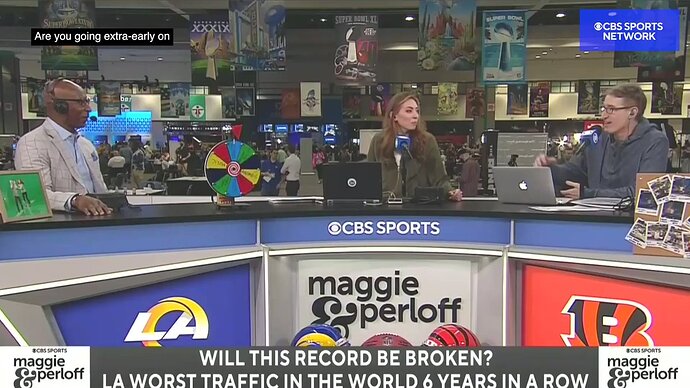 Arguably, one of the greatest Ram players of all-time. This is a total embarrassment.

That being said, ED sorta left on bad terms, I lived through it, now he makes amends 30 years later, my point is, he was your typical me first player and the Rams traded him to Indy

Not a company man while in his prime, so I’m going to push back on the “embarrassment” angle

Was that before the Rams traded LA for Indy too ?

I have zero desire to school you on Rams history, however Georgia Frontiere never had any business owning an NFL team and I’d prefer to leave it at that

Lol, c’mon man
Georgia Frontiere never had any business owning an NFL team and I’d prefer to leave it at that

Trust me, we know that feeling.

Not a company man while in his prime, so I’m going to push back on the “embarrassment” angle

Rams with the better ownership couldn’t survive in St Louis so bolted back to LA ? Can’t judge a player for being me first without acknowledging teams and ownership set selfish precedent.

The fact that you pointed out Indy and not STL indicates you don’t know Jack Soup what you’re talking about on this topic, that being said if you feel the need to escalate here, then please look up why the Rams moved to STL, it was most disgusting on so many levels

You may wanna just cut your losses here Billy

I think Billy’s confused and was thinking of this trade, which resulted in Faulk to the Rams and James to the Colts at No 4 overall:

Revisiting the Colts trading RB Marshall Faulk to St. Louis in 1999. With very little buzz coming out of Colts training camp, it seems like an appropriate ...

I was referencing the idea Dickerson was any more selfish than the Rams who have moved twice now n their fans chasing money.

I actually forgot that one happened.
I was only kidding where both Rams and Dickerson headed to Midwest area

@DreajFoge
Have y’all seen the terry Bradshaw documentary ? He really lets s
Known some interesting insight on being a player … makes me think of guys like Calvin Stafford Dickerson etc maybe now Burrow when you think of what Carson Palmer said …

The player ends up on a franchise
Not they’ve been fans of that franchise. 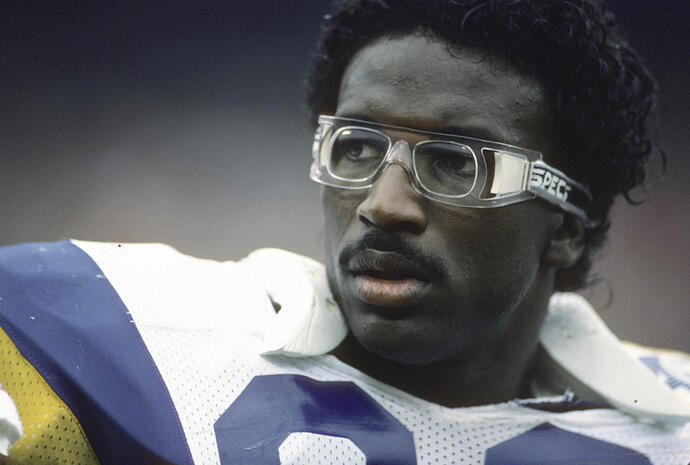 Eric Dickerson has a bone to pick with the Rams.

Seems, like most American companies have this attitude toward their employees, customers, and I dare say Americans, in general.

Dickerson and the Rams have had a complicated past.

Here is just one of the reasons… 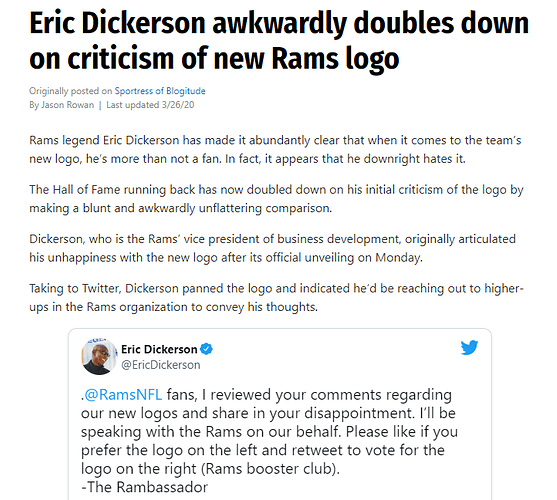 The Rams probably thought the goggles would help him view the game well from afar.

Dickerson is still pissed about the pay cut he took when he left SMU and got drafted by the Rams.

Dickerson is still pissed about the pay cut he took when he left SMU and got drafted by the Rams.

It will be blamed on some intern.

Who didn’t know who he was. Or clicked the wrong box when selecting the ticket(s).

It’s a stupid issue to create for yourself. Just fix it and move on.

You don’t put a legend in nosebleed-ever, it’s a slap in the face and I wouldn’t blame him if he is angry !

Thank them for the tickets, sell them, set up a spot in the parking lot to watch the game on tv and sign autographs.