Seen It From Brockers? 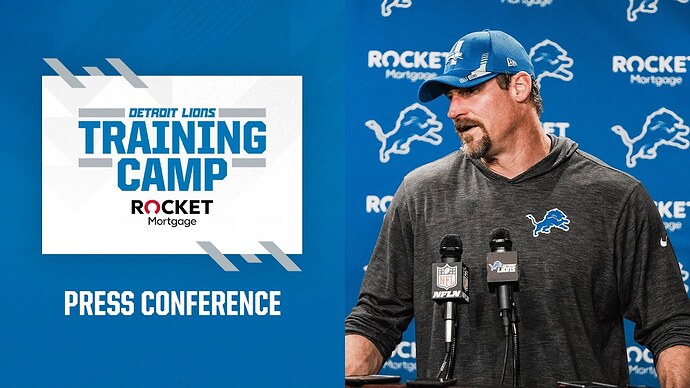 ✂️ Seen it from Brockers?

The last game-intensity practice of the pre-season was completed on Tuesday night. Has anyone seen, read or heard of one instance in training camp where Michael Brockers has shown it or that he “still got it”? I haven’t.

Chance that Brockers is cut?

No. I understand why Holmes brought him in, but he is not a quality NFL player. Time to cut bait and move on. Holmes really needs to do a better job bringing in talent.

Sadly, I haven’t heard his name brought up even once during training camp or preseason in regards to him making a good play, not once. I think he might just be over the hill.

You’re probably right but what is really discouraging is how many FA’s they signed that ARE contributing and at a fraction of what he cost. Justin Jackson at just over $1 million? I was pissed when we didn’t really add to the RB room and Goodson was available. This is a serious upgrade, really one of the more “under-the-radar” moves. Last year we had how many guys at NFL minimum type contracts, esp the CB’s.

As a child I loved The Brockers. Too bad Shawn Michaels turned into a douche.

I have a feeling he can turn it on a bit more when the need and opportunity is there. That said, the Lions should use young guys in most of the game to do the dirty work in the trenches and Brockers can be a crafty vet in the 4th quarter that is especially effective when teams are trying to come from behind and can only pass.

and Brockers can be a crafty vet in the 4th quarter that is especially effective when teams are trying to come from behind and can only pass.

I don’t know man, Brockers showed nothing last year as a pass rusher, literally 1 QB hit in 17 games. I think he’s a bit better in run defense, I expect him on the sidelines in passing situations.

He may have nothing left in the tank. I can’t say for sure… He went from a winning Rams situation to one of the worst defenses in the NFL last year and played heavy snaps in front of LBs that ran away from the ball and gap assignments.

I don’t think he was laying it on the line for that.

If the Lions start strong this year, I think we will see his best, whatever that best is. He may not be suited to do 40+ snaps anymore and may be better for ~15 snaps when you need a vet.

Well he’s not going anywhere this season because of his contract and the serious lack of depth at d tackle. He’ll be gone in the off season. I’m surprised Holmes was ok with such a lack of talent on the interior of our d line and still not grabbing one quality starting line backer in free agency.

He may not be suited to do 40+ snaps anymore and may be better for ~15 snaps when you need a vet.

I think that was the plan in drafting Levi, Alim and Paschal, who can move inside on passing downs, which he did at Kentucky a lot. The problem is 2 of them are injured and Brockers is likely going to be forced to play a ton, which is concerning.

I still think we will be adding a vet DT yet.

Doesn’t help that Holmes is drafting these guys that were injured and expecting them to contribute. I’m not counting on Pashal to ever be a regular at defensive tackle. He’s too small.

We need one more beast next to McNeil. I’d love to get a guy 320 plus and dare the opposing teams to try to run the ball up the middle

I’m not counting on Pashal to ever be a regular at defensive tackle. He’s too small.

Holmes said after drafting Paschal, he’s a big defensive end, who can move inside on passing downs. Same thing he said about Hutch actually. And we’ve seen Hutch at DT on 3rd downs already in preseason. Interior pass rush is vital and last year we had nothing up the gut.

We need one more beast next to McNeil

Agreed! Sign Malcom Brown! Then you can play Brown and Alim side by side in rushing situations and short yardage. That would be 650 pounds of girth inside!

Not sold at all on Buggs. The Steelers had the worst rushing defense in the NFL last season, dead last. And they cut Buggs, he couldn’t make the team, think about that.

Buggs even said he thought his football career was over before the Lions called.

Cut Brockers and get him started in his new profession:
Assistant D-Line coach.

Yep, they’ve seen what they’ve needed to see out of Brockers.

. This is a serious upgrade, really one of the more “under-the-radar” moves.

COMPLETELY agree. They haven’t used him too much, but he’s going to be a mid-tier difference maker at a great price. One hell of an insurance policy is his floor.

The problem is 2 of them are injured and Brockers is likely going to be forced to play a ton, which is concerning.

I still think we will be adding a vet DT yet.

This is all true, wether they add the DT this year or next. They may jus say “fuck it” and roll with the youth this year, as we are not in “win now” mode. Sure, we want to win games, but knowing we are adding pieces next year no matter what, and that we can do that better if we lose another game or 2? I dunno?
I almost feel like we let the youth get some experience and develop them this year…then next year draft the game wrecker DT.

I know some don’t want to hear it, among the Sea of Flowing Kool aid this summer, but the Lions are still steeped very deep into a rebuild.

This is a roster designed for development (losing). There’s a reason why Holmes was quiet in free agency and is drafting injured guys with high upside that likely won’t contribute much this year. He’s playing the long game. Guys like Brockers and Anzalone were not brought to take this team to the playoffs, they were brought in as mentors to guide along the youth moreso with leadership and off the field stuff than anything else.

Don’t get me wrong, I think Holmes and Campbell want to win now if the youth develops quickly but I think they know deep down inside that this is another development year and that it will take more time to playoff contend.