Speaking truth about the Negative Fans and Goff haters! 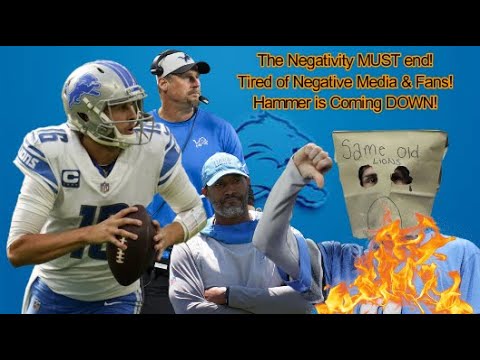 Just win baby! And the narrative will solve itself.

To be fair, this regime is where my optimism lies.
That is a huge change for me. I feek like we’re on the right track.

As to fan optimism, im sorry, but when I was your age I had that yearly optimism. Now try and imagine 26 yrs from now and still no playoff wins or a single nfcn champ season. You can claim to have seen the highs, ( i was at the highest of highs, our single playoff win since 1957, at the silverdome). and the lows. Sure for a mere 2 decades, and over 1/2 off that you didn’t truly even understand what you were seeing. You haven’t been beat down long enough to truly understand the pessimism long time fans have had beaten into them. You can’t because you haven’t experienced what we have in half the time or less than we’ve endured.

I will not question the pessimism, I get it. I’ve lived it, I’ve been within a hair of quitting the team and league altogether. The organization to this point has been the worst run, losingest franchise in all of pro sport. That is an incredibly pathetic excuse of a franchise. Fans of this nature have earned the right to see results before believing in this franchise. The majority aren’t die hards like we are. They don’t see the changes or culture shift. They refuse to invest the time and effort until they see results for a change. The amount of missteps and losing that’s gone on here falls on the organization, the distrust and lack of buy in from a large segment of the fan base is this organizations fault, not the fanbase.

As to Goff, I think your in the right ballpark, but left out that a large group want a running QB. They wanted one instead of Stafford too. Don’t get it, give me a Brady, Brees, Manning any day. Could careless about having a Murray or Jackson. The athleticism is a nice bonus, but my QB needs to be able to diagnose a D, manipulate the pocket, manipulate the secondary , make it through his progressions, and have the ability to throw anywhere on the field. The ability to run is the least of my worries.

Also - I like you and your take. I enjoy these takes.

As to Goff, I think your in the right ballpark,

I dont’ really think anyone is rooting against Goff. I haven’t perceived it, anyway.
It’s not cut’n’dry. I want a tougher QB. I’m okay if we get one by Goff toughening up.

Goff will win 10 games, this year.
This conversation gets a TON more controversial after we win 10 with Goff.

Could careless about having a Murray or Jackson.

Mobile QB’s tend to have shorter careers, like RB’s. Playing QB is dangerous enough. Add them to the running game, and injuries can be counted on. You better have a really good QB on the bench.
In other words, if you want a mobile QB, you better find two, if you want to win consistently.
My experience has been, finding one franchise QB is hard enough.
We lucked out when the Rams traded is another established franchise QB for our franchise QB when he wanted out.
If some of the fans around here had their way, we would have had a rookie (Fields) starting the train wreck, last season. That, would have guaranteed us the first pick, for sure, and probably, another zero win season.
Unless Fields has a major turn around, the kid is one of the 66% that bust…but, I’d love to have him as a backup.

I don’t hate Goff, and I don’t love him, but I do like him. He has a good competitive energy, and with the right pieces and coaching in place, I am optimistic he can do well. Time will tell.

I would think no one is actively rooting against any of our players. If they are then the heck with them. I for one think Goff will have a very good season.

Seeing as we have another thread where 37 fans have voted and not a single one has listed Goff as one of the 2 biggest weaknesses on the team, I think this thread was built on fake news.

Not to mention, I really don’t care when the last time that OSU and Alabama produced a great QB was, that is faulty logic.

that is faulty logic.

completely faulty logic.
Someone said 66% of OSU QBs fail…that’s a MASSIVE success rate, compared to any metric. If 34% succeed, that’s reason to grab them, not the inverse. Do the math on who fails and where they come from…they ALL fail…some just at higher rates than others.

if 90% of top 10 drafted QBs fail, but only 66% fail from OSU…that would be higher success than averages from anywhere.

Also - I like you and your take. I enjoy these takes.

Nah. I’m a very positive person. Except when it comes to football. The Lions only lose. Only ever have lost. It’s what they do. I can’t be positive about them until they prove me wrong.

I think this thread was built on fake news.

We all have a different definition of what a “negative fan” even is.
Then, we get into “Goff hating.” what is the definition of “Goff hating?” Wanting an upgrade? Is wanting him to do well, and having 2 fantastic QBs on the roster and trading one…is that “Goff hating?” What if you have Willis McGhee on your team, and Barry Sanders is available? Are you a “McG hater,” if you want to draft Barry?

Lots of assumptions made, but I like the vids and like that he shares them. I would encourage him to keep sharing them here.

I have been labeled a Goff hater by people who think we’re going to win 6 games, and I literally expect more from Goff than the “Goff lovers.”

Some crazy shit rolling through ppl’s minds, these days.

that is faulty logic.

completely faulty logic.
Someone said 66% of OSU QBs fail…that’s a MASSIVE success rate, compared to any metric. If 34% succeed, that’s reason to grab them, not the inverse. Do the math on who fails and where they come from…they ALL fail…some just at higher rates than others.

if 90% of top 10 drafted QBs fail, but only 66% fail from OSU…that would be higher success than averages from anywhere.

I’m not saying they’re good or bad, I have opinions but not sharing them here, I’m just saying I don’t care where they went to school. Of course it matters, better competition matters, lots of things matter, but great players can come from anywhere, and certainly from these 2 schools. The notion was ridiculous.

I’m tired of Goff threads.
Seriously, this team is full characters and storylines. Too many to dwell on a single player.

And, just for a dose of reality, please consider for a moment that the big networks listed QB as a need for Detroit. It doesn’t make one a hater if they’re concerned about the position.

Goff and Tim Boyle isn’t the greatest QB room that’s for sure. Do I want Goff to fail? Hell no, the season is over if he fails.

Nah. I’m a very positive person. Except when it comes to football. The Lions only lose. Only ever have lost. It’s what they do. I can’t be positive about them until they prove me wrong.

If someone dates a woman…she cheats. What’s the feedback? Women are some cheatin’ass ho’s? Or…I dated the wrong woman?

The last regime’s failures have nothing to do with this regime’s success/failure/future. Absolutely Zero.

Instead of looking at the Lions record throughout history…consider WCF’s ability to hire a winning coach. He was AWFUL at hiring winning coaches.
Also → he’s not the guy tat hires coaches anymore!

If I’m going by what people say, Brad Holmes is one of the biggest Goff haters out there. His endorsements sound like the guy is barely hanging by a string and could be replaced at any moment.

Past failures do not have anything to do with future results. I agree.
But past optimism’s, that I had many times over, do teach one to keep their future desires in check. While not all women are cheating ass ho’s, being prepared and able to accept that the next one might be a cheat isn’t a bad approach in my book.
I hope this is finally the group of guys who propel this team out of futility, but I gotta see actual results before I believe.

You can’t say we’ve made a complete break from the past when the Ford family still owns the team. I’m really impressed by Sheila. I had no idea she was that into football when she first took over. She cares a bunch. But how will she respond when she makes a bad choice. When her old man made a mistake with Matt Millen, he didn’t have the balls to correct it. That’s still an unknown as far as Sheila. It’s easy to be the good guy but sometimes you have to be the bad guy too.