After those combine results id go all Ga walker or davis pickens and Dean. If they fall into place of course only 3 of them.

Walker is a legit option at 2. I like Pickens. A lot. But if drake London is there at 32, you take him.

Londons been mocked to be in the middle of 1st i doubt hes there.

I agree on Walker and wouldn’t be opposed to him going at 2.

GA guys did a fantastic job.

However, Hutchinson did a great job at the combine, and with his Michigan connections/storyline/ticket potential, he’s the guy for Detroit if he’s there at #2.

Why wasn’t Travon Walker more productive in college? 6 sacks, no forced fumbles.
I mean what gives? Seems like he should be doing a lot more.

Depends on how you look at it. That defense could have all 11 players drafted. It was stacked.

Agreed that he very well could be the pick and deserving in his own right. But if you are taking him based on the Michigan criteria then you are stupid. It’s a business and I get it but you should be taking the best possible player. Storylines and college proximity doesn’t win you football games, the actual talent does. Walker is bigger, longer and I believe faster then Aiden. All things to consider. Aiden was great at the combine. Walker was off the charts.

Michigan Man means squat to me. Great character means a ton. It’s that 2nd part that gives me the warm and fuzzy about Aiden. Character and work ethic are off the chart. That and his production on the field of course.

Scouting report i read indicated he didnt have a large arsenal of moves. If his firsr move didnt work, that was it.

Interesting, hoping to hear from frm710 about his opinion since I know he’s a Georgia fan and follower.

@kmeinke
Aidan Hutchinson is so big and powerful. He's also an elite athlete. The only player with a faster shuttle time at the combine is Calvin Austin, a receiver who is 11 inches and 90 pounds smaller than him Hutch's RAS ranks 20th out of 1,359 DEs (@MathBomb) https://t.co/QQnRvO2NmZ

This is pretty impressive. He also has more than one move and seems very teachable.

Nothing against Aiden its just the results of combine that have me feeling about those GA players . I would consider a small trade down land some more 2nd or 3rd picks and still get a helluva player in rd 1 .

Aiden was tops in the 3 cone drill though.

The 3 cone drill is one people may not be as familiar with as the other drills. It consists of a series of quick five-yard sprints and tight turns, using three cones that form an L-shape as guides.

The drill helps to identify a player’s ability to quickly change directions and how well they accelerate. It’s thought to be a useful measuring tool particularly for pass rushers, though wide receiver Jeff Maehl’s 6.42-second run in 2011 is the combine record. 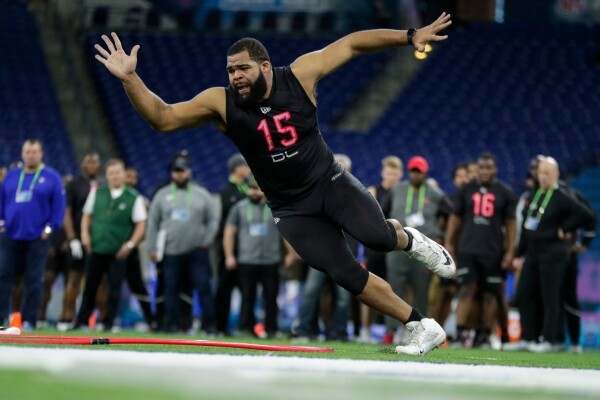 You’ve probably heard of the 40-yard dash and bench press, but what about those other drills?

He also split time between the 3T and DE.

I couldn’t find his year end stats but I found several per game stats and it appears he average between 40-75% depending on the game. If I had to guess I’d say around 60-65% on the season.

@socko keep in mind too that if Walker took more snaps and was closer to 50/50 vs run and pass like most DL then his sack count wouldn’t have doubled. Because 75% of his snaps were vs the pass.

That means Walker likely would have had 8-9 sacks on the season if he had played full time.

I can’t help but think now after this combine that this Georgia team was one of the most talented college defenses ever assembled.

@socko keep in mind too that if Walker took more snaps and was closer to 50/50 vs run and pass like most DL then his sack count wouldn’t have doubled. Because 75% of his snaps were vs the pass.

That means Walker likely would have had 8-9 sacks on the season if he had played full time.

I’ll add to this thought… Walker was also used on stunts quite a bit, and his role was often the penetrator (TWSS BigNatty) that occupied blocks to allow a teammate to loop around on the rush.

Everyone should keep in mind that UGA ran a lot of 3-man fronts and blitzed LBs from that front.
Note: 5 of the top 6 UGA sack leaders were LBs .

Here is Walker deflecting a pass in coverage…
8 yards off the ball. 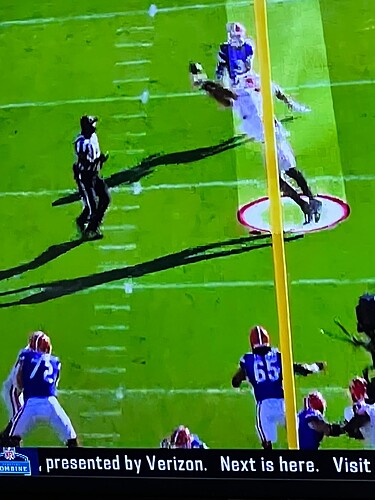 He got moved around quite a bit, and his responsibility was not always to rush the passer… even on passing plays.