To maintain win streak, Lions must capitalize on Josh Allen's propensity for mistakes

“(Like) we talked about (with) Barkley last week, everything starts with this guy,” Campbell continued. “To say that you’re going to completely shut that down is hard for any defense, but, certainly, we’ve got to contain him as much as we possibly can. And I think that a lot of that comes on challenging the perimeter. And there again, a little bit like Chicago, we’ve got to, these rush plans, we have to control the rush plans or have a controlled rush plan with him.”

Allen has had his fair share of issues with turnovers, something that’s plagued him throughout his career. Possessing one of the strongest arms in football, he’s willing to take more chances than the average quarterback, which also results in more mistakes. And after averaging 11.5 interceptions his first four seasons, he’s been picked off 10 times through 10 games, including four games with multiple interceptions. He’s actually been a bit lucky in that department, having been responsible for a league-high 19 turnover-worthy throws, according to analytics site Pro Football Focus.

“It’s huge; we desperately will need (turnovers),” Campbell said. "We’re going to need them, and look, that’s been part of the secret sauce for us. We are getting them, and that means we’re turning a corner because we are getting them out. So, we’ve got to continue that trend, and if we can put him in a position to where he feels like he needs to get rid of the ball and we get our hands on it, we have to capitalize. 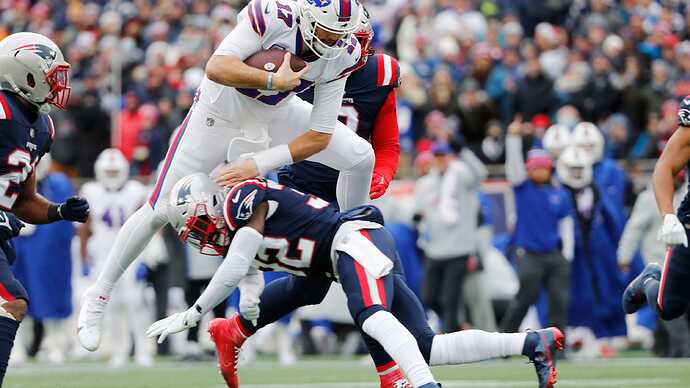 To maintain win streak, Lions must capitalize on Josh Allen's propensity for...

The Detroit Lions have seen a run of dual-threat quarterbacks, but on Thanksgiving, they'll have to beat the best of the bunch in Buffalo's Josh Allen.