Definitely worth the listen. Talks a lot about Houston and why it took so long to get him snaps and how he has progressed as well as the impact Cominsky is having.

We have a few keys FAs this off-season, but Cominsky might be the biggest. It was crazy how noticeable the difference was while he was out with injury. Basically said Cominsky is a coach on the field and tells the rest of the DLine what to do when they aren’t sure. 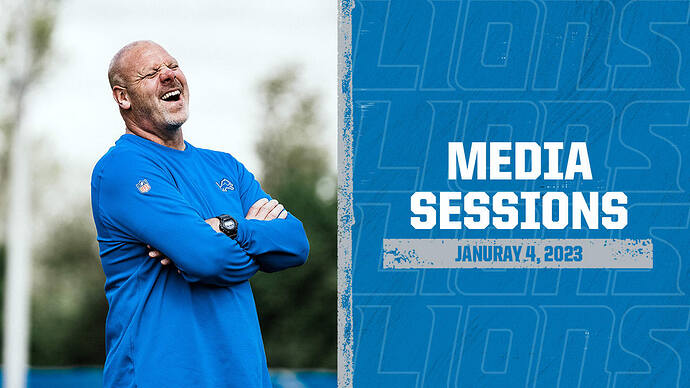 Wash on Cominsky's leadership in the DL room

DL coach Todd Wash speaks to the media about John Cominsky's leadership in the DL room as well as James Houston getting more opportunities.

I agree about Cominsky being the glue that makes it all work on defense. The top defensive priority to retain this off-season, even over Anzalone.

To me we need Chark, Cominsky, Jamaal Williams and then Evan Brown back. In that order.

Chark and Cominsky are the key resigns IMO. As much as everyone seemed to hate Chark for some reason he’s a good player who would start most places. He’s worth resigning.

Cominsky obviously has a huge impact and needs to be resigned as well.

Bill Goldberg is doing a good job with the young D-line. As much as everyone seemed to hate Chark for some reason he’s a good player who would start most places. He’s worth resigning.

I admit I was pretty pissed at him during the first half of the season. He’s not great but he’s very good. Health is a concern. He also mentioned “the 3 bigs”, indicating we’ll be seeing more of our 3-4 defense this weekend.

He also mentioned “the 3 bigs”, indicating we’ll be seeing more of our 3-4 defense this weekend.

I dream of a future Peter King article detailing the disconnect between DC, TW and AG.

Nice vid, really like this guy he deserves the time he is getting he just quitly produces

Thanks for posting.
Two things come out of this for me, probably already stated.

I believe he injured it his 2nd game back and then missed a game or two. Paschal is a lot like Jamo this year in that they missed a ton of the off-season and then a bunch of time in the regular season. Paschal and Jamo will look a lot different in 2023 when they get a full off-season of focusing on football and getting live reps.

Interesting to hear Wash admit they’ve been a bit “shocked” at the rise of James Houston. He says Brad knew all along but the coaches were like “hold up there a little bit” to the front office - then laughed and admitted Brad was right. Love the candor

Interesting to hear Wash admit they’ve been a bit “shocked” at the rise of James Houston. He says Brad knew all along but the coaches were like “hold up there a little bit” to the front office -

I’d love to know how much of the DL improvement and rise of all these rookies is actually Wash. He had some top DLs at Jacksonville.

Clearly Holmes identified capable guys, but it takes coaching to get this kind of production.

Still trying to figure out Glenn as a whole as well.

Chark and Schuster are the jewels of the WR class. It it’s about absolutely top dollar he’a gone. He supposedly loves it here so it may not be about absolute top dollar.

Comiskey is the one must resign IMO.

At the right price. It’s a poor wr market and all it takes is a team like the bears desperate for a competent wr to throw the bag at Chark……don’t want to match that.

Yep. He can probably go get 17-18m if he wants to leave Detroit. If we can keep him for say 3/39m then I’d think about it but personally I’d rather pool our money and get one true defensive difference maker.

Comiskey is the one must resign IMO.

Yes sir and Jamaal Williams is a must sign. He loves the game the city the coach and the team. He is going to do whatever is asked of him without complaining. Perfect team player

Oh right. Yes. Jamaal is absolutely a must sign for the Pokemon references and Shakira dancing alone.