Top 100 according to NextGen Stats

“How Next Gen Stats Grading Works”
The Next Gen Stats grade is calculated by complex algorithms based on a combination college production and athleticism. Prospects are graded as Elite (90-100), Good (75-90), Average and Below Average (no Average or Below Average athletes are listed below).

I’m guessing that was generated before the combine since the safeties are still testing, I believe.

I think they’ve been updating along the way. I’ll spot check a couple right now and then maybe cross-check the whole list in a couple days. (Safeties have been done for a couple hours.)

Some of those people weren’t in the combine,(see Charlie Kolar)…

I think its a very good discussion tool. Thank you for posting it.

Looking at the top of the list and piecing together what I’m hearing about Breece Hall, it almost seems like he is an Adrian Peterson level of back. But looking at the film, he is not. He’s really good though. I like his willingness to play with the hole (hehe) which gives the coaching staff options of how to attack with him. You can run the exact same play but have him attack it differently based on what the defense is doing or any “problem” defenders that the team is struggling to block.

So the Bears traded up to get the last Iowa State RB, David Montgomery. Same mo as Hall, hard to bring down, led NCAA in yards after contact but somewhat slower. But the Bears gave away what essentially was David Montgomery in the person of Jordan Howard. BOTH those players need 20 plus carries a game to get real numbers. I think Hall is that guy and I think Walker is that guy, neither to me is really a complete back for different reasons. Walker has issue’s blocking for his QB and is not now a receiving RB and Hall has vision issue’s. But, you give both those guys 20 carries a game and they are going to be seriously punishing the D by the 4th quarter. You really need to be either playing ahead or close to plan on them getting that amount of carries. We are a committee approach at RB, certain skills for certain situations. That’s why ypc can be pretty meaningless for a guy like Williams who got 3rd and short over and over. He led our team with 42 first downs last year. There is no way that Breece is the player they have ranked him to be and I like him.

Does this list have historical correlation to nfl performance?

I’ll dig up some on this later, but it’s the first year I’ve seen it from Next Gen stats. Good question, though.

I just love predictions based on calculated complex algorithms and a combination of other stuff. The more complicated it is the easier it is to pass it by and ignore it. Especially when none of it really matters anyway.

I think its a very good discussion tool. Thank you for posting it.

I do think it’s a good discussion tool but I see a real flaw in it too.

Not to mention speed seems to have a heavy influence on the players end score.

I haven’t dug in deep into how their rankings work but on the surface this sticks out to me.

Does this list have historical correlation to nfl performance?

Not that I can tell.

I see KW3 is still not getting any love.

Just can’t drill in here to see where the grade falls off for Walker. 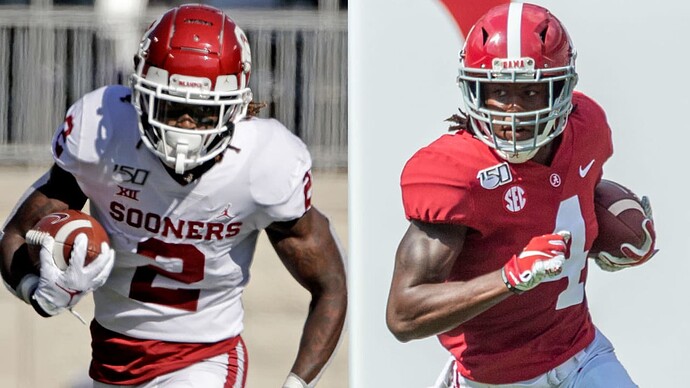 Which promising prospects -- like CeeDee Lamb and Jerry Jeudy -- will become productive pros? The Next Gen Stats Draft Model uses data to predict the likelihood that prospects will have NFL success. 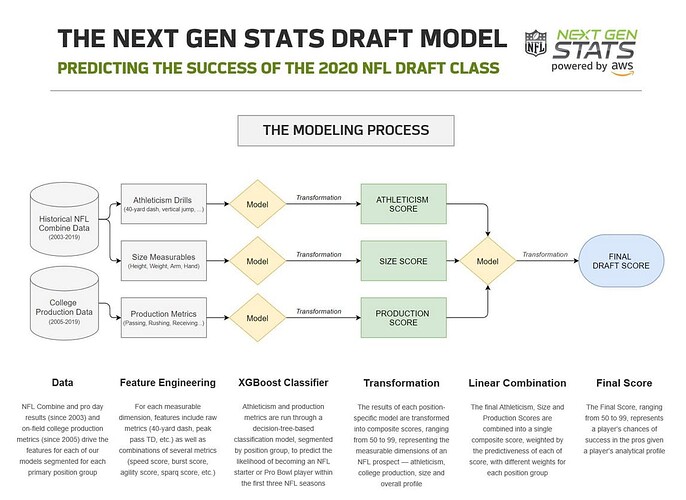 Maybe because it uses their entire body of college work instead of a single season? Really interesting that Josh Allen got a 99.

So obviously we will be taking Sauce Gardner @ #2OA then