The Athletic has a new mock where we do just that (I’d link it but it’s behind a paywall). What would you guys think? They don’t say what we gave up in this scenario, but you can’t imagine it would be cheap. But then we’d be able to draft Hutch and everyone would be happy.

Edit: here’s the link for subscribers: 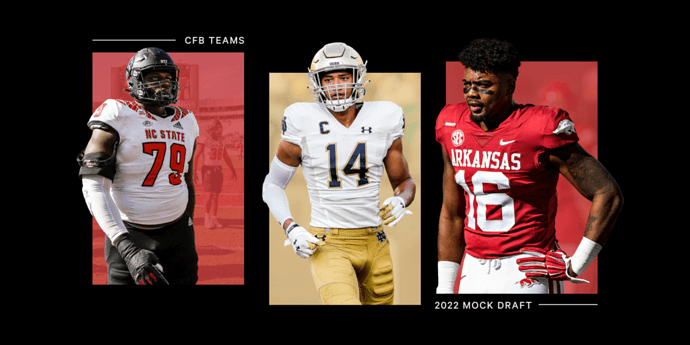 Who goes in the first round of our college football reporters' mock draft?

everyone would be happy.

I stopped reading right there. LOL

I’ll read that article in a bit, but that trade just isn’t happening and not just because I don’t want it to. OK, maybe swapping for Jalen Elliott…

All they had to do was put in tank commander Tim Boyle if they wanted that pick. That’s a big no.

There is no player worth that. Even Hutch. In this deep but no elite draft class are more picks better than just high picks.

I dont view hutchinson as a cant miss prospect, it isnt like he doesnt have any questions. So why would the lions trade up 1 spot to get him when they can either take from all the other players that also have questions or trade bqck and get more cracks at it. I dont see the lions trading up to 1 for hutch

Hutchinson gone just makes it far more likely I trade for Deshaun Watson. I know the Lions won’t. But I’m not the Lions. And I would win more than one playoff game in 60 years.

We’re too talent deprived to give up the equity it would take to move up the one spot.

I’d trade down and if I can’t I would take KT or Johnson and not look back.

Houston doesn’t want veteran players, they want draft picks, high draft picks, and they would probably like to get a QB back, although Davis Mills isn’t too bad. I would say the only team better positioned than us is Seattle and it’s really almost a tie.

I mean we’re a dream trading partner for Houston. Send their spoiled child to the worst sports franchise on Earth in the other conference. The only obstacles would be getting Watson to agree to it (the easy part) and getting the Fords to agree to it (better chance of waking the dead).

I’d trade down and if I can’t I would take KT or Johnson and not look back.

Agree. To me Johnson showed at the Senior Bowl, that he want’s to dominate. Unless he sucks at his pro day he has the ideal size and 4.58 in the 40 isn’t shabby. Like to see his 3 cone drill to see the bend. KT has question marks but if he wants to “build his brand” he has to show up on the field. Simple as that. I don’t think Campbell will simply let him go through the motions.
Air, I know you aren’t sold, but I think Travon Walker has a chance to be really good too.

They are all prospects still at this point. The NFL is a different game. None of these guys will play 80% or more of their snaps against guys who never were going to get drafted, like in college.

these 1 through 5 picks aren’t good picks this year. We’d go from unlucky to stupid.

Watson is getting traded well before the draft. Probably this afternoon if I were betting.

Technically the Lions wouldn’t know who was going 1OA at the time they’d have to make the trade.

Only if this is effective …

Watson is getting traded well before the draft. Probably this afternoon if I were betting.

Technically the Lions wouldn’t know who was going 1OA at the time they’d have to make the trade.

That’s true and I was thinking that. Would probably have to guess. Honestly, if I like the deal it’s getting made even if I think Hutch is there. A franchise QB for the next 10 years would be incredible.

The Lions might have the assets to trade for him, I don’t think they have the cap space to fit the contract. But I guess that could always be created.

It would severely slow the building of the rest of the team though.

Pretty sure Dead Stroke said that if Goff was going the other way we could make the deal work dollar wise. My proposed trade was this years 2, 32, next years Lions first rounder, and Goff. Not sure if that gets it done but is much more than we got for Stafford. That still gives us pick 34 this year and the Rams first round pick next year. Hardly going to kill building up the team.

I believe they’ve said no QB in return.

I haven’t seen that. Where did you see it? I was just having a nightmare of Green Bay packaging Aaron Rodgers for Deshaun Watson. A 3rd decade of Green Bay elite QB play owning the NFCN.

One of the many article on PFT. I think it was one talking about Watson to Cleveland. I’ll see if I can find it but their site is a bitch to navigate in my iPad. Page just reload endlessly most times.

Mayfield posted a goodbye to Cleveland in the last 24 hours, so makes you wonder if that’s the preferred partner as of right now.

With many uncertainties, here is where my head and heart is. pic.twitter.com/psipN96cmh

Air, I know you aren’t sold, but I think Travon Walker has a chance to be really good too.

I think he has the chance to be good to. At times he is dominating but he had stretches where he wasn’t as well.

I think he’s more inconsistent then a few other options.

I just think the concerns are a lot higher than the board does that’s all.

I like him as a player but not at 2OA.