If true, this isn’t great. The article is about Campbell/Holmes completely ignoring Crosby’s complaints of back pain. He just underwent spinal fusion surgery as a result.

@
Some tough things to read in here. Crosby has always been an opinionated guy, but also very fair and well-liked. "I wouldn’t want to play for that organization just knowing what I know now and just how poorly they treat their players."

Maybe misdiagnosis? Didnt the head athletic trainer get canned after this?

Crosby didn’t play at all in preaseaon, so I’m not sure where the injury was from. I remember being surprised that we waived/injured him.

They did fire the athletic trainer during training camp last year (he was a Quinn/Patricia guy).

It doesn’t appear that most Lions players feel they are treated poorly, have to see if there are more in coming years. But a lot of players do get hurt when they are cut, could just be sour grapes from Crosby.

I liked Crosby, but c’mon dude.

could just be sour grapes from Crosby.

he needs to go eat some Jello Pudding Pops and stay away from the roofies.

Stils and Nash will get him to shut his pie hole. He’s ruining their rep too.

I have to admit, I’m a little interested in the story and reading what he had to say, but…
not interested enough to pay the Freep to read it.

I remembered there being some question around Crosby and the Lions last year. I completely forgot that the surgery and “misdiagnosis” claim had been levied 7 months ago. 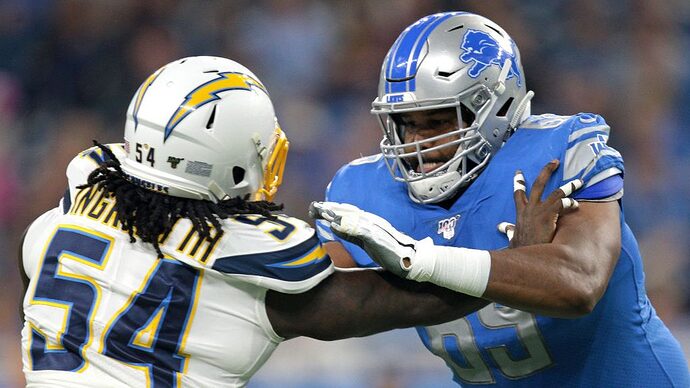 Tackle Tyrell Crosby has spent the entire season on injured reserve for the Detroit Lions after being waived/injured by the team at the end of training camp. Three months after he moved to the team’s injured list, Crosby had surgery.Crosby posted a...

…now back to Jerry Springer.

Crosby didn’t play at all in preaseaon, so I’m not sure where the injury was from. I remember being surprised that we waived/injured him.

They did fire the athletic trainer during training camp last year (he was a Quinn/Patricia guy).

It doesn’t appear that most Lions players feel they are treated poorly, have to see if there are more in coming years. But a lot of players do get hurt when they are cut, could just be sour grapes from Crosby.

I just read he played 9 snaps against Indy last year to start the game. I watched a highlight video real quick… and saw Kwity Paye blow by him for a strip sack.

Here is part of an article from when he was released… and Campbell’s honest assessment could be what he didn’t like.
. 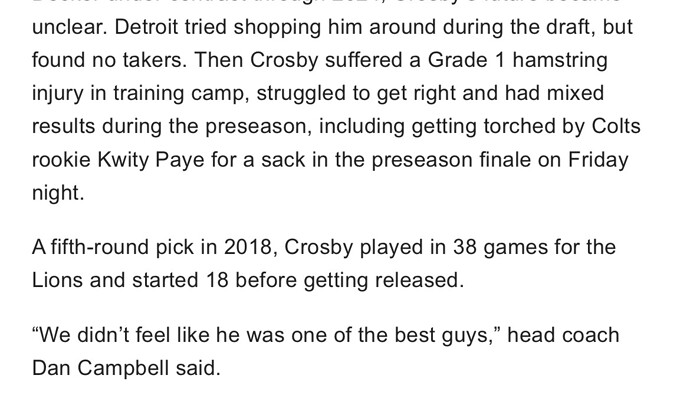 The Birkett article is a soapbox for Crosby’s gripes without comment from the Lions. Crosby’s most damning quotes are paraphases of Dan, Brad and others, framing it as damning because of what it felt like to him.

For instance, Crosby didn’t attend OTAs because he was homesick after COVID restrictions. “Dan and others seemed to hold that against him, and that was part of the reason they were nonresponsive to his complaints of back pain.”

From the Birkett article:

He said Campbell and general manager Brad Holmes called him into the office last spring pretty much saying how I’m bad for the team because I walk around like I don’t care about my teammates, the city of Detroit, the staff members when that’s everything of those are like the furthest from the truth.”

Crosby also says he was fined $5000 for missing a scheduled lifting session because he was getting treatment for his back. Basically, he doesn’t accuse the Lions of doing anything that hastened his spinal issues, just that they didn’t understand his pain and were insensitive.

That’s how it strikes me.

These kinds of situations are hard for all NFL teams. Injuries and $ is a bad combination. This is a brutal sport and the schedule doesn’t change because one guy is hurt. I’m sorry that Crosby was hurt.

The flip side is I think Dan Campbell is and was right. Crosby wasn’t a top three player at that point. Matt Nelson was coming on, Crosby was out and his starts were filled with good and bad film. So the Lions cut him.

I understand why he is pissed. A misdiagnosis is hard to deal with. That doesn’t also mean the Lions were jerks about cutting him or that they were wrong to cut him. He is free to pursue his career with other teams. If his misdiagnosed injury is the reason he is still unemployed that sucks but that happens in a brutal sport frequently. This happens in all sports (misdiagnosed disuse). I wish him well but I don’t see this shade sticking.

And - from a very quick read in the church parking lot!

This guy was getting back treatment on his own? Went outside and chose to go with outside the facility medical advice and chose on his own for the fusion… and now that choice he made on his own if possible going to cause an end to his football career…? Is somehow now the Lions fault…

As someone that is now very familiar with spinal procedures and how things work I’d like to know what the diagnosis of his injury was. There are some conditions that you could get the surgery for that aren’t 100% necessary right now. I’m in that middle ground with my lower back. If it’s a misdiagnosis by the team doctor that needs to be looked into. You can seriously screw up someone’s life. If it was a choice that Crosby made then you don’t get to go complain in the media about it.

I just read he played 9 snaps against Indy last year

Crosby also says he was fined $5000 for missing a scheduled lifting session because he was getting treatment for his back. Basically, he doesn’t accuse the Lions of doing anything that hastened his spinal issues, just that they didn’t understand his pain and were insensitive.

That’s turd territory. Crosby could have scheduled his back treatment around any mandatory scheduled sessions. Maybe if he showed up and said, ‘Coach I’m here to participate as much as I can and support the team but my back makes it so I’m unable to lift today’ it would have gone over much better

Plus missing all OTAs with a new regime because you’re ‘homesick’. That is telling the team you don’t care as much as they do. Does he think he’s the only one who misses home? Get to work son

So there is some context. Do what you want with this perspective.

Rumor is Crosby was a great guy off the field but “last to the field and the first off” and that did rub the FO the wrong way. Wasn’t considered a MCDC guy bc of that. However, a lot of that was based on the treatment team saying there is nothing wrong w Crosby…….he was cut and they came to realize the treatment team sucked……and abruptly fired them. So Crosby might be 100% on point but it could have been a situation where the FO didn’t have all the information necessary.

Also the current regime’s fist interaction w Crosby was him, as mentioned, skipping OTA’s bc he was homesick….but he no showed and didn’t communicate at all w the team. Kinda sent a bad first impression. 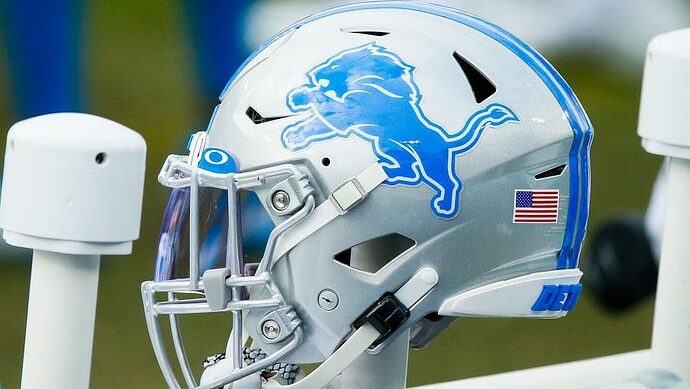 The Lions continue to make changes. Whether that changes the franchise’s fortunes remains to be seen.Via Eric Woodward of ESPN.com, Lions coach Dan Campbell said Friday that the team has dismissed head athletic trainer Dave Grantino.“Our guys were...

Here’s the thing, MCDC is far too emotionally intelligent for this to be 100% true. Now, was it a tough situation that he could have handled better? Maybe. If so he’d be the first to admit it, and I actually expect to hear something of a mea culpa from him. Good leaders take the blame even when it’s not their fault. But there’s just no way it was as malicious as its being portrayed.

Crosby didn’t attend OTAs in 2021 and I believe was the only OL to do so and one of two veterans to not report. (Collins girlfriend had a baby). I’m sure that rubbed the regime the wrong way
⁠
He allegedly showed up out of shape and behind with the playbook in 2021

He was injured almost all of camp, with various ailments

It’s interesting that he still speaks highly of the Quinn Patricia regime that we know mistreated players and whose holdover athletic trainer ostensibly was the one to misdiagnose him.