Who is Your Favorite Lion's Pick in this Draft?

I usually do a thread like this after every draft. It is a fun way of looking at the draft. In 2020 my favorite pick was Swift and then Jonah Jackson. In 2019 I loved the Amani Oruwariye pick. I still really like that guy. In 2018 I loved the Frank Ragnow selection. Perfect place to get an amazing center. In 2017 I really liked Jarrad Davis and then TE Michael Roberts. Not all favorite picks turn out well!

In 2021 I am really torn as I never, ever, for one moment thought Sewell would be there for us. So I never really thought hard about him being a Lion. I advocated for him being the smart pick, esp. over a QB.

So yes, I love the Sewell pick. I do love the DT picks but I was not into those players. I didn’t see us getting draft value for a DT in 2021. So I have to say Sewell is my #1 but I also really like the LBer we got in the 4th too. Derrick Barnes. I like his game a whole lot. I see Tulloch and Jarrad Davis in his game. He looks like a damn LBer and I LOVE that.

Sewell and then Barnes for my $.

I can see a pretty good argument for the RB we took in 7 too.

My favs are the DT picks, I think one if not both are going to be super solid NFL players.

I’m gonna say the Sewell pick because an OT prospect that talented usually doesn’t fall to 7.

I’m still catching up on the other guys, and growing more interested in Barnes, but Sewell is still easily my favorite pick this draft.

Most favorite = passing on Fields
2nd favorite = Bears trading up for Fields and giving up next year’s #1 (likely top 10-15 pick) to draft a guy I think will be out of the league in 4-5 years.

It has to be Sewell. He’s my favorite Lions draft pick since Suh.

Sewell.
It’s so important to have continuity on the Oline, and these guys will be together for years.

Close second for me is McNeil.
Just showed me how serious this staff is when it comes to building the foundation.

Sewell. He’s the best pick we’ve made since Calvin.

Not only does his tape, his athleticism, size, movement, instincts dictate a future pro bowler (at least) but he’s an OT with a highlight real. Watching him diagnose an edge pre-snap, and decide which way to take the guy with his own momentum is masterful. He discards his guy asap so he can lead down field on screens. It’s fun to watch.

I feel confident in “who we are,” and it’s mostly because A) it makes sense and B) “the Lions seem to know and embrace who they are.”

They are bullies. They want their pound of flesh.

Expect 5 man fronts with Okwara or Flowers dropping at times, and others all 5 coming down hill.

We don’t have a ton at LB, but maybe we only plan to run 2 off ball LBers most of the time.

Sewell epitomizes the identity, and will be a key piece

Can’t pick anything other than Sewell. A great pick at a great spot. Fortuitous.

Player I am most excited to see will be Barnes. Truthfully I think he will be a lynchpin of our draft. I expect the defensive front 4 to be improved but our LBs and safeties to be exposed. But if he plays well, a strong LB core behind that line will help us a ton and cover up deficiencies from our young secondary.

Suh was a great pick. No brainer of course.

It has to be Sewell. He’s my favorite Lions draft pick since Suh.

This is what I think too.
Sewell is the Suh of OTs, with a chance to be even better. He has no ceiling. Barring injury, he’s a pro-bowler.
This dude has a chance to be the best OT literally ever.

why I think so<<<
His body is not even a man’s body yet. Dude is going to get stronger - SICK!
I remember Suh shoving cutler down once. He just pushed the guy, and his body jerked to the turf so hard, he was called for unnecessary roughness. BULLSHIT!
Suh was so strong he grabbed a top flight RB by the back of the soulderpad and whipped him to the ground - was called for a horse collar tackle. It doesn’t make sense for your eyes to see that shit, because people can’t do that.
Sewell will be overpowering humans like this too, especially with a couple of years of strength conditioning and NFL practices. He’s gonna be an absolute bully out there.

Expect 5 man fronts with Okwara or Flowers dropping at times, and others all 5 coming down hill.

We don’t have a ton at LB, but maybe we only plan to run 2 off ball LBers most of the time.

Sewell epitomizes the identity, and will be a key piece

For this to be a real conversation, I almost think you have to say “other than Sewell”.

For this to be a real conversation, I almost think you have to say “other than Sewell”.

Yes! Read through this, and that is exactly what I was thinking. If Sewell isn’t the 99% favorite on here… something is wrong (+/- 1% error factor, of course). Aside from the Samoan sledge hammer, it’s Amon Ra for me.

I really like the Sewell pick, the possibility of having a dominant OL grew on me. That said I also like the DTs. McNeil was regarded as unique in that he could get pressure from the NT position, one of the few able to do so in this draft. Levi was highly regarded, but after the senior bowl got dinged a bit because he wasn’t in football shape, sat out 2020 and may have ended up dropping because of it. I think getting these 2 DTs and Brockers to mentor will pay huge dividends. We may have fixed the DL and the OL with 3 picks, outstanding! Foundational pieces you can build around.

I think building from the trenches out was wise, wish we would have been able to get a few more picks, but if we end up with 5-6 contributors from this draft, we’ve done well…and I can’t see any fewer than 5 contributors 1.Sewell 2 & 3. Levi and Alim 4. St. Brown 5. Barnes 6. IM 7. RB

Sewell for me. The offensive line has 4 starters in place for a while. Don’t have to think about the entire line over the next 2 drafts. Aside from a day 3 guy, or a really good OG for value. We can focus our draft resources elsewhere. That leads to a lot of future draft excitement.

The potential to have a Dallas Cowboys type line is something I never thought I would see here. And it’s exciting

Other then Sewell, I like Alim, I get happy visions of Jerry Ball dancing in my head.

2# Jermar Jefferson, RB, Oregon State pick#257
He’s still going to be mad 4 years from now. Like the chip on his shoulder.

I don’t know who’ll turn out to be the best pick (probably Sewell), but my favorite is this guy 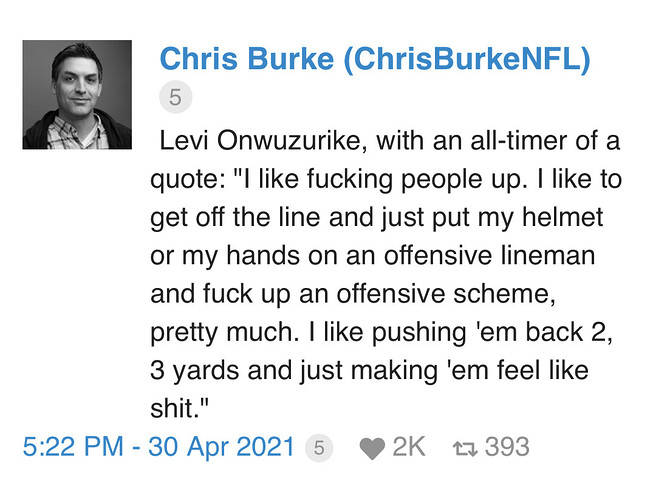 Did you watch the interview? It’s great. He’s a super charismatic dude. His tone wasn’t at all threatening. The tone was more like, “I have fun fucking people up. I plan on having a lot fun.” I’m excited to root for him as well.