This definitely is not the draft most of us had envisioned…

Guys- we had the worst defense in history last year, and it all started with DT play. Nobody got pressure, nobody ate up double teams, it was bad!

TO REITERATE- as of a few weeks ago our 2022 depth chart at DL was Flowers, Penisini, and J Okwara- that is literally it!!!

Fast forward to Holmes and Spielman and DC

There are plenty of guys to fill in at LB, S and WR

Also guys like Tre Boston, M Hooker, G Tate, and Dede Westrbrook could all still be cheap adds, and that is before the expected waive of cuts coming

Guys- we had the worst defense in history last year, and it all started with DT play.

Agree with everything. Nice post.
You HAVE TO be able to force the QB to make mistakes. And it all starts with pressure from the middle and allowing your ends/rushers to make the play.

Arghh… that LB core though…

I want someone that gets Jahlani Tavai off the field. That’s a need.

We gonna suck next year. The good news is Holmes is good at finding talent mid to late so it will be interesting today. Watch the lions for fun and see the development and watch stafford kill it with the Rams… 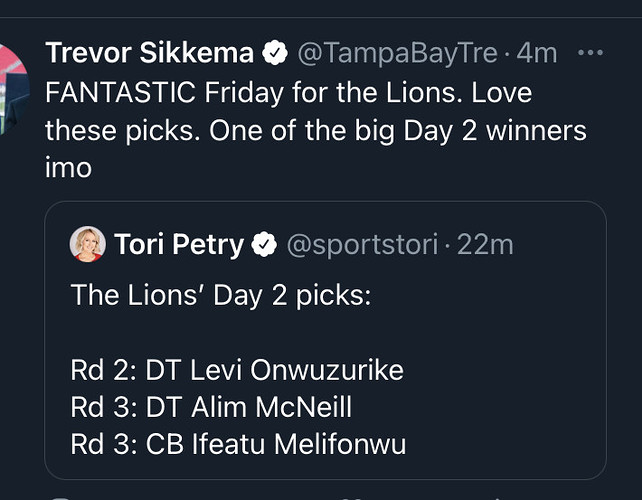 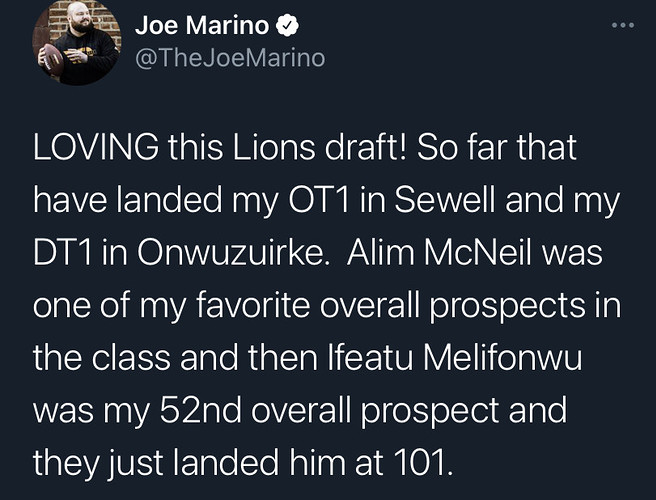 These are two dudes I really respect in the draft analysis game. More people than this are gaga over this haul.

We can’t say “it’s a rebuild, we will win 4-5 games at most next year… then say I hate our lbs and wrs wtf?

Maybe they love perriman and T Will (one of the) as a WR2, and believe Cephus could be a really good player?

With a record bad D, no golladay, etc

We were competent on offense with Jones, Ammendola and Cephus.

Maybe the FO wants to see Goff with modest weapons. Swift and Hovk should leap forward.

Golden rate and Amon Ra and its “ok”

I think they address needs in the second phase of FA once comp pick stuff is over. Several one and two year deals.

Cox in the 4th today would wrap it up imo…but he must like to punch kittens and blow up orphanages the way he’s fallen, so I dont expect them to snag him if he’s there. I look forward to watching Tavai contribute to our 5 wins or less this season with his fire hydrant type LB play this upcoming season…2022 draft should be a windfall for this team at LB/S postition simply due to our current shitastic LB core ironcially…I see the plan.

If the DTs can drastically increase the pressure on opposing QBs, then it directly addresses the team’s biggest issue.