Dan Orlovsky on Twitter shared a picture of Caldwell quotes -

Which quotes do you think Dan C should read ?

Why is this posted as off topic? 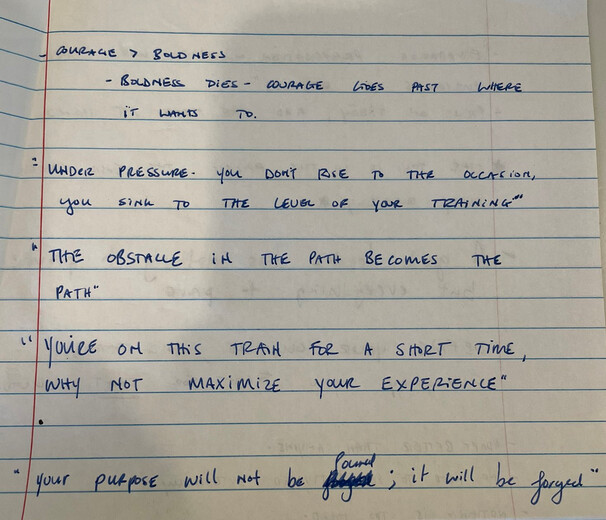 The “Under pressure you don’t rise to the occasion, you sink to the level of your training” I’ve heard in a couple places. It was quoted exactly like that by our weapons instructor in one of our gun-owners outings.

Pastor Chuck Swindoll used a variation of that in a lesson many years ago. (Something more like “When faced with an extreme trial, you don’t rise to become all that you imagine or hope that you’re capable of, you default to the least that you are.”)

I had to write them down, because I found the handwriting a little difficult to read.

Certainly more appropriate than that New Orleans coach who said,

Kill the Head and the Body will Die.

Five as I relate it biblically

It seemed like that one fit their narrative on one season

My favorite football quote (can’t remember who), in a post game interview after his team got beaten was asked…

“How do you feel about the execution of your team?”
Coach’s reply…
“I’m all for it!”

I think McKay in Tampa

The “Under pressure you don’t rise to the occasion, you sink to the level of your training”

Completely agree. Training Muay Thai, Jiu-Jitsu and MMA over the last 10 years has given me fair perspective. You can find it more in Jiu-Jitsu practitioners that haven’t trained in anything else… they aren’t conditioned to someone throwing punches, kicks and elbows at them… let alone getting hit by those strikes. So if they are finding themselves on the bad side of a situation that’s compounding fast you can see them resort to what they have actually trained, and many times in that particular moment it’s the last thing they should be doing. Finally getting that takedown on the dude who was kicking your ass inside the bar was great until his friend came up and soccer kicked you in the head.

The Obstacle In The Path Becomes The Path

This is a direct quote of one of the core tenets of Stoicism, normally seen as

“The obstacle IS the Way”

-Roman Emperor Marcus Aurelius.
(the old guy in Gladiator who gets capped by The Joker)

My favorite quote of all time is from Marty Morningweg.

When you take the wind in overtime you better have a damn good defense.

My favorite football quote is from Tom Moore while he was with the colts. He was asked why the backups at QB don’t get more reps. He responded… “well if 18 goes down we are f*****d. And we don’t practice f****d.”

I had to write them down, because I found the handwriting a little difficult to read.

The quote from Marcus Aurelius read, “The mind adapts and converts to its own purposes the obstacle to our acting. The impediment to action advances action . What stands in the way becomes the way.” It is from his Meditations, Book 5.20.

Honestly I would be surprised if any of these are Caldwell originals but really just favorite’s of Caldwell. Which isn’t a bad thing or a knock on Caldwell. Lots of people adapt famous quotes to their situation.

I assume none of them are originals, nor were they presented that way.

I assume none of them are originals, nor were they presented that way.

The one about sinking to your level of training is used constantly by Navy Seal instructors.
Basically says that you have to train to the point that when sh*t is hitting the fan your reactions are done without thinking because you have trained for that to the point it becomes automatic.

It originated in Ancient Greece (like many famous quotes)

Never underestimate the cool shit that bald dudes can come up with.
-BigNatty (original quote)

ya might want to tuck that one in your back pocket for draft day too, guys!

The Obstacle In The Path Becomes The Path

This is a direct quote of one of the core tenets of Stoicism, normally seen as

“The obstacle IS the Way”

-Roman Emperor Marcus Aurelius.
(the old guy in Gladiator who gets capped by The Joker)

It is one of my favorites.

My total favorite, which can be applied to sports, business, sales … just about anything, is one from Henry Ford that I first heard our CEO say at a sales conference.

That quote about the power of positive thinking literally can be applied to almost everything in life and drove me to a whole lot of success.

(the old guy in Gladiator who gets capped by The Joker)

LOL - Thank you for putting it into terms I could understand, my man.