I saw a “way to early 2022 mock draft” from last year that had the Lions drafting Carson Strong #1 overall in this draft. How about taking him in the 7th instead just to show how idiotic those mock drafts are. Guy does have skills.

Something to be Strongly mocked

That dude’s knee must be a total disaster… like almost no chance of regaining his form.

It makes me think of when I ruptured my patellar tendon. The surgeon told my wife, “It looked like a grenade when off in there.” (I’m fine, but different injury)

Maybe we can still get him as an UDFA.

A team with Gardner Minshew as their backup gets him while we have Tim (I sucked in college, and now I suck for the Lions) Boyle. What is it with the Lions and drafting QBs? Smart teams draft QBs.

Who knows. It is a head scratcher their love of boule. But they have shown to be very competent thus far.

do we have first dibs on cuts after jacksonville? maybe they’re waiting for baker mayfield to get cut. better than tim boyle.

I guess I’m the only one here who doesnt care who the backup QB is this year. If Goff goes down and we suck I’m fine with it because of the better pick for a top QB

It is a head scratcher their love of boule. But they have shown to be very competent thus far

I’m not trying to be negative, but just pointing out that the Lions have gone from Matt Stafford to Jared Goff plus Tim Boyle at the QB position since this current brain trust took over. QB is the most important position in sports.

I think the label of “very competent” is a bit premature yet. This brain trust has to do a lot better than 3 win teams. Here’s hoping they are capable, but until then, I’m not crowning anything in the offseason when literally all 32 teams are at their most optimistic

I think the label of “very competent” is a bit premature yet.

Given what we have seen this far with two years of player acquisition I would suggest they are very competent as I said. Goff is not a bad qb, I am by no means a Goff Truther, but he can win in the right environment and he can be a top 15 qb. So I’m not worried about Goff. If he struggles then we can look at his replacement next year. I’m really not worried about backups in most cases if your backup is playing a lot you are losing games anyways.

More mock draft madness from May 2021: 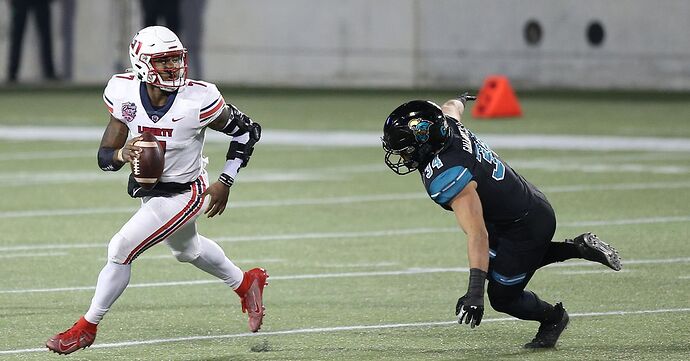 Many experts are already connecting the Lions to a QB in 2022, but which one?

I would’ve rather traded for Minshew last year for a 6th than what we gave up for Trinity Benson.

I’d still love Minshew as I think he’s the best backup in the league right now.

HA, I just saw your name, I remember that song, “Mr. Dobalina, Mr. Bob Dobalina” who was that? Did that come out around the same time as “detachable penis”?

You know whats great, I can think of three backup college QB’s that are better than Minshew and Boyles.

There is no way Mccarthy is better than Minshew right now. More potential… sure.

Definitely came out that same era!

We’ll see this year. So far this brain trust has 3 career wins. I am old enough to remember this board believing Rod Marinelli was going to keep the pad level low enough to turn this franchise around, that Gym Shortz spanking to Jahvid Best was not the SOL, and that Matt Patricia was a rocket science genius who had the Lions “on the right track.” I’m truly hoping this time is different but it’s interesting to me how much love and faith this front office gets with 3 career wins