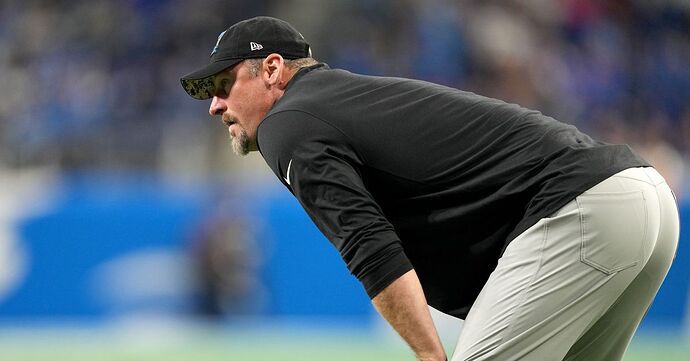 Debating the pros, cons of Lions’ late deep pass on third-and-1 vs. Bills

The Detroit Lions made a controversial choice to go for the win on a deep-shot late. It came up short and the Bills had enough time to win.

This seemed to me to look like Campbell didn’t know which approach to take….go for the win with a TD or play for a FG and an “ apparent” OT.

If going for the win, he should have used some TO there.

I personally have no beef with the 3rd and 1 call.

Connect there and a TD is possible.

This. The fact that we are questioning individual plays is a win in itself

I agree with @mooseamoose and I said so during the game thread. BJ is calling the plays, not Dan. Dan trusts him and he made the call and personally I have no issue with that call. Just because it doesn’t work doesn’t mean a run wouldn’t have been stuffed, percentages be damned. It’s the NFL.

This. The fact that we are questioning individual plays is a win in itself

Yep, that’s how close the game was.
Somehow, our Lions team that is low on talent and has a bad QB is able to go toe-to-toe with arguably the best team in the NFL.

A run or “easy” pass likely plays for a tie

If the Lions convert on third down with a “safe” play, they likely have to burn their second-to-last timeout, leaving them with 30-ish seconds and one timeout from the 30-yard line or so. Sure, you have a little bit of time to still score, but not much. Given how slow the Lions had been moving the ball, it was unlikely they’d find the end zone in time.

In essence, this was their one shot to win the game in regulation—and it was damn close to working.

Counterpoint: At the very least, a conversion will run out the rest of the clock and play to overtime. At the most, a conversion still gives you an opportunity to take another shot or two. A deep shot basically limits you to one play to win it in regulation. And if you don’t make it, it’s not like a 51-yard field goal from Michael Badgley is a sure thing. The guy missed from 29 yards out a quarter earlier.