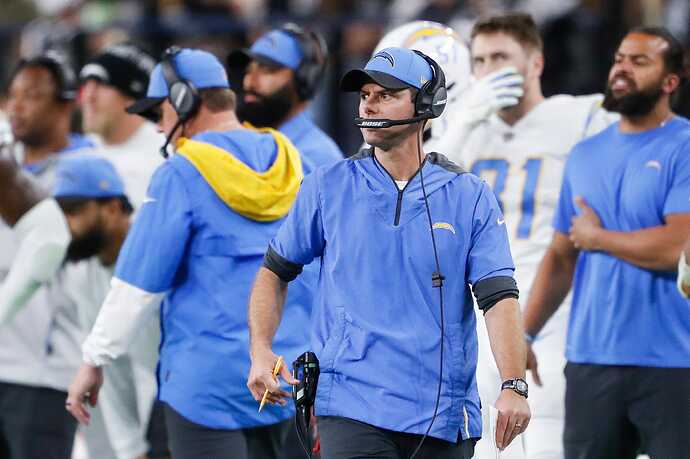 Lombardi: ‘No owner I’ve worked with would have kept Brandon Staley after...

Former Browns GM Michael Lombardi said, “No owner I’ve worked with in the NFL would have kept [Chargers coach] Brandon Staley after this season.”

Didn’t he have the best record of Rookie HCs? Seems like Hyperbole to me and how good were the Browns ever under Lombardi?

He inherited Herbert Ekeler, M Williams and Keenan Allen, a Bosa and a solid team. Not sure that’s an apt comparison to taking over after Dr. Evil and Fat Bastard strip mined our roster for 3 years…

Lombardi knows what he’s talking about. He’s an expert on getting fired.

What was he bashed Detroit about that some of us pushed back against pretty hard a couple years ago?

But … but… Staley followed the analytics…

That was an absolutely terrible decision. That is an end of game decision or a down by multiple scores in the 4th decision.

What I don’t understand is all this griping over the TO. I watched the entire game and when Collinsworth and Al were going on about it I was thinking what the hell was I missing here? They let the play clock run all the way down to like 4 seconds and under 40 seconds on the clock before they called it. They were just gashed for a long run the previous play. Why not call a TO get your best run defense on the field and give your guys an extra minute to catch their breathe? Literally did not change anything. The only reason the Raiders kicked the FG is because Jacobs got another 10 yards.

You have all these talking heads saying that timeout should get Staley fired, like WTF? It was the correct decision and literally had zero impact on anything.

Derek Carr mentioned something about the TO after the game, but you really think he knew wtf he was talking about. He was all hyped up. They were running the ball before the timeout and ran the ball after the TO. Carr said they were always going for the win right after he said that which was also BS. The Raiders played for the tie, but the Chargers defense was so damn awful against the run on that drive that they couldn’t help, but try the FG.

They were 100% going for a field goal and the win regardless of the timeout… it was all simply based on clock and yardage after that third down play.

The timeout backfired, but not wasn’t as stupid or “game changing” as some media blowhards are making it out to be.

I find it interesting the backlash some get for following or incorporating analytics. I believe Campbell said it’s a tool to be considered in game situations along with a lot of other things. Now I haven’t watched the chargers or followed them, but I do recall an interview with Staley where he talked about the importance of the run game, I think it was posted here, somewhere, and his viewpoint and approach were pretty well received.

I see a new trend in the NFL with younger coaches getting opportunities, and the young guys come with new ideas. DC is in that group, as is Staley. Part of what confuses me sometimes about what fans want is they want an “experienced” coach who’s “innovative.” And hat does that really mean? Wouldn’t using new information and approaches qualify as “innovative?” Sometimes it doesn’t work, but then you have those experiences to add to the information and data they continuously gather, which leads to constant updating and adjustment in philosophy and approach.

I guess what I’m saying is you can’t always have it both ways… you have young coaches with new ideas and you have to allow them to implement their ideas, and sometimes they work and sometimes they fail, and you hope it leads to growth and greater success later. But that’s a good thing! Does anyone really think Jimmy Johnson could come back to coaching now and be as successful as he was? Or even Jim Harbaugh who’s been out of the league for a few years?

The Lions of course had the opposite of a young innovative coach in Patricia who was young but was more stubborn than an 80 year old man.

We actually have a young, innovative, out of the box forward thinking coach now! I think some of these decisions these guys like Campbell and Staley make get blown out of proportion when fans and media are not seeing the forest for the trees.

We actually have a young, innovative, out of the box forward thinking coach now!