Agreed, but isn’t this also a knock on the Jets evaluation process…like you said Wilson was known for this in college.

Perhaps but they probably saw that arm talent and ability to improvise outside the pocket and figured it was worth the risk. He’s still salvageable but he needs an attitude adjustment and I don’t think the Jets can afford to let a promising season spiral out of control while he tries to figure it out.

That is the only game this year that i turned it off before half, i knew the team just wasnt in it from the start… to follow it up with dallas and see goff and williams basically give the game was so disheartening. Now we are here in the midst of a 3 game win streak and have an opportunity to not only be on the graphic but make the playoffs in year 2 of this rebuild (not predicting but they have a shot if they play like they have shown they can). Amazing what a few weeks of development can do with a young team

Haha fair point, but his offense scored more points than the Lions did!

At least they had Garrett Wilson to throw to. Goff had…Kalif Raymond?

In any event, Belichick is a god damn game planning mastermind, I think we can all agree with that.

In any event, Belichick is a god damn game planning mastermind, I think we can all agree with that.

Yep, that was my main point the whole time. You watch now, White is going to look great vs the horrible Bears D and the media will praise Saleh for the move, but in reality he’s just facing a dog shit defense.

Yep, that was my pain point the whole time. You watch now, White is going to look great vs the horrible Bears D and the media will praise Saleh for the move, but in reality he’s just facing a dog shit defense.

It’s not like Wilson was lighting it up against any defense. 4 TDs in 7 games, 2 against NE btw. Woof

Just another cautionary tale for all the draft QB’s in the first round early fellas!

Benched in year 2 after being the 2nd pick overall, good luck going back to Wilson later on in the season or next year now. Yes, he’s struggling, but benching him is how you ruin any chance at development and crush any confidence he had left. And let’s be honest the Jets might make the playoffs, but they are going to get killed in the playoffs no matter who is playing QB.

They had to do it. It’s not just Wilson struggling, he took zero accountability for his poor play and has his receivers and the defense pissed at him and dividing the room because he’s acting like an entitled brat (which was a big knock on him.in college btw). Not to mention that he’s been actively hurting their team with poor play.

Saleh really had no choice, especially with the season in the balance, to make the change now.

Yeah, that’s what the sad part was. Had Zach just said that he had to play better and he’s going to do everything in his power to make that happen, it would be totally different. Instead, he said they didn’t let the defense down, after having 3 yards of offense in the 2nd half. Oh well, I think Zach was just pissed and bitter and just said what he said to lash back at the reporter. He’s got some growing up to do.

It’s not like Wilson was lighting it up against any defense. 4 TDs in 7 games, 2 against NE btw. Woof

Not only does he suck, he thinks he’s great! haha great pick to lead the franchise! I like this though, we gotta play the Jets soon. Time to crush 2 NY teams and we can officially own that field.

Evidence of the Aryan Master Race?

That’s what happens when you start boning your mom’s best friend. Football is no longer a priority. Suck it Jets.

That’s what happens when you start boning your mom’s best friend.

Some guys like Cougars… maybe his mom’s friend had the last name Hutchinson by chance!? lol

Just another cautionary tale for all the draft QB’s in the first round early fellas!

It wasn’t bad process, they just chose the wrong guy. I miss on plenty of QBs but Wilson was one I nailed, had him rated a round later and by far the most likely candidate to bust in that class. I thought they should have taken Fields then and I think so even more now.

But you’re right that sometimes there’s just no QB to take, you can’t force it. That’s how I feel about this class… except Bryce Young.

He never knew how.

That 11 TD 9 Int sophomore year is just as real as what he did the following year. 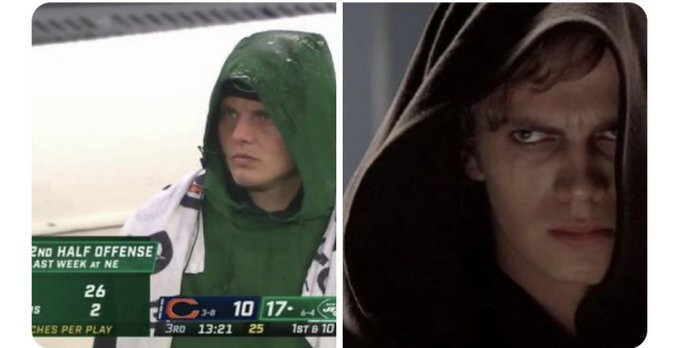