Lions lead the league again with Cap dollars on IR

Such is life as a Lion’s fan

Teams starting off badly with players on various reserve lists (not including suspended): Lions, Dolphins, Falcons, and Titans with $20M in player contracts sidelined this week (NFL avg. is $11.7M) 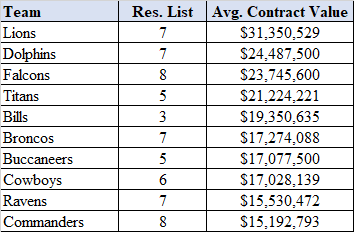 Over half of that was expected months back, romeo and williams. Vaitai is likely the main one that was unexpected.

IMO, Romeo’s not much of a loss.

Vaitai is a bigger deal.

Not if you don’t stop drafting injuried players high.
Hell we got a 1st and 2 2nd round pics from the last 2 drafts on IR now. One has played sparingly and has pretty much the same injury as when he got drafted.

Before they even play on snap in the regular season.
After all the koolaid that’s been poured it’s natural for the fans to be pissin early.

Not if you don’t stop drafting injuried players high.

They can’t “get hurt” if they are already hurt. Beat the IR to the punch by already drafting IR players.

That chart doesn’t bother me as much as it would if those were all season ending IR players. The great majority of those guys will be back in a month.

But, but, but we got reinforcements coming for our playoff run…

But, but, but we got reinforcements coming for our playoff run…

The great majority of those guys will be back in a month.

That’s what my daddy told me when I was little. He has a new family now. (j/k)

Why let facts get in the way of a good diatribe?

It also a fact that Levi has been injuried sense he was drafted.

It’s also a fact that Holmes has had 5 pics in the first 2 rds in the last 2 drafts and 3 out of 5 have been injuried players. 2 are on IR and one can’t play because of the same bad back that he was drafted with.

I was thinking Levi was on IR my bad. But I’ll bet he’s on IR before he makes a impactful play.

Edit: I’m on a phone on the road and too lazy to look it up

who the hell is eating up the $26M

Hali and Romeo I would guess is the biggest amounts.