Really wondering why he hasn’t appealed.

Still no idea on why Lattimore was ejected. Violated the Tom Brady halo of breathing?

Still no idea on why Lattimore was ejected. Violated the Tom Brady halo of breathing?

He was pulling a punk move by getting in Brady’s face, and Fournette did the right thing and pushed him away. Players have defended their QB’s for a loong time … its probably the right thing to do.

Of course Lattimore fought back and shoved Fournette, and then got leveled by Evans. Then he fought some more. It’s all right there on tape. Take part in a fight, you might get ejected. Not really shocking to me.

Players get in Players faces on every single play of every game. Not sure why Brady is exempt. And it’s pretty stupid to do when there are no other receivers on the team.

Just as soon as they get done playing the Pack.

Maybe the NFLPA told him he doesn’t have a case? Evans has gone after Lattimore in the past, and what he did on Sunday was about as egregious as you can get without throwing a punch.

Tampa is expected to sign Cole Beasley as at least a stopgap. I’m a little surprised he was still a FA coming off two solid seasons in Buffalo.

Just to be clear…Brady was the aggressor on this one. The 2 guys passed by eachother and Lattimore just waived his hand to tell Brady to get off the field, or stop crying. Something to that effect. It was Brady that then turned around and walked towards Lattimore yelling at him and calling him a bitch.

just waived his hand to tell Brady to get off the field, or stop crying. Something to that effect

Like I said, punk move. They both should have just kept walking. This especially includes Lattimore.

I also hear that Arians was bumping his gums on the sideline at players. He needs to check himself as well.

Apparently Evans now plans to appeal. Hopefully he gets to play Sunday.

Really wondering why he hasn’t appealed.

Remember that TMZ video prior to the draft with him going berserk in the parking lot outside a night club?

This all reminds me of Earl Weaver running out to the umpire and getting tossed to light a fire under his team. It has the same feel. Bucs aren’t looking right and needed a fire. Now they have one.

Like I said, punk move. They both should have just kept walking. This especially includes Lattimore

Well, they’re not wasting any time… 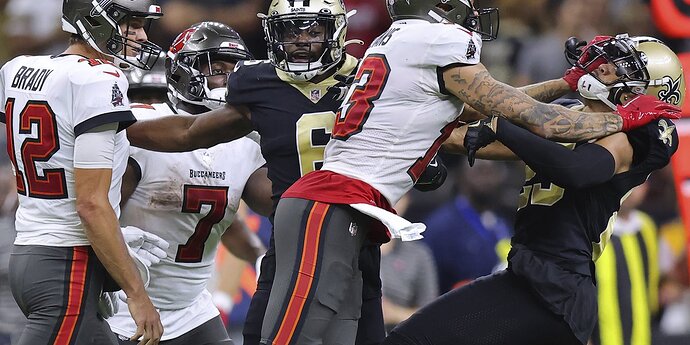 Probably they will suspend Lattimore for falling too close to Brady.

Even if you are a Mich/Brady sloppy like @thunderbuzzworth this was fairly obvious. You can still be a fan and say he was at fault. No one’s perfect.

I just rewatched it. Lattimore was jawing with everyone, including the sideline, and then got in Brady’s face. Fournette was correct in removing the player from his qb’s personal space.

Roll your eyes all you want. Fournette did the right thing.