Just wanted to throw his name out there for you guys to check out. 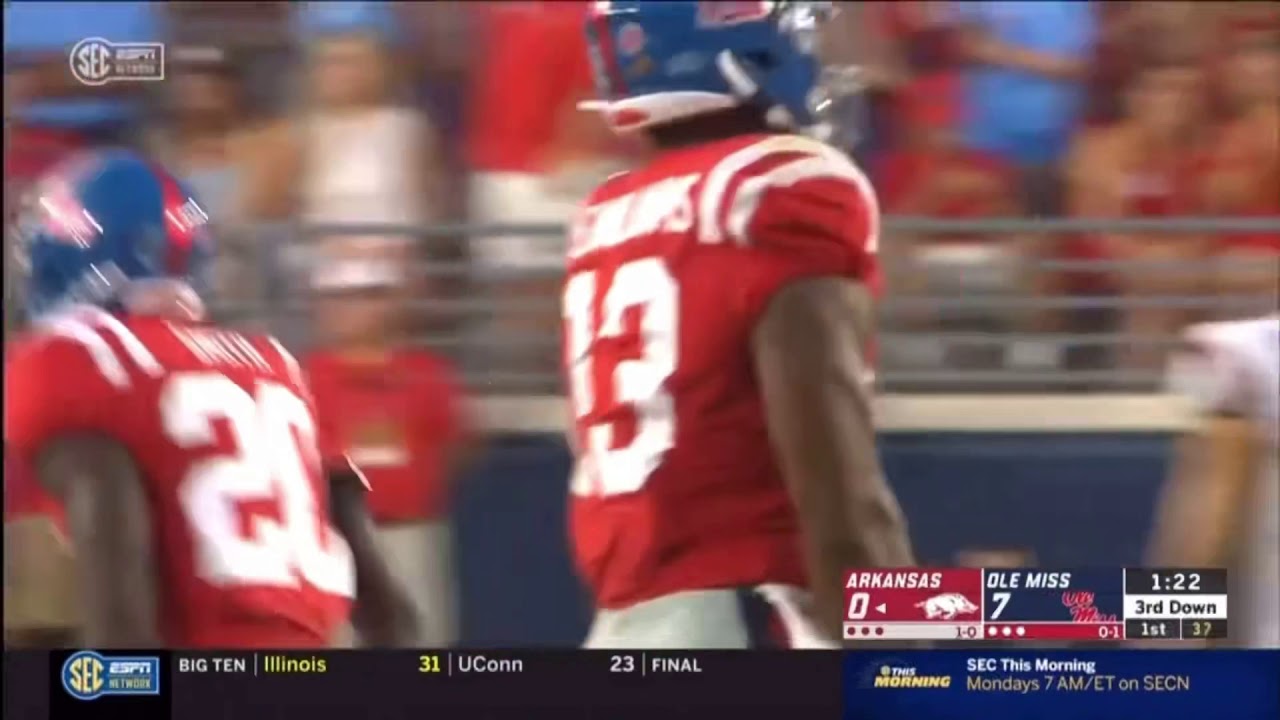 Looks big, strong, fast, smart, relentless, with a streak of nasty. If the hi light reel is representative of his play, he’d be a fun one to see throttling Love, Cousins & Fields into the earth.

Can we get him in a trade back?
What’s the difference between the impact this dude and Thibz have on a game?
Where is he projected to go?
Does he shave his head? If not, is he willing to?

There are numerous former JUCO players in the 2022 NFL Draft pool, and Ole Miss DE Sam Williams falls into this category. Williams took the path less traveled to the FBS level, but he’s now established himself as a rising defensive playmaker. However, while he has the requisite production, does Williams’ scouting report hold up against heightened scrutiny?

We’ve seen in recent years how athleticism can be a catalyzing force for a player’s ascension. For players with athleticism, the question isn’t about what their ceiling is, but whether they’re capable of reaching it. Williams, at the very least, has this high ceiling to ponder.

At Ole Miss’ Elite Camp several years ago, Williams reportedly logged a 4.4 40-yard dash and a 40-inch vertical. Since then, he’s tacked on 15 pounds and now stands at around 6’4″, 265 pounds. Williams checks almost every athletic box. But as we know, athletes and football players are two different things. Can Williams be a productive football player at the NFL level? Let’s take a look.

Williams’ reported numbers are exciting, and his tape largely confirms what’s been reported. The Ole Miss DE has an exceptionally quick first step for his size. He also brings impressive closing burst at the contact point. When unblocked, he shows off intense closing speed, and he also possesses the pursuit speed necessary to close off runners on the outside.

Williams can cover a ton of ground around the edge with long, powerful strides, but his physical strengths extend beyond his straight-line mobility. The Ole Miss DE sports a compact, well-built frame with a great deal of stored power. Additionally, he has good length for his size, which he can use to assume positive leverage. With his explosiveness, density, and length, Williams can be dangerous on bull rushes.

Expanding on his frame, Williams’ strong base allows him to maintain positioning in the run game. The Ole Miss DE has also shown he can disengage blocks promptly and wrap up ball carriers. He has the upper body strength to wrench down anchors when stacking against the run, and he’s a sturdy tackler who engulfs opponents with his length and mass.

Among other things, Williams has the athleticism to drop into coverage on occasion, although he’s not instinctive or dynamic in that aspect. He flashes lateral agility in space, and he also has the capacity to accelerate while turning around the edge.

Execution beyond the physical traits

As you’ll soon see, Williams is still a major work in progress from an execution standpoint. Nevertheless, his physical foundation gives him some exciting upside if he can build on his current level of refinement. Williams shows the capacity for fast, violent hand usage, and he’s also flashed targeted hand maneuvers when ripping down opposing anchors.

In the thick of the trenches, Williams generally plays with a good pad level. He can get below his opponents and establish leverage, by which point his length only becomes more dangerous. The Ole Miss DE also shows glimpses of good leg drive when anchored.

Rounding out his operational strengths, Williams can keep his balance against cut blocks and regain speed quickly. Additionally, he regularly jaws off at offensive players. He’s eager to get inside the heads of his opponents. While this may run against him at times, having that edge is a plus, especially in the trenches.

The upside with Williams is enticing, but there’s no sugarcoating it — he needs a lot of work. Williams can bring more juice off the line at times. His motor runs hot and cold, and he doesn’t always show urgency when changing directions. He has little proven twitch or suddenness, and this impacts his ability to generate lateral displacement.

Williams’ hands and recognition ability are both particularly unrefined areas of his game. The Ole Miss DE was not polished with his hands in 2019, and he didn’t markedly improve in 2020. He still needs more violence and precision, and he can also be more consistent stacking counters on pass-rushing reps. His hands don’t always strike cleanly, and this mitigates his force potential. Furthermore, his extensions aren’t always timed well.

Williams lacks a consistent pass-rushing plan, and this can cause him to be rather tentative at times. He doesn’t always play to his athletic maximum, and his feet are sometimes idle as he attempts to read plays. The Ole Miss DE is slow to react to options and ball transfers, and he’s baited frequently by misdirections. His inconsistent attack angles can afford opponents enhanced leverage. He also gives up too much surface area at times.

The dichotomy between Williams’ athletic profile and his executional profile is incredibly stark. Athletically, Williams checks almost every box. He’s long, well-built, explosive, and sturdy, and while his bend isn’t great, he has displayed measured flexibility around the edge. Mentally, however, Williams is undoubtedly a project, and his lack of major progression in 2020 is alarming.

Williams can generate pressure and discomfort with his raw traits alone. However, at the NFL level, he’ll need to combine those raw traits with hand usage, awareness, and multitasking ability if he wants to be a starter. With this in mind, Williams’ draft range is large. If he develops in 2021, he has Round 1 upside. Yet, his lack of refinement, as well as off-field red flags, could render him a Day 3 pick.

As mentioned earlier, Williams ultimately took the JUCO route to the FBS level. He played football at Robert E. Lee High School in Montgomery, Alabama, and signed with Northwest Mississippi CC after high school. At Northwest Mississippi, Williams kick-started his career and went from a complete unknown to a coveted playmaker.

Williams stood out as a freshman on the JUCO stage, amassing 53 tackles, 11 tackles for loss, 3.5 sacks, and 2 forced fumbles. His encore season would prove to be twice as prolific. As a sophomore, Williams brought forth 75 tackles, 28.5 tackles for loss, 17.5 sacks, 4 forced fumbles, and 4 pass deflections. Williams was named MACJC Defensive Lineman of the Year for his play and earned a four-star recruit billing as a JUCO transfer.

Williams opened up his FBS recruitment for the 2019 season — teams lined up upon seeing his production and athleticism. He received offers from LSU, Oregon, and Auburn, but the DE ultimately chose to stay in Mississippi and signed with Ole Miss.

Williams enrolled early with the Rebels and wasted no time adding to his stat sheet. As a true junior in 2019, Williams started eight games in his first SEC action and played in 12. Over that span, the Ole Miss DE accumulated 38 tackles, 9.5 tackles for loss, 6 sacks, an interception, and a forced fumble.

Williams was immediately expected to return as a defensive catalyst in 2020, but during that ensuing offseason, Williams’s future was doubted. In July of 2020, Williams was arrested on a felony charge of sexual battery. He was subsequently suspended for an indefinite period of time by Ole Miss.

Little information was revealed regarding Williams’ case, but his charges were ultimately dropped less than two months later — the suspension was lifted as a result. The Ole Miss DE put up another productive year, logging 39 tackles, 8 tackles for loss, 4 sacks, and a forced fumble in 10 games.

First and foremost, Williams’ off-field history demands careful attention. Williams’ charges were dropped, but that shouldn’t preclude NFL teams from doing their own research. Williams needs to pass the character inspection before any teams deem him worthy of a roster spot. Thus, the details of his trepidatious history are relevant.

Even without considering off-field factors, however, Williams is still a polarizing NFL Draft prospect. He has the athletic profile to generate excitement, but outside of that, he’s underdeveloped and in need of serious refinement. The 2021 campaign will be massive for Williams, who’s set to be a 23-year-old rookie. If he wants to carry his production over to the NFL, he’ll have to take the next step.

Really good player and a freak of an athlete. Bit of a shithead from what I understand. I imagine the character side of things will determine just how high he goes.

Really good player and a freak of an athlete. Bit of a shithead from what I understand. I imagine the character side of things will determine just how high he goes.

So we draft him in the 2nd round, and I work with him, he becomes our most dedicated and ferocious dude.

Where is he projected to go?

I, who have read every draft thing there is to read and check every website there is to check, literally did not know about this guy until I saw this thread.

If that doesn’t tell you something, I don’t know wha does.

Sam Williams? That surprises me.

I’ve mentioned him before, not sure how his personal history will write his NFL future, we’ll see. This guy has 10 sacks, 2nd in NCAA, and 4 forced fumbles, first in NCAA, Will McDonald IV from Iowa State. 6’4" 245 he’s also in the conversation. Overall Iowa State has the #4 ranked D in the NCAA.

I watched a couple games and he seems a 1 trick pony to me. He can rush the passer but that is about it. A seriously liability in the running game. I’ve watched him get easily blocked over and over by guys smaller than him.

Another victim and another childhood dream to ruin.

Cameron Goode at Cal is an underrated Edge prospect. Not all that flashy but a damn good player. I think he’ll have a long successful career.

Where is he projected to go?

I, who have read every draft thing there is to read and check every website there is to check, literally did not know about this guy until I saw this thread.

If that doesn’t tell you something, I don’t know wha does.

Tells me you need to start digging deeper Holmes ; )

I brought-up Sam Williams back in Nov. Anybody got a target on where he might be taken?

I think if we miss out on Hutch, maybe someone like Sam or Jermaine Johnson would be a nice consolation.

He’s a great athlete but we already knew that. I think he’s gonna be hard to pin down because he’s got some pretty major off-field red flags and we won’t have any idea how the teams feel about those. He seems to have gotten more focused since having a child, but it’s hard to know.